00:00 / 16:39
Spotify Stitcher
RSS Feed
Share
Link
Embed
With two big events on the horizon—the Fan Xperience in April and the second annual Salt Lake Comic Con in September—Farr and Brandenburg also managed to capture the attention of George Takei, Star Trek alum, meme enthusiast and outspoken advocate for equality. Together, they created a comic con pre-event in which fans could meet their favorite USS Enterprise helmsman. 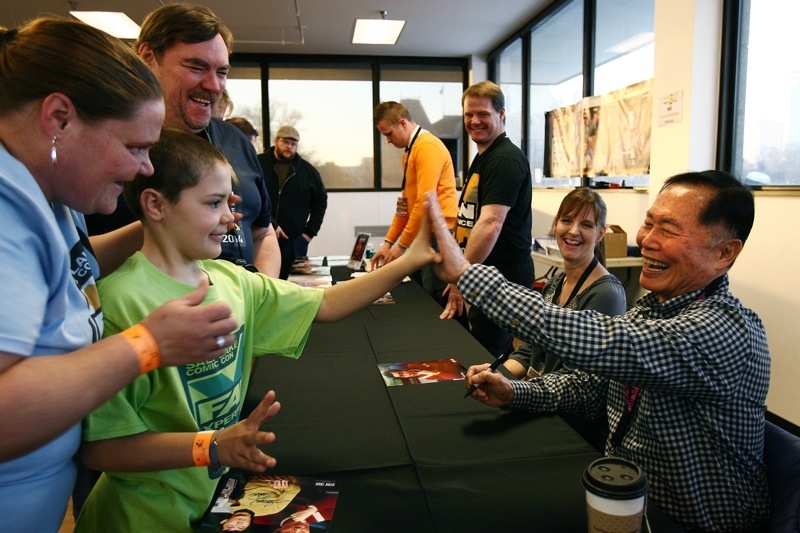 Anyone who was living, working or trying to find a parking space within a five-mile radius of last year’s Salt Lake Comic Con can attest to one simple fact: When a crowd of over 70,000 attendees dressed like superheroes descended upon the Salt Palace Convention Center, something very special was happening to our fair state.

Though last year’s event was nothing short of historic—it boasted the highest first-year attendance rate of any North American comic con—event creators Dan Farr and Bryan Brandenburg have no intention of scaling things back. “We have at least 200 percent of the momentum that we had last year,” Brandenburg says.

Both Farr and Brandenburg managed to turn their combined experience with social media and marketing to turn last year’s comic con into the runaway success that it became. “To put it in perspective,” Brandenburg says, “the highest attendance rate at a previous Utah convention was 27,000. We brought in 72,000, which was three times that amount.”

With two big events on the horizon—the Fan Xperience in April and the second annual Salt Lake Comic Con in September—Farr and Brandenburg also managed to capture the attention of George Takei—Star Trek alum, meme enthusiast and outspoken advocate for equality. Together, they created a comic con pre-event in which fans could meet their favorite USS Enterprise helmsman. In a serendipitous chain of events, Takei was in town for this year’s Sundance Film Festival, to promote To Be Takei a documentary about his film career and internet celebrity. “We arranged for him to come a day earlier so he could do this event. It’s great because it helps make people aware of this year’s Comic Con while giving Mr. Takei a chance to meet some fans and promote the film,” Farr says.

Speaking of fans, The Leonardo was packed with locals that were eager for some face time with Takei before his scheduled appearance at Sundance. Takei has always been extremely gracious to his fan base, and tonight’s event was no exception. A smile never left his face during the entire five-hour event, and the crowd’s enthusiasm was contagious.

Based on the response to this pre-event, things are looking pretty good for Salt Lake Comic Con’s upcoming events. April’s Fan Xperience promises a lineup of over 100 celebrities from all over popular culture—including Norman Reedus, Chandler Riggs, John Bernthal, and Laurie Holden from AMC’s zombie-infested The Walking Dead. Though Farr made no confirmation, he appeared optimistic about the possibility of getting Patrick Stewart to round out the cast of Star Trek: The Next Generation.

Scheduling for the Salt Lake Comic Con in September hasn’t been finalized as of yet, but with the rabid enthusiasm that fans demonstrated last year and the support of local government—Governor Herbert personally picked Stan Lee up at the airport and delivered him to his scheduled appearance at last year’s event—it’s safe to expect some exciting programming. “The real thanks goes to the people of Salt Lake,” Farr says, “With so much support, the opportunities are endless.”

To keep tabs on the upcoming Salt Lake Comic Con events, get ticketing info and check the ever-expanding lineup of celebrity guests and programming, visit saltlakecomiccon.com.