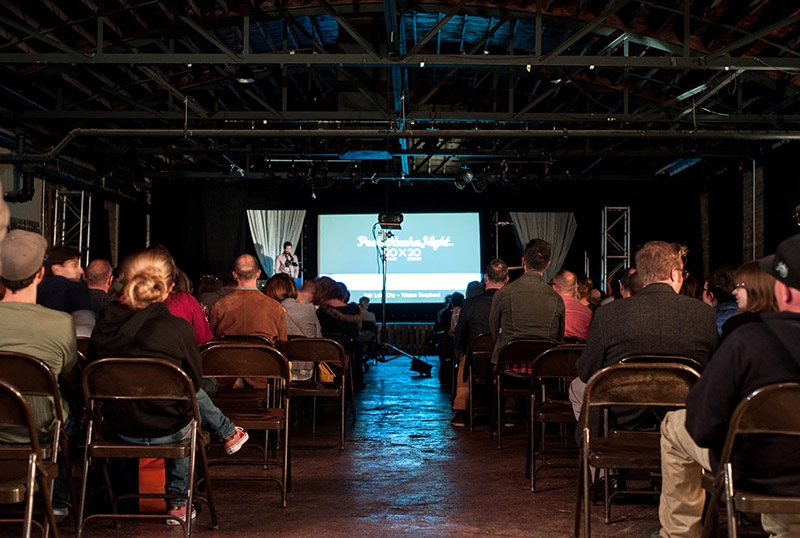 Many SLUG readers will be familiar with PechaKucha Night—having either attended one in person or read about it here. Salt Lake just had its lucky number Vol. 13 PKN on the 13th of October. Thankfully Camp Crystal Lake’s Jason did not attend, likely because he only goes out on Friday, and this event was held on Monday night. SLUG was invited to attend.

The venue was spectacular. I made my way to the industrial district at about 600 S. and 600 W. at 6 p.m. A different person might have made a call to their mystic for a quick tarot fix over the phone, but that particular chain of numbers just made me think of Iron Maiden. Our arrival to blue-collar Salt Lake was garnished with beautiful sideways orange light passing through the freeway support beams, outlining the stagnant locomotive that was parked across the street from the entertainment venue where the event was to be held: The Fallout. It felt like I was arriving to a movie premiere in a coal mining town.

For a full explanation of what the event is, see SLUG’s coverage of the recent PKN Vol. 12 . Here is a summary: PechaKucha is a chance to hear from a variety of speakers on any number of topics. The unique thing about it is that every speaker is limited to twenty slides and twenty seconds to talk about each one. This keeps things both fast and interesting, as no speaker has more than six minutes and 40 seconds to make an impression. The concept was invented in Tokyo, and it has spread across the world to almost 800 countries. They call it the 20×20 format.

The event was popular, as evidenced by the massive line for beverages. I can imagine that whoever worked in the repurposed industrial building years ago would have never believed that someday spiffy looking urbanites would line up for $10 mixed drinks where they had once clocked in every day. The event marks the first of SL Design Week, a celebration and inventory of SLC’s aesthetic talents—and what a fitting environment for that it was. I would describe The Fallout’s design motif as modern smokestack apocalyptic, though I’m sure the great minds behind it would scoff. I can’t speak about interior design with authority, however, because I own a bean bag.

I ran into SLUG’s own valiant captain, Angela Brown, who was there to help introduce the speakers—all of which participated in this year’s Craft Lake City DIY Festival. Each one is a creative, though their mediums of choice differ as much as Carlton and the Fresh Prince. Though no PKN has a definite theme, DIY was present in almost every presentation we heard. Tristan Shepherd—the event’s organizer—believes that PKN has an important place in SL Design Week. “I think it has been successful as the opening night event because it allows us to pull from all the disciplines, bringing everyone together,” he says.

The presentations opened with a rousing sermon on the superiority of oil for skin care given by Denise Cartwright, creator of CRUDE Personal Care. I never thought I would hear a kick-ass speech on how to wash my face, but Cartwright delivered with humor, conviction and power. We heard from Bree and Nate Millard of Ban Supply Company, who brought along some of their gorgeous wood cut art which was displayed prominently on the walls of the presentation hall. They told us how they are currently working with Uinta Brewing to make giant wood cut representations of their beer labels. Elise and Even Barrett-Caston of Go Make Play told us about their project kits for kids that help inspire creativity and get kids to work with their hands and use their minds. Speaking about why they do what they do, Elise says, “We hope that more people will begin defining themselves as creative and brave.” Annika Dimeo of Annika Quinn Jewelry told us about her creative process and showed pictures of her handcrafted metal jewelry. She showed various unique pieces that all looked like they might proudly be worn by Wonder Woman if she lived in Sugarhouse. “I like taking jewelry and stretching it as far as it can go while still retaining comfort and utility,” says Quinn.

Courtney Blair talked about how she divides her time between being heard on the radio at KRCL 90.9FM, selling on Etsy, and running her blog Pattern Daily, where she displays her posters, patterns, and hand lettering. Her name might sound familiar, as she also wrote about music for SLUG. Chris Blackburn of Blackburn Studio told us how he became the guy at Craft Lake City behind the giant wooden large format camera offering wet plate prints. “I almost threw out all my stuff multiple times while learning the process,” he says. “It’s cruel, expensive and unforgiving.”

There were too many entertaining and informative presentations to name, though the night was filled with great talks. The next PechaKucha Night likely won’t happen until the start of next year, though their website offers many previous presentations to watch as well as info about the next event. Check it out if you like TED Talks, but feel too many of the speakers wear pleated khaki pants.