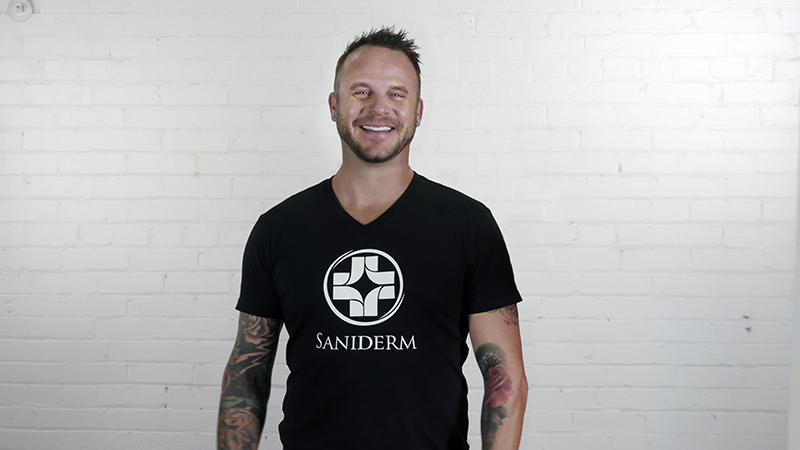 Saniderm Has You Covered

Riding high on a marathon of tattoo convention appearances, Steve Tarr—Director of Sales for Utah-based, medical-grade bandage/tattoo aftercare company Saniderm—gears up for Inked Magazine’s Empire State Tattoo Expo. “[Sandierm has] Arlo DiCristina, who is one of the top artists in the country, tattooing out of our booth with us. It’s way exciting,” he says, noting that during convention season, Saniderm stretches their team across many different locations, both in the U.S. and abroad. “At one point, we were at six different conventions on the same convention weekend.”  For Tarr, the payoff for going to so many conventions isn’t immediate in a monetary sense, but is rewarding in promoting the business and networking with talented artists. Most recently, a convention in Denver, Colorado, required the artists in attendance to use Saniderm as aftercare for tattoos at the convention, which has helped solidify Saniderm’s reputation as a leader in tattoo aftercare. For Tarr, the opportunity to forge relationships with artists as well as giving out samples has been instrumental in spreading the word. “People have heard about us. They’re just starting to make the transition into using us,” he says.

Founded by Scott and Natalie Hughes, Saniderm recently celebrated seven years in business. They have a vision to continue to grow on a worldwide scale, as well as reach out to more in-state artists. “We’re making it a goal to hit more local shops,” says Tarr. “Right now we’re in 70 different countries. We have 150 distributors who are selling for us worldwide. We sell just as much in the medical industry as we do in the tattoo industry,” Tarr notes that Saniderm is also used by hospitals to speed along the healing process for sutures and stitches as well as healing tattoos.

Saniderm also exercises their reputation with artists, giving back 15% of sales to artists who promote Saniderm to their clients. For Tarr, giving artists this opportunity to earn some commission on aftercare that preserves their art and helps their clients, and solidifies the relationships that Saniderm has with artists who use their products, which in turn, helps the growth of the company. “It’s been nice to just watch the growth happen,” he says.

Saniderm, which comes in a variety of sizes and options tailored towards both artists and clients, is becoming a popular form of aftercare: The risk of infection is significantly lower, the maintenance is low and the heal time is “cut in half,” according to Tarr. The bandage—which has two sides, a perforated side and an adhesive side (“It’s like putting on window tint,” he says)—goes on the skin after a tattoo has been initially cleaned and let dry, and can be left on for three to five days, depending on the complexity of the tattoo. Saniderm has a strong yet safe adhesive that keeps out anything that can potentially infect that tattoo, while also protecting clothes and bed sheets from the body pushing out ink and plasma. “The thing about tattoos is that a lot of people forget it’s an open wound. I mean, you’re really doing some work to the body. So to leave it open to the air … It’s just going to cause infection. With Saniderm, you clean the tattoo with soap and water, wipe it down, apply the Saniderm and then you’re good to go,” says Tarr.

Among Tarr’s own tattoos are a black-and-grey portrait of Wonder Woman by Brad Doult and a memorial piece of St. Peter to honor his deceased loved ones by Damien Wickham, are still crisp and vibrant in their presentation, something Tarr attributes to using Saniderm. As someone who is active, Tarr is able to address a range common client concerns by relating his own experience. “You can go about your daily activities, but if you’re going to abuse it—which I do on purpose, like rock climbing or mountain biking—you’re obviously going to sweat a little bit more, so you need to see if it is staying on properly. If not, take it off in the shower, clean it, and put another one on,” he says. The typical Saniderm kit has three sheets in case the user needs to switch out their bandage. The kits also come in different sizes, including a roll for artists to use on their clients, and options for CBD balm and lotion.

Ultimately, Saniderm is working toward being the standard for tattoo aftercare, though Tarr says, “There’s going to be people who say, ‘I’m good doing it the way I’m doing it.’ Good. Do it—we’re not trying to say you have to use Saniderm. Our goal is to have it as an option at every shop.” However, the evidence for the Saniderm’s effectiveness is in the bright popping and crisp lines of tattoos that have healed properly. For more information, and for samples of Saniderm, visit saniderm.com.