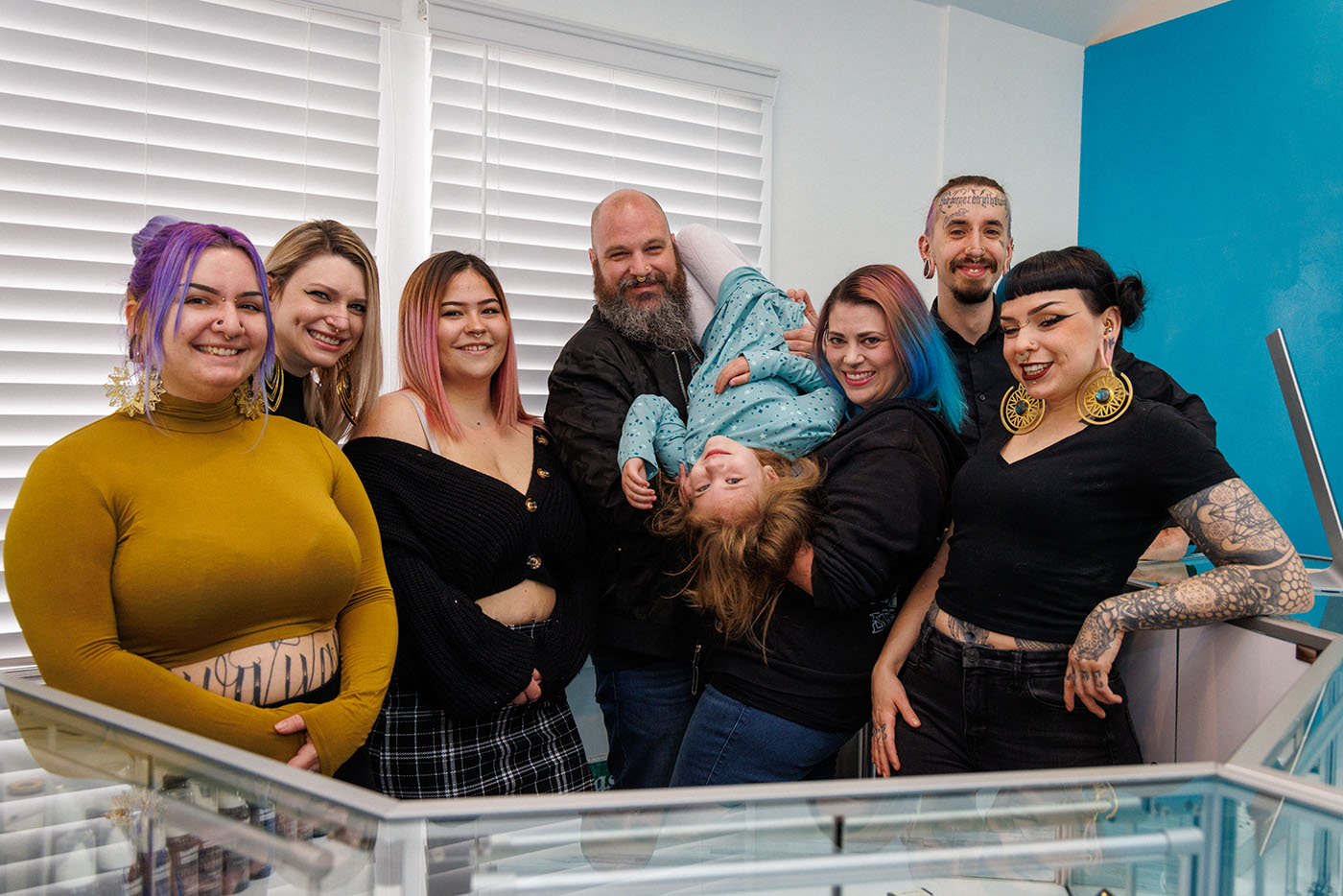 When I quit my first real, adult job at 26, I got my ears pierced at ENSO. I was burnt out on office work and knew it, but the physical experience of burnout is something no one prepares you for: I felt simultaneously tense and lethargic, like I needed to make a fundamental shift but had no connection to my body after molding it into a 9–5 machine. On a lark, I made an appointment and nervously walked into the studio. It wasn’t my first piercing, but it was the first time I felt quite so rudderless. I was making myself vulnerable—I had second thoughts. Then I met Dustin Robbins.

Robbins and his partner, Tara Bueche, own and operate ENSO at 900 S. and 336 East in Salt Lake. While Robbins and several staff focus on piercing and modification, Bueche handles jewelry and administration. Robbins is a calming, soothing presence, the exact demeanor you want from someone who’s about to put a hole in you. Open since 2015, ENSO strives to give every customer an experience that invites the best of what the process of body modification can offer us: controlled, physical release, a sense of reclamation over the body and celebration or marking of an occasion.

“Robbins embodies this ethos of acceptance and inviting calm through the pain.”

“[There’s] the one thing I always remember from my younger years when I’d go into a tattoo shop to talk about piercings,” says Robbins. “They’d be dicks!” Bueche and Robbins met in an era when snobbery over body modding was du jour, when not having any tattoos or piercings marked you as an outsider who still needed to prove yourself as not a poser. “That’s how we met, actually,” says Bueche. “I went to a studio for scarification, and people weren’t being accepting because I didn’t have any tattoos yet. I had basic ear piercings, but that didn’t mean I didn’t know what I wanted next.” Bueche was directed to Robbins but was so frustrated she nearly gave up. After talking on the phone, they met in person. “He was just so calming and made me comfortable. That’s the thing we’ve wanted to keep: Be very inviting, very welcoming no matter what,” she says.

ENSO radiates calm. Their high-quality jewelry is mostly made from titanium gold and niobium—no nickel—to avoid allergic reactions. The studio is bright with natural light and painted in a soothing turquoise, a far cry from the platonic tattoo studio in which piercing’s roots lie. “Piercing and tattooing [had once been] mushed into one—they’re nothing alike. They’re not the same skillset or the same type of art,” says Bueche. To me, in 2022 this distinction feels intuitive, but it’s easy to forget how taboo forcibly lumped these practices together. You’d get a piercing at a tattoo parlor like a side dish for your main course. Who else was gonna pierce you? The intensity was part of the whole sell. Now tattoo artists focus on their artwork and piercers focus on the constellation of placement and jewelry that gives people bodily control.

“I was making myself vulnerable—I had second thoughts. Then I met Dustin Robbins.”

Robbins has been piercing for about 25 years and professionally for 20. This lack of distinction in body modification made it hard to initially break into the practice. After some early, amateur piercings on himself and from friends, Robbins began his journey into the practice from one of the originators of modern body piercing in Los Angeles during a week-long course, which he found through reading crass magazines like “Savage Tattoo” and “Body Play.”

Robbins embodies this ethos of acceptance and inviting calm through the pain. Piercing has given him self-awareness, helping him connect with people in vulnerable positions. “There is still a journey—it’s not like I’m all of a sudden the person I want to be—but each step of the way there is something that I never saw before,” he says.

Visit ensopiercing.com to schedule an appointment and learn more about the art of body modification.