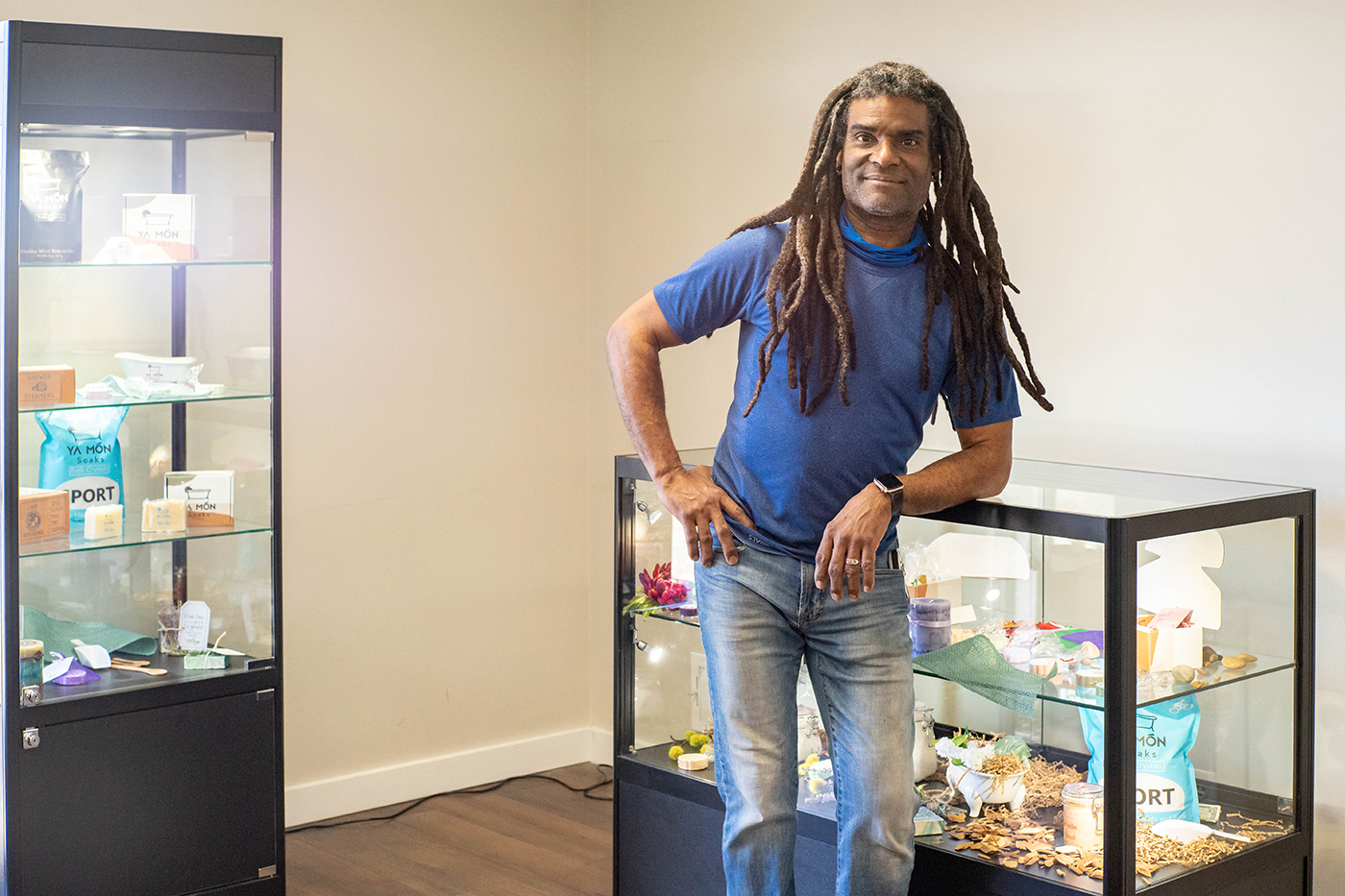 Tinkering With Love: Utah-Made Bath Products From Ya Mon Soaks

John Hewett founded Ya Mon Soaks for one very important reason: “My wife and I dig each other,” he says. “We wanted to start a business together.” Now, the Ogden-based bath products company is up-and-running, selling a full line up of hand-made, all-natural items including bath bombs, body and face scrub, shower steamers and shampoo bars.

“My wife [Brenda] said, ‘Why don’t we sell those bath salts that you soak in all the time?’ and I was like, alright!”

When Ya Mon Soaks began, Hewett had already been making and using his soaps and bath crystals for years. Now, Ya Mon Soaks sells over 20 unique products out of their Ogden storefront and online. Everything that the company sells is made by Ya Mon’s four-person team in Utah.

Hewett and his wife fatefully arrived at the idea of Ya Mon Soaks while Hewett was mid-soak in the tub. “My wife [Brenda] said, ‘Why don’t we sell those bath salts that you soak in all the time?’ and I was like, alright!” The couple was seeking a business plan that would allow them to work together. “We both agree that it is counterproductive to spend more time with your work than with your own spouse,” Hewett says. Within moments of Brenda’s epiphany, the couple knew they had identified the perfect shared project.

In addition to his fondness for soaking, Hewett also had experience with soap-making, which began years earlier as an apprenticeship of sorts. “My late wife [Alexandria] was a soaper, meaning she made soap,” he says. Alexandria would often enlist Hewett to help in the process, a skill set that now serves him well as the owner and tinkerer-in-chief of Ya Mon Soaks.

Hewett, whose personal nickname inspired the name of the company, self-describes his soap-making process as careful, precise and “by the book.” In the “About Us” video on the company’s website, Hewett is shown in his workstation carefully mixing ingredients in test tubes, beakers and measuring cups. As he works, he taps lightly on a container and explains with a smile, “Man, I put love into everything!”

While developing the soap bar that Ya Mon Soaks now sells as part of their product line, Hewett rode the wave of trial and error as he worked to create a product that he himself would want to use. “The first version I made was nice,” he says. “It lathered well, and even though people like[d] it, I thought it was a little drying.” Seeking improvement and balanced moisture, Hewett entered his recipe into something called “the soap calculator” and started gradually altering the ratio. “The problem is, as you take out one ingredient and put in another, you create different problems,” he says. In the end, though, persistent tinkering led Hewett to the ultimate moisturizing recipe. “I finally got what I wanted,” he says. “Our soap bar is creamier, has more lather and leaves my skin feeling wonderful.”

“Man, I put love into everything!”

In constructing his products, Hewett sticks to natural ingredients and is thoroughly convinced that natural bath products are far superior to the kinds of chemical-filled concoctions that people are likely to find in the supermarket aisle. Comparing his shampoo bar to commercial shampoo, Hewett says, “Right off the bat, our bar will stop stripping the hair. Once your hair is used to the bar, you won’t even need a conditioner.” The shampoo bar is made of recognizable ingredients such as coconut oil, olive oil, shea butter and peppermint essential oil. As an experienced soap maker, Hewett’s unwavering endorsement of natural ingredients should leave the rest of us questioning the quality of whatever products we’re currently using in the shower. Wandering the shampoo aisle, we are likely to encounter dubious bottles with names such as “Dark Temptation” and ingredients like “diethanolamine.” Yikes! Meanwhile, Ya Mon Soaks products are handmade “with the highest quality ingredients and packed with Ya Mon’s love.”

For customers checking out Ya Mon Soaks for the first time, Hewett recommends trying his essential oil–packed shower steamers. These puck-shaped products are the shower’s answer to the bath bomb, and, as Hewett says, “They can really liven up your shower time.” Place a shower steamer on the floor or shelf in your shower, and it will give off a powerful and enjoyable steam, creating an in-home aromatherapy spa. “Our Breathe EZ steamer is packed with menthol and will open your sinuses. Each person seems to have their own way of using our steamers,” says Hewett. Soon, Ya Mon Soaks plans to release a new line of shower steamers without essential oils that feature various satisfying aromas.

“Our soap bar is creamier, has more lather and leaves my skin feeling wonderful.”

Ya Mon Soaks products can be purchased at yamonsoaks.com, via Amazon or at their store in Ogden. Currently, the products are made in small batches to ensure freshness. The business can also be found on Instagram @yamonsoaks and Facebook under “Ya Mon Soaks.” Also, keep an eye out for new product releases on the digital and physical shelves—Ya Mon is always tinkering.