00:00 / 16:39
Spotify Stitcher
RSS Feed
Share
Link
Embed
In 2002, while playing lottery tickets, zine maker and skater Rob Collinson's slap-happy pamphlets would unofficially become a mag. Ironically enough, the name for Lowcard came to Collinson while he was scratching away on a lotto ticket titled “High Card.” The object of the ticket was to reveal the highest card and win some cash-ola. However, Collinson confesses that, “I always got low cards on the tickets.” 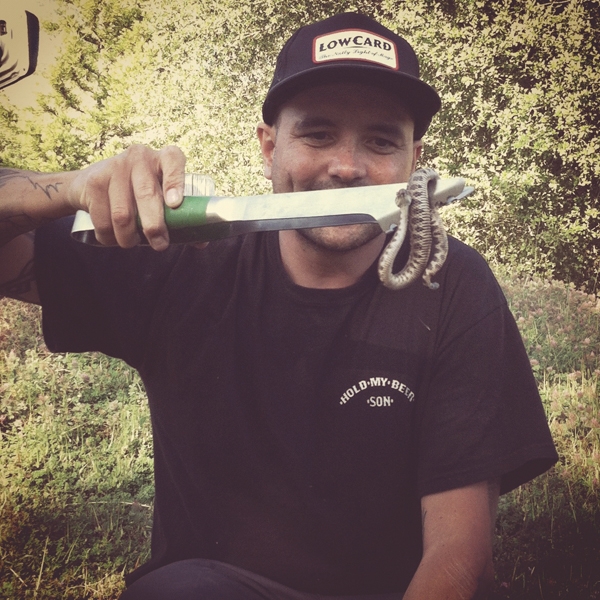 Everything I learned over my early years about San Francisco came from television. Streetcars, sunshine, friendly smiles, large, sloping hills, Full House and Rice-a-Roni—San Fran looked completely different than what I had imagined—then I saw a skateboard magazine. Places like the Pier 7, Hubba Hideout and China Banks graced the pages of every major skate publication.

My desire to move West can be attributed to such images, through the opportunity the landscape provided for those of us looking to pursue a career in skating (or something like it). I never made it all the way to Cali (due in part to Salt Lake’s dynamic landscape), but fortunately, some of the other East Coast dreamers out there did. In particular, Rob “Magnethead” Collinson, who went out to the promised land to make his mark in the skateboard industry.

Collinson was introduced to skateboarding in 1984. Like most skate rats growing up, he spent most of his time kicking around the streets, building shitty ramps and skating as much as possible. “I started skating when I was 11 on a plastic board. I got more into it, asked my Dad for a big board, and it was on from there,” he says. When he wasn’t busy flaking off with his friends, Collinson began to express his artistic side. “I started doing zines in high school. My first one was called Broken Bolts,” he says. These DIY publications were a way for Collinson to share funny stories and “shitty photos” with his buddies, and just laugh about what they did.  With a knack for entertaining, and a ton of support from skaters and friends, these bare-bones pamphlets began to grow. After high school was over, Collinson decided it was time to move away from his small town in Maine and pursue life outside the confines of home. “I moved out West in 1993 with Jay Marsh,” says Collinson, “He [also] helped out a lot with Lowcard.” With a small amount of cash, a skateboard and a few friends, Collinson would eventually land in San Francisco.

The skate history in San Francisco is rich and the scene plentiful. With pros and distribution centers nearby, the area seemed to make sense, especially with the support of up-and-coming skaters. “I had been friends with Dan Drehobl since middle school. I think when I skated Embarcadero back in the day, I was [referred to as] ‘T-dog,’ which means I wasn’t cool,” says Collinson. It was through these outlets that his zines began to build an identity. While working odd jobs to pay the bills, Collinson continued to skate and establish roots in the community with local shops and other business types.

In 2002, while playing lottery tickets, his slap-happy pamphlets would unofficially become a mag. Ironically enough, the name for Lowcard came to Collinson while he was scratching away on a lotto ticket titled “High Card.” The object of the ticket was to reveal the highest card and win some cash-ola. However, Collinson confesses that, “I always got low cards on the tickets.”  Bummer that Collinson didn’t win the big bucks on the scratch-offs, however, a formidable name was established, and his luck was changing for the better.

More people were starting to take notice of the small zine, and asking for the next installment. “People were psyched on the content and style, and in 2005, it really started to take off,” says Collinson. “The first issue I did all by myself. I think it was right around Issue Two that I met my then girlfriend/now-wife, Reija, who began to help with the mag.” Reija began to assist Collinson in the production of the mag, and would eventually become co-owner. Neither of the two had any real experience or formal training in what they were about to delve into. “Reija went to college at Bates College [in Concord, Mass.]. It’s the college that you go to if you can’t get into a real school. I took Judo at City College,” says Collinson. Back then, it was Collinson’s connections, witty banter and the help of his girl and her sister that really brought Lowcard to life. With an extra set of eyes, ears and hands, plus a connection for cost effective printing (thanks to Reija’s sis), the mag began to further produce Collinson’s insight, “crappy photos” and stories about life in the industry.

If you didn’t know, “Printing is really really expensive,” says Collinson. Despite selling his initial issues for a very small fee (a measly buck), the couple was able to slowly gain enough support within the industry to secure some advertising dollars. Collinson says, “Every dollar that we got, we put back into [Lowcard], whether that went towards ink or photographer fees or anything else that would come up.” The magazine has been able to grow exponentially since then by utilizing those advertising dollars to branch out into retail, and also support its small collection of contributors. Now with an online store, fans of the mag are able to purchase hoodies, tees, beer cozies, etc. The photographers, who pitch most of the magazine’s content (even though it might not be seen for a couple months), are now able to afford extra cups of coffee. The fee has also been waived for shops that carry Lowcard’s gear. Due to their growth, the gang has been able to head out on small tours as well. Recently, they teamed up with Blood Wizard and Heavy Wheels, and came out into our neck of the woods, stopping in Salt Lake for a skate/photography tour (see slugmag.com or Issue 44 of Lowcard for the highs and lows).

Now approaching its 10-year anniversary, the mag produces around 8,000 to 10,000 copies bi-monthly and can be found in any core shop across the states or overseas in over four countries. What makes Lowcard different and appealing to most audiences is Collinson’s humor and unwavering dedication to his ideals. Predominantly photo heavy, the publication focuses on the less serious side of skateboarding. Since the beginning, his zines were created to make his friends laugh and share his love of skating with whomever would read them. Today, these are the same characteristics that maintain the foundation for the magazine. While providing an uncensored skater’s perspective without compromising advertising dollars is a hard task to accomplish, Collinson has made it work. Lowcard is able to secure the same companies as the mother-approved magazines typically gracing the shelves and demanding $5, due to their uncompromising attitude. “If someone’s down to help us out and we see eye to eye with the company, then we’re going to let them advertise in the magazine. [Our readers] know it’s not going to change our content just because there is a more corporate company in our mag … because we’re picky with who we let advertise,” says Collinson. “Advertise or don’t. Either way, the mag will get printed.”

Lowcard can be described as skateboarding’s evil stepchild. By using industry contacts and friends at his expense, Collinson and his contributors are constantly challenging mainstream publications with anti-matter. Collinson defines the mag as having “a lot of meaning behind it, staying on the low side.” He says, “I’ve always loved magazines, and I don’t make much money doing it … it’s just for the love of skateboarding.”

You can buy a year’s subscription plus a T-shirt for $20, pick up some merch, or check out exclusive online content at lowcardmag.com.