00:00 / 20:24
Spotify Stitcher
RSS Feed
Share
Link
Embed
With a couple of decades of skateboarding under his belt, Etnies' Cairo Foster is a guy who will indefinitely go down as one of the best and most consistent in the sport. Going from a technical skateboarder to a burly speed hound who will jump down anything, Foster has put in some serious work over the years, and has no intention of slowing down. 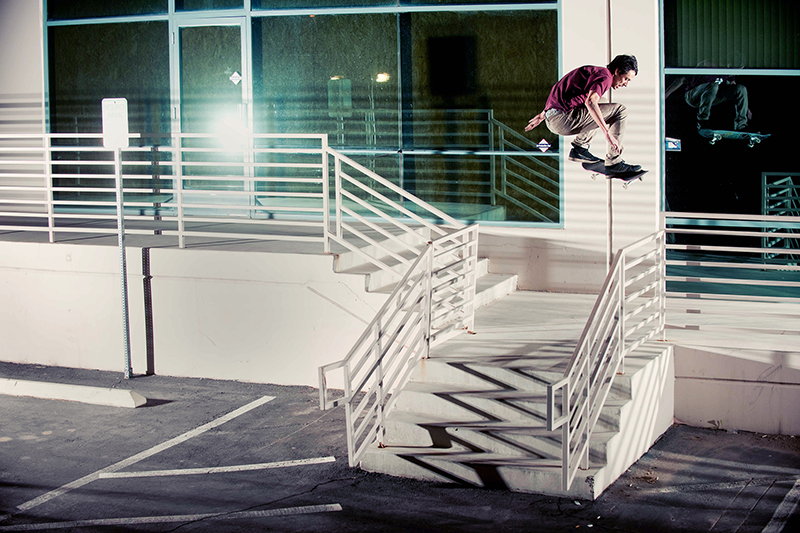 With a couple of decades of skateboarding under his belt, Cairo Foster is a guy who will indefinitely go down as one of the best and most consistent in the sport. Going from a technical skateboarder to a burly speed hound who will jump down anything, Foster has put in some serious work over the years, and has no intention of slowing down. Based out of San Jose and now a pro rider for Etnies, Foster started skating when he was 13 as a means of doing his own thing and, in full rebellious style, getting away from his parents. Landing a part in Thrasher’s Raw video back in ’96 was just the beginning to Foster’s career, which would blow up in more ways than one. He has jumped around the industry, and even had part ownership in Popwar Skateboards from 2004 to 2008. Along with Etnies, Foster has settled down with companies such as Enjoi, Krux, Spitfire, Mob Grip, Diamond and Swiss bearings, and is also a part shareholder of Eswic Clothing. His laidback attitude and inspiring passion for doing what he loves are what ultimately make him so likable.

With a good crew of guys to skate with and consistently great weather, Foster says San Jose has treated him well. “San Jose is a mellow, central spot. It’s not too far from Oakland, Santa Cruz or San Fran, so there’s tons of places to skate and a lot more parks than there were years ago,” he says. “I usually skate with all the Tiltmode dudes like Louie Barletta and Zack Wallin, and all the guys that are still in the Bay area. I’ll go up to San Fran and skate with Keegan Sauder, too.” Before choosing California as a place to call home, Foster spent the winter of ’97/’98 in our very own Salt Lake City, and even tried his hand at some snow sports. “Salt Lake is awesome!” says Foster. “I’ve really been fond of Salt Lake ever since I lived there, and I really like the skate scene there.”
Foster found a lot of inspiration in the Plan B team from “yesteryear,” as he put it. “All the dudes from Questionable, which came out in ’92, I think: Rick Howard, Mike Carroll, Pat Duffy, Kris Markovich and Willy Santos were all killing it back then.” Foster was lucky enough to work with a handful of his childhood heroes in the Spike Jonze epic Fully Flared. The video starts off with an intro of monstrous proportions that involves guys from the team being blown up mid-trick on various obstacles. Foster was chosen to be the guinea pig for the pyrotechnics. “The pyrotechnics guys showed us an explosion before we started skating, so we were like, ‘OK, cool, whatever,’” Foster says. “So I go first and nose grind this hubba for a second, then Rick or Ty [Evans] or Spike hit the button a little too early and blew me up. It was fucking gnarly, way gnarlier than I expected! After that, they just wanted me to 50-50 it. Instead of blowing me up a little bit later, like we had talked about, they hit the button just as quickly, if not earlier. I was like, ‘Shit … I’m going to be the only one who didn’t land my trick. Mike Mo and Alex Olson got theirs first try. [Brandon] Biebel saw it and was like, ‘FUCK THAT!’ It was pretty funny.”
Foster made the switch from Lakai to Etnies back in 2010, with an offer to travel more and be a part of another core, skater-owned company that is 25 years strong. “I’m psyched on it,” says Foster. “Being on a team with Jose Rojo and Tyler Bledsoe is rad. Sheckler is amazing, too—love him or hate him, that dude can deliver on a skateboard. We are really focusing on the product and getting everything right with that, so it’s been good.” As far as the future goes, Foster sees himself being a part of skateboarding for the rest of his life. “I think every skater reaches the point where they realize skating is in their blood,” he says. His appreciation stems not only from being a pro skater, but also from being a part of the industry as a team manager for Krux, and an investor and team rider for Eswic Clothing.  Foster also talked of future videos and some other projects to look out for. “There is talk of putting an Enjoi video together in the future, but I don’t have many details on that yet. My goal for this year is going to be getting a couple trips together with Kenny Reed and try to do some more homies trips. Maybe filming a mash-up video with anyone who is down,” he says. As I concluded my conversation with Foster, he left me with a closing line: “Just keep it fun!”
No better words could have come from a guy like Cairo Foster. He is undoubtedly an incredibly talented skater with the video parts and magazine spreads to show for it. Do yourself a favor and check out one of the many Cairo Foster parts that are out there. From Thrasher’s Raw to Fully Flared, Foster has delivered for years, and it is apparent that he is still having the time of his life. Follow him on Twitter @cairofoster.
Photos: