Fritz Kollman is a sensitive creature. Not the type of sensitivity that happens when you rip a Band-Aid off a wound, or the kind that happens when you can’t take a joke. What I’m talking about is the sensitivity that controls the interaction between a person and their surroundings­. What sets Fritz apart is his levelheaded approach to his circumstance, which has given way to the cultivation of two passions that keep him sane: skateboarding and horticulture. 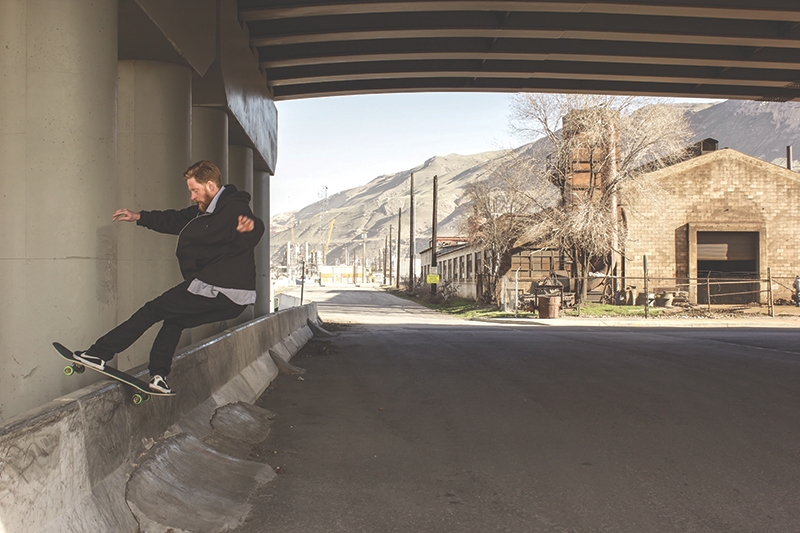 Fritz Kollman is a sensitive creature. Not the type of sensitivity that happens when you rip a Band-Aid off a wound, or the kind that happens when you can’t take a joke. What I’m talking about is the sensitivity that controls the interaction between a person and their surroundings­—the kind that cultivates deliberate awareness about who and what you are in space and time, and how you can make a difference in the universe. This is Kollman’s modus operandi: He’s a sensitive being who approaches life with sincere interaction. When he shares his story, it’s not all pleasure, but it’s not all pain, either. It’s a genuine tale of human versus environment with success, defeat, plants and some skating in between. What sets Fritz apart is his levelheaded approach to his circumstance, which has given way to the cultivation of two passions that keep him sane: skateboarding and horticulture.

I walk into Fritz’s house, pleasantly surprised to find the most miraculous cacti I’ve ever seen. We’re talking giant potted plants sitting in the corner of his living room with multiple, long arms that reach like they’re about to come alive and grab you. “I love your cactus plants,” I say. Fritz corrects me, saying, “They’re Agave. I got these from Red Butte. When they get too big, they pawn these off to the employees. Aren’t they beautiful?”
Fritz is a horticulturalist at Red Butte Gardens, which I mistake for botany. “No, I don’t categorize plants—I garden,” Fritz says, and begins explaining his love affair with the species. His eyes light up and his hands start moving as he talks about what he does as one of the master gardeners at Red Butte, leading a small team of minions to help.
Fritz admits getting into horticulture through his girlfriend’s mom. “Honestly, I was aimless and floating in life until I started learning about this other universe that exists beneath us. I am blown away at how a simple plant can nourish and heal you. They’re everywhere, too, right in front of us­—growing alongside quiet roads, in backyard gardens and in the middle of cities. I’m amazed how something so small can offer us so much,” he says. Our interview might have been initiated because of his skateboarding talents, but he gives so much value to the landscape that surrounds us, I can’t help but nurture the topic.
We talk more about how Fritz integrates his plant world into his human world. From where we are talking, I can see through his double glass doors to a couple of backyard garden boxes outside, littered with dried shrubs. The scenery looks pretty bleak from my perspective.  I shift my gaze to Fritz’s inner surroundings and stop on a stack of strategically piled rustic skateboards that sit atop his bookshelf, posing like art. Based on his authentic home decorating, I can tell what motivates him in life. There are decks hanging on his walls exposing artistic graphics, framed vintage prints and an ample vinyl collection. Regardless of the active surrounding décor, Fritz’s space is calm. He seems to catch on to my wonder, and from there, we start talking skateboarding.
Fritz began skating at 13. He said growing up at boarding school in rural Colorado gave him a different perspective than what was typically portrayed in common city skate scenes. “I was raised in Wisconsin and sent to boarding school. My dad had died, and I needed something to be stoked on,” he says. “I liked the feeling and freedom of movement it gave me.” Also, he’s an OG. When he took to skating in 1989, the game had reached a decent peak of mass culture popularity, but didn’t quite capture the corporate inertia to keep it alive through the ’90s. “I didn’t even notice that skating had died,” he says. “As far as I knew, skating had always been the same. From when I started as an early teen up to my 20s, I just kept skating. It’s what I did. It wasn’t until I came back to Utah in 2003 after graduating college in Wisconsin that I noticed skate parks everywhere. It was then I understood the change skating had gone through for almost a decade.”