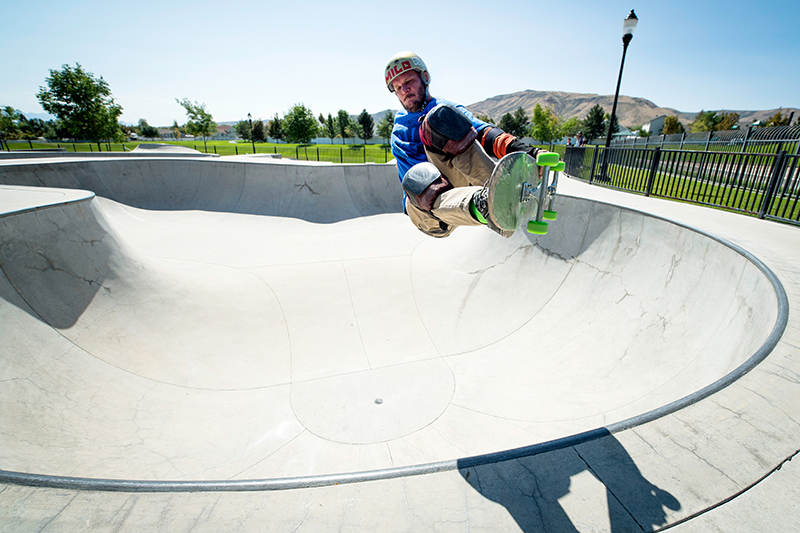 Jed Fuller: A Will and A Way

Let’s get something straight right off the bat: Jed Fuller got his start on four wheels back in the days we curb-slapping, non-complying bros can only pay homage to. He saw the early days when street skating, as we know it, came to be. Take it from Fuller himself—“If you could ollie, you could go to any contest and pretty much win,” he says, recalling getting into skating. “That was starting to become the big thing.” Well, after spending his life on the board and getting a push from a friend, Fuller has started to make a name for himself. While he yearns for the top spot in major bowl contests around the country, he really seeks to give hope to fellow skateboarders and show them that anything in life can be overcome. He’s got the skills to do so, too: He stays on beat with the street scene, and he’ll crail slide the deep end of a pool like he owns it. Whether he makes it or not, though, he’s enjoying every damn minute of it. “I’ve been skating for 30 years, and I’d do it for another 30 years without making a dime … It’s just the passion,” Fuller says.

As Fuller mentions, 30 years ago, he first laid eyes on a homie’s board and knew that he had to give it a go. “My brother had a friend who skated, and he had a legit G&S board,” Fuller says. “I saw him doing power-slides—I saw the freedom in what he was doing. That was midsummer. I was 12. My mom got me a board for Christmas and that was it, man.” By the time high school rolled around, Fuller was fully committed. “Skateboarding was my heroin,” he says. “I just loved being on my board.” He drew inspiration from his love for the board, but was heavily influenced by the Bones Brigade—he says, “One particular influential thing was The Search for Animal Chin. Those guys were having so much fun.” With the mix of street and transition among the Bones Brigade, Fuller enjoyed each side of the spectrum, recalling early days with his friends. “We’d go to my buddy’s, go skate a ditch and walk to the mall to skate the curbs,” he says. Follow that up with a few drop-ins at the skate park, and you’ve got yourself and all-terrain vehicle. Don’t take my word on this whole ATV business. Check out some footage on YouTube. All you need is his name and 15 minutes of spare time to see Fuller tear SoJo Park a new one and even shred in something you might know as the Vans Pool Party—invite only! Take note of his style, too. He’s got old-school thrash going. “It’s passionate aggressive,” as Fuller will tell you. “I’ve had a few of the pros tell me my style was really raw, old school, like RAWRR!” You’ll agree. There’s no lax attitude with this guy—he goes for it!

Fuller isn’t messing around—he’s given skating his all, and now he has his sights on something more: a career. Seven years ago, Fuller found himself a bit lost. After battling depression for years and going in and out of the hospital, he decided to look into some self-help. Fuller says, “I listened to this tape that said, ‘If you want to be happy, figure out when you were happy in your life and what you were doing.’ I was like, ‘Oh, skateboarding!’ and I just started doing it more and more.” Around the same time, a friend took note of his skill and pushed Fuller to get sponsored. Fuller took his advice and marched into Salty Peaks with a mission. “I went in [to] Salty’s and asked what the team was about. ‘What’s it take to get on the team?’ [He] was like, ‘We know who you are, dude. This board’s free.’” It was that easy for Fuller, so he saddled up and decided to shoot for the stars (which he did). Eventually, he made the switch from Salty Peaks to Milosport Orem, and now Fuller’s getting hooked up by Green Issue Skateboards, Bones Wheels, Ace Trucks, Cassette sunglasses and Mynt Energy. Though the free goods and covered contest fees are great, Fuller sees something more in his big-league goal. “My kids are in Boston,” he says, “so I was like, ‘Hey, if I can travel around to these contests, I can get some frequent-flyer miles and see my kids.’”

With the love from his sponsors and some serious drive, Fuller has fully stepped into the competitive world. “I go to the Vans Pool Party every year. Last year, I took eighth; this year, I took sixth in the Masters.” Placing at the Pool Party is quite an accomplishment, but that’s not the only notch in his belt. He’s been all over the country, showing judges that he’s got what it takes to hang with the likes of Christian Hosoi, Bucky Lasek and Steve Caballero, to name a few. “Over the years, we’ve become friends—I’ve got Caballero’s number,” says Fuller. “When I go to California, I can send him or Bucky a text and say, ‘Let’s go skate!’” Do you have Steve Cab’s number? I didn’t think so.

Looking back at it all and still doing the damn thing, Fuller is just doing what he loves. He’s thankful for it all. “It’s taken me from nothing to where I am now—getting invited to events, getting free product and traveling around the nation,” he says. “More importantly, it’s introduced me to people. It’s made heroes become peers.” Fuller doesn’t just voice his love for skateboarding either—he puts it into action. He’s giving back to skateboarding what it’s given him: “I’m working on a nonprofit called Skate to Live,” he says. “It’s going to help kids and their parents pay for counseling or medicine for kids with depression. Skateboarding got me out of mine, and I’m hoping to restore that passion back into people.” This dude’s got roots and heart—much respect. Fuller gives all his thanks to those who surround: “Thanks to all of my sponsors, my kids Mads and Abbie, and to all my friends and family for the love and support.” There you have it, kids, a true soul skater. I hope you took notes.