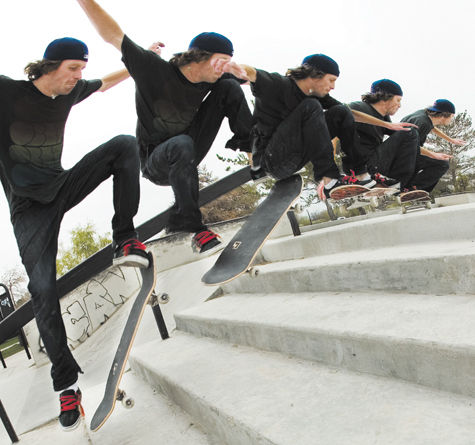 This month’s etiquette is about watching your language at the parks. It’s not like people don’t already look down on skaters enough already.

Wow. I can’t believe some of the crude and vile language I’ve heard over the past month at pretty much all the skate parks around the valley. Didn’t your parents teach you any manners as a child? You guessed it: this month’s etiquette is about watching your language at the parks. It’s not like people don’t already look down on skaters enough already without having to hear some kid throwing f-bombs left and right. The other day I was at a local park and I hear some freak yelling at the top of his lungs how he’s going to f#@king kill somebody if they don’t start f#@king paying attention and stay the f#@k out of his way. I couldn’t believe the gall this dude had. I literally saw him drive a little girl to tears and send her packing to her mother, who was waiting for her in the parking lot with a cooler full of orange drinks and bagel snacks. All swear/cuss words are off limits at the park. I think they even post this rule on some of the skate park signs. So if you happen to roll your ankle or break your leg, don’t use profanities to express your pain and discomfort. Try using alternatives to swearing, like giving a complete stranger a hug, or after focusing some kid’s board, giving him your brand new one (trucks and everything). Even try breathing techniques or taking a nap.

What could be worse than swearing at the park? Well, let me tell you: it’s taking the Lord’s name in vain. I mean really do you want to be vain? Where on Earth are you going to fit in with others if you’re vain? Remember the Lord’s name can only be used in vain when supporting wars or when you become a born-again, right after you get sentenced to twenty years in prison for killing babies. The last thing I want to hear at the park while I’m shredding is some crazy guy yelling “Jesus f#@king Christ,” or “f#@ck you God.” When I was a kid you would get your mouth washed out with soap if you cussed (that’s swearing for those of you not over the age of 24 or not from the South) in the presence of an adult or some tattle-telling brat. When you’re at the park you should use rational thinking and never give in to the temptations of Satan. Next time you go to swear or use the Lord’s name in vain just think about frying in Hell for all of eternity.

If you didn’t know by now, this is a joke. The first amendment also applies at skate parks, so if you can’t stand the heat, get out of the kitchen. Try using sentences at the park where the nouns, adjectives and verbs are all swear words, this is way fun and it relieves stress. Oh and to that little girl I sent home crying, you are going to grow up to be the next Betty Crocker if your stupid ass is lucky. You aren’t ever going to be Alissa Steamer because, damn, that bitch has one hell of a potty mouth.