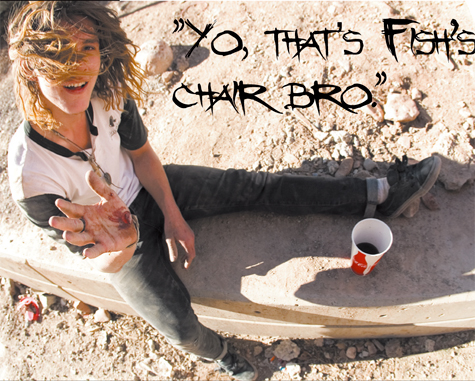 This April has been crazy. I’ve seen more snow in the last month than I did in all of January. Thus, skating was cut down to almost nothing. Deadline week rolled in on me and I had nothing but a couple random photos. I needed to make something happen fast. One of the first rippers I thought of was Brooks Scott Hall. He’s always up to some crazy-ass antics and always down to skate. The kid is a wild fucking hellion. He told me once about a night when he and some friends broke into another friend’s house to party ‘cause they didn’t have anywhere else to go. Before leaving, they moved everything around just to mess with him even more.

It was Sunday morning when I called Brooks. He was naked in the back seat of his car, just waking up. I told him we needed to get enough photos for a story in one day and he was all for it.  Within an hour we were already skating. Three spots, two broken boards, a shredded palm and a bruised knee later, we had enough goods to make a story. A couple nights later, I teamed up with Dirk Hogan to turn over some embarrassment and dig up some dirt on Brooks. The following is what came of our excavation into the world of Brooks Hall.

SLUG: Let’s just get started with your name and timeline.
Brooks: Skull Breath or Ape Shit. You could call me Sunny Brooks. I was born in San Diego. Moved to Arizona from there. Then I bounced between Chicago and Salt Lake for a while. I think I’m going down to Miami soon.

SLUG: Out of all those places, which has the most beautiful women?
Brooks: I don’t know. There are a lot of chicks in downtown Chicago.

SLUG: Where were you when I called you Sunday morning to go skate?
Brooks: I was up at Snowbasin after this huge kegger where the Naked Eyes played. I was passed out naked in the back seat of my car with a 36C bra but no girl—she just left it.

SLUG: Alright, King Diamond and Michael Jordan are playing b-ball one on one. Who do you root for?
Brooks: Jordan has a wicked jump shot, but I’m pretty sure King Diamond would dunk over him because Satan powers him. You don’t see King Diamond in any Hanes commercials.

SLUG: Speaking of Hanes, when is the last time you wore underwear?
Brooks: I’d say three years ago maybe.

SLUG: King Diamond obviously greatly influences you. Let’s talk about Slayer.
Brooks: Fuck yeah, Slayer. That’s my puppy. I was just driving around Bountiful one day with my buddy Collin when I saw this dog roaming around and animal control closing in on him. I yelled out, “Fucking pull over the car.” Got out and jumped in between that fool and the dog. Yelling, “Get the fuck away from my dog!”  “Is that your dog?” he said. “Yeah, come here Snickers… I mean Slayer, get over here!” Of course he didn’t come so I ran over and grabbed him. This guy’s a huge Alaskan Huskie, taller than me spread out. Guaranteed a pretty nice family owned him, cause he had clipped fingernails and was all groomed but he didn’t have any tags or anything, so whatever. He’s loved at my house. Slayer’s fucking rad.

SLUG: Prophylactics.
Brooks: What the fuck is that?

SLUG: Bret Michaels.
Brooks: Sucks … but gets lots of chicks.

SLUG: Moving on, let’s talk about the gang you started.
Brooks: Young Guns. I got a tat for it on my chest from this guy who was two days out of prison. We were at this party getting way drunk and I offered him two hits of acid to tat up my homies and me. So he called up his girl with a tattoo gun and that was that. It’s been straight hell after that. Some of the Young Guns killin’ it are Dirk Hogan, Chase Mathews, Tate Dunham, Matty Coles, Taylor Balk, Duck Fang, Collin Batwiler, Keaton McDonald, Omar Budge and Cam Starke. The initiation is rugged. If you’re not a believer in G.G. Allin and his ways, don’t even fucking try, cause that shit gets fucking crazy. Expect to wake up with a crusted-ass mucus face, cause we’ll drink our asses off and spit in your face or puke on you. SLUG: What is the craziest thing you’ve ever puked up?
Brooks: Definitely a cigarette butt. I was down in Sacramento locked in a bathroom drinking a couple 30s with Goo Brain and Audi when I drank a beer with a butt in it then threw it up later. I don’t remember drinking it, but I definitely remember throwing it up.

SLUG: Do you remember the time you came over to Tabisas’ house around four in the morning completely out of it and went right to the couch and passed out? Then like 30 minutes later, you stood up pulled your pants down, and started pissing on Chase’s feet while he was sleeping on the floor next to you? Then you kicked off your pants, peed a little on them, and went back to bed pants-less?
Brooks: Ha ha. I guess that was the second time I pissed on Chase. The first time was at my pop’s old place in Holladay. He must have been out of town or something cause it was just me, Chase and this girl drinking a 30. I pretty much drank the entire thing and passed out. They went to sleep on the floor right next to my bed. When I woke up in the middle of the night, I rolled over and started peeing on both of them. Didn’t even stand up, just rolled over cause they were on the ground anyways. Then they went to sleep in my dad’s bed and my dad walked in on them in the morning while they were completely naked.

SLUG: Is there anything you want to tell the Sugarhouse Taco Bell Franchise?
Brooks: I don’t know if I should open that box—could be incriminating. We’ll leave that one off the record. It was sick though. That job ruled—getting drunk 24/7.

SLUG: Didn’t you sleep with the manager?
Brooks: Like I said, off the record.

SLUG: Tell me about your 24 hours in jail.
Brooks: Too many alcohol tickets. My cubby number for all my stuff was 666, that was way cool. I went in there with sixteen cents and three dice. I took a bunch of sleeping pills so I wouldn’t have to deal with shit and just slept half the time. They gave me pencil and paper and I wrote all these little letters. Quoted some Alice Cooper and wrote about my shitty cellmate that kept telling me how his bitch of a girlfriend kept yelling at him and that’s why he hit her. When I went down for lunch, I sat next to the gangliest dude there. He’s like, “Yo, that’s Fish’s chair bro.” I just walked away. That shit was hilarious.

SLUG: Want to kick down some sponsor love real quick?
Brooks: Oh fuck yeah: Blindside, Red Bees Hardware, Gizzmop Socks, and a Death Wish board from a session of carcass hucking with Lizard.

SLUG: Alright, last question, your house is on fire and you have one second to make it to the door. What do you grab?
Brooks: My skate, my Terminator 2 vinyl signed by Guns and Roses and Slayer, even though he could probably run out anyway.