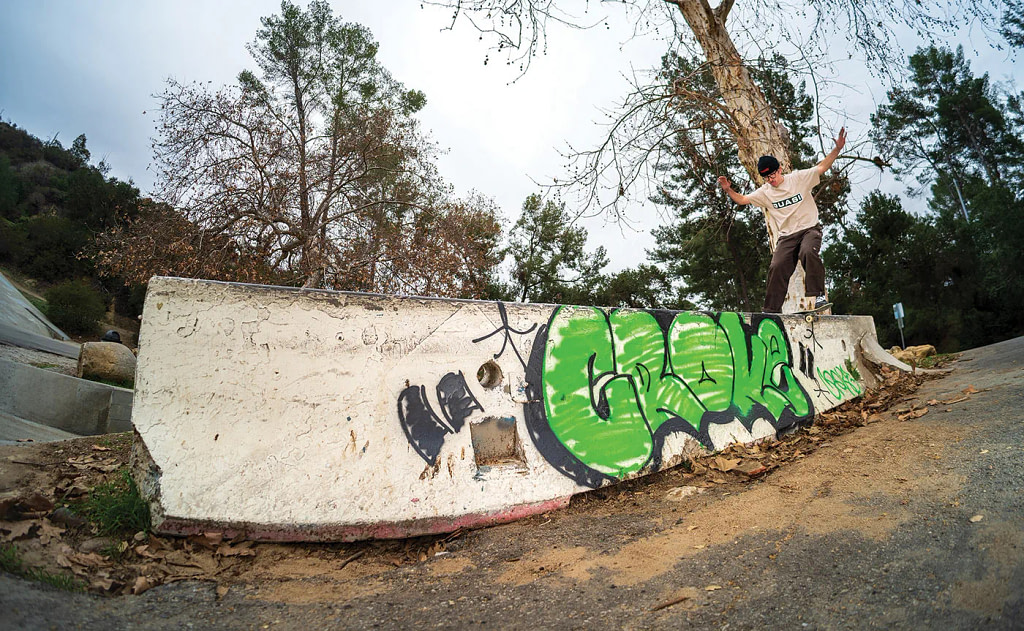 Take Me Back to Los Angeles: SLC Skating the West Coast

The idea of going to Los Angeles for a few days had been talked about since Salt Lake’s first snowfall. Britton Larsen texted me in early January and asked if I wanted to head to Los Angeles with him, Cal Ross and Scott Rutherford. I immediately said yes and three weeks later on a Friday at 5 a.m. we were off. We stopped in Las Vegas and Baker, California to skate abandoned pools and stretch our legs before returning to the car to complete the ten hour drive.

We pulled into Los Angeles around 5:30 p.m. and skated a little before turning in. Saturday the crew was up early and ready to skate. Our first spot was at Griffith Park. Britton wanted to skate a gnarly barrier with a sketchy run up. Within a few tries he landed a stylish backside boardslide. We wrapped up at Griffith Park by noon and were off to a secret spot we got invited to skate. We drove up into the hills of Burbank to a mansion with one of the biggest backyard pools I have ever seen. While the boys got busy shredding I pulled out my camera and enjoyed the view of Britton getting a huge 5-0 in the deep end of the pool.

Our second day wrapped up and we sat down for a big meal before bed. Sunday morning we headed to Downtown LA, stopping at multiple spots as we pushed around the city. We found a spot with a double ledge: one high, one low. Everyone who knows Cal, knows he is a wizard on his board. Within minutes Cal pulled off a backside noseslide to backside tail slide to pop-shuvit out. As our trip came to a close, Monday morning came fast and we packed up to leave.

On our way back to Salt Lake City, we made one last skate stop to check out an abandoned metal work yard in the middle of nowhere. We found a half of a metal tube fitting in the perfect position to be skated like a half-pipe. Scotty eyed it up and went for a rock to fakie, he crushed it with style and we were on our way. No amount of video or pictures can explain the great feeling of having nothing to do but go out and skateboard with friends. Memories like these are part of what makes skateboarding special.