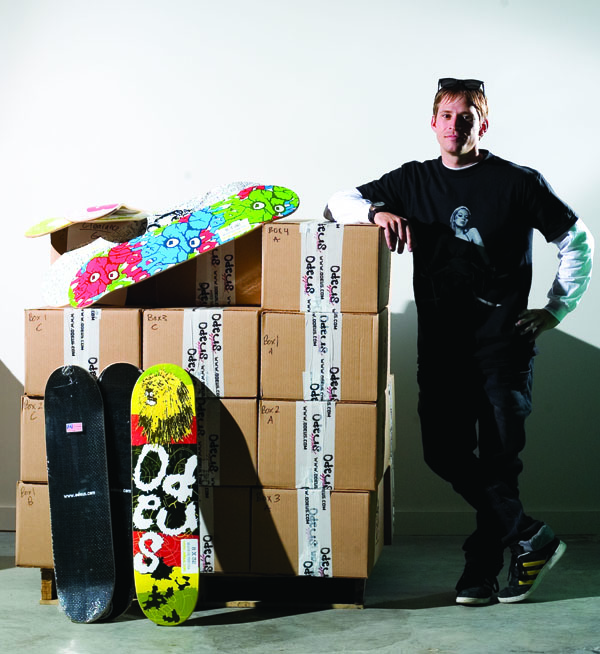 The Blue Collar of Odeus Skateboards

On the come-up since 2006, Odeus is a local skateboard company created by brothers Alex and Mitch Lemons. The concept for Odeus started with Alex skating in the mid 80s when the only board options were a plastic banana board or a Powell Peralta.  The banana boards were poor quality and the Peralta was expensive. “There was no in-between option,” says Alex, “I was going to be the guy that made that third option.” Time wilted on and the inspiration to create a skateboard company soon took a back seat to life. Alex had a short career as a professional skier, graduated from Westminster as an English and History major and then enlisted into the Marines where he would serve three tours in Iraq until 2006. At this time his brother Mitch was tumbling down a dark path, walking away from two years at Westminster as an art major and moving to San Bernardino, California where he got caught up in some trouble with the law, ­serving 45 days in county on a weapons charge. Alex, knowing his brother’s brilliant skills as an artist, wanted to help keep him out of trouble and decided it was time to kick start an old dream into reality. Ten days after Mitch was released from county, the two of them formed an LLC and Odeus was born with Mitch as the head of art and design and Alex as the head of marketing and sales.

They started by working out of their garage, creating everything by hand. Because they had friends involved in the production of skis, snowboards and surfboards, the Lemon brothers were able to borrow equipment to press their own wood and basically shape the boards by hand. “The product was so shitty,” Alex remembered, “it wasn’t going to work.” They needed to find a board manufacturer and a warehouse to run their business from. Alex didn’t want to settle with just any deck manufacturer and he didn’t want to contribute his money to a foreign country. “We’re an American company, I believe skateboards should be made in America.” He had been to factories in Hong Kong, Singapore and Korea, knew of the horrible working conditions, shoddy wood and terrible child labor laws. So, in December of 2006 without a single connection in the industry Mitch and Alex made a call to Watson Laminates­, producers of Toy Machine and Foundation boards.

Upon that first phone call Alex recalls pretty much getting laughed at when he told them they were a skate company out of Salt Lake City and wanted to get boards produced at Watson. All they wanted was to talk with the manager and owner of Watson, so they packed up and headed to California. The first person they got to sit down with and talk to was none other than Todd Swank president and owner of Tum Yeto. They told Swank about how they wanted to start their own skateboard company and gave him the short history of Odeus. “He didn’t laugh in our face,” says Alex. Swank said Alex and Mitch reminded him of himself at a younger age when he wanted to start up his own company and asked Steve Rocco (World Industries) for help. Knowing what was ahead of them (if they wanted to succeed) Swank set them up with a max order of 300 boards to sell in a period of six months. The transition from little garage shop to skateboard company was finally starting to take shape.

Right from the beginning Alex knew it was going to be almost impossible to take on the big skate board companies of America. Alex says, “To make this happen there is no way in hell we can just open up in the United States. We need to go outside the country with American goods and an American product to build a base there and make some profit.”

They set up a plan of action and started building a following in Germany, becoming that third option providing a high quality product for an affordable price. The Odeus name really started taking off as they got a killer photographer, Flo Hopfensperger, to shoot their riders like Michael Heindl out in Germany and started bringing the kids back to the states to get footy and photos. It was hard work but things were progressing. “We had to hurt ourselves physically, mentally, emotionally and financially for the first two years before anyone had any respect for us,” says Alex. Then in August 2008, when the American economy took a plunge, Alex sees an opportunity present itself for him to bring Odeus back to the United States. So they took to the streets, hitting the ground hardcore with guerilla style advertising techniques: driving around to skateparks every Saturday, sponsoring contests, literally bringing their product to the skateboarders, showing them first hand what they had to offer. It was a major breakthrough for Odeus to start building a following in the states. Boards were flying off the shelves of some local SLC city shops like Lenitech and Technique. They were reaching out into areas of L.A and New Mexico adding some more rippers to the team roster like Jake Johnson, Rj Johnson and Erin Lopez.

However, another complication was still holding Odeus back from supreme success: that frozen, wet and dreadful season of winter. “Just from a financial perspective it’s kind of absurd to try and be a skateboard company from Utah and just sell to Idaho, Colorado and Wyoming because you only get six months out of the year,” says Alex. Losing sales trying to ride out the cold winter months is very difficult and could very well become the guillotine to sever the Odeus head, which is why Alex and Mitch have made the decision to chase after an endless summer and move their home base to California where skateboarding goes on 365 days a year. Granted, you’ll need the funds to make it out there but the options once there are almost endless—Not to mention the reverence that will be gained by the industry when Odeus represents as being based out of California rather than Utah.

It’s an unfortunate political truth that a skateboard company trying to come up out of SLC Utah doesn’t get taken seriously. Whether we like it or not, skateboarding was born in California and because of that California will always set the industry standards. However, you can rest assured that Odeus won’t let Hollywood fry their brain. “We’re the company of the inner city and the working class kids that can’t afford to get an eighty dollar skateboard,” says Alex. They are a company that understands skateboarding is a culture, not a sport. The culture is that image of hanging out in the parking lot playing a game of skate and going to the shop for a new deck, not passing out flutes of champagne and flossy watches at ASR. With the mindset of a Trojan horse Odeus is off to infiltrate the overzealous corporate skate monsters of the industry and even out the market shares to give something back to the community.