You usually don’t hear of many well-known skaters coming out of the Netherlands, but with his skating talent, it was hard for Dely Bosch to go unnoticed. With his effortless and clean style of skating, he isn’t afraid of throwing himself down a set of stairs or hit a big rail. 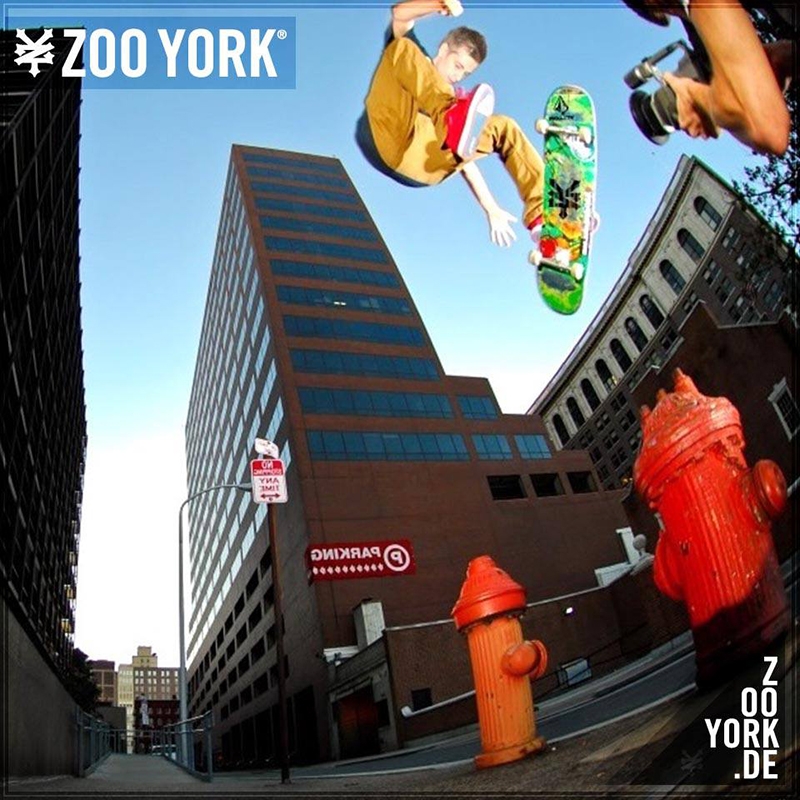 Dely Bosch was born March 7, 1990 in the great city of Amsterdam. You usually don’t hear of many well-known skaters coming out of the Netherlands, but with his skating talent, it was hard for Bosch to go unnoticed. With his effortless and clean style of skating, he isn’t afraid of throwing himself down a set of stairs or hit a big rail. As lots of skate companies expand overseas and start Euro teams, Bosch caught the eye of Zoo York and was put on the team as an amateur. Since then, he has kept killing it with his skating and gained more sponsors and coverage in the skateboard world.

SLUG: How long have you been skating? What got you into it?
Bosch: I have been skating now for about nine years. In my neighborhood there was a small skatepark and there were always older boys skating. When I saw them skating, I thought to myself, “That’s also what I want,” so my mother bought a skateboard for me and I started practicing.

SLUG: Did it start as just another hobby or did you plan on doing it as a career?
Bosch: No, it started as a hobby at first. I skate a lot with friends and one took part in a lot of competitions, so I also decided to start competing. After a couple, I got noticed by some companies and that brought me sponsors. So now, with the way things are going, it is a lot more serious than just a hobby.

SLUG: Do you have any favorite skaters that continue to influence your skating?
Bosch: I think Rob Dyrdek is a very good skater. After I saw his program, Rob & Big, I found out that he just does what he likes. He just makes everything fun and that is the most important thing! Ryan Sheckler is a bit of a role model for me. He has achieved a lot in his life and he is also a very good skater. I like his style.

SLUG: Have you been filming footage for any upcoming parts?
Bosch: People who work for True Skateboard Magazine are going to make a video of skaters who come from different places in Europe. They asked me to participate in this video and I feel honored. I’ve heard of many other known skaters that will also participate in this video. They will start filming very soon.

SLUG: Have you ever had any serious injuries from skating?
Bosch: Not really, just a broken collarbone and a broken wrist, with the obvious further abrasions and bruises.

SLUG: What is the skate scene like in Amsterdam? Is the weather nice all year around?
Bosch: The weather actually sucks! Occasionally we will get some decent weather, but most of the time it will suck. The skate scene is good, we have a nice park called the Skatepark of Amsterdam, and there are some pretty good skate spots here, too. The Netherlands is not big so you can easily go to skate spots and parks in other places.

SLUG: Have you ever been to the U.S.?
Bosch: I’ve been to several places in the U.S. I went to San Diego on a skate trip. I’ve skated at the Kona Skatepark in Jacksonville, Stoner Plaza in Florida, and the Skatepark of Tampa. I even got a chance to skate at The Berrics and in Camp Woodward.

SLUG: How do you like skating for Zoo York? How did you get hooked up with them?
Bosch: I have a friend that rides BMX and was sponsored by Zoo York. One day I went with him to ride on a BMX spot that actually was also a good skate spot. It did not take long before I swapped the bike for my board and started skating. A guy from Zoo York came along and liked what he saw. That same evening my friend told me to call Zoo York because they wanted to sponsor me.

SLUG: WhO are your other sponsors?
Bosch: I’ve had many different sponsors over the past years, but at this moment, my sponsors are Zoo York, Wesc, Etnies (flow), Volcom (flow).

SLUG: What do you do when you aren’t skating? Has skating influenced any of your other hobbies?
Bosch: Besides skateboarding, I go to school five days a week. School influences my hobbies a lot! Because of it, I have less time to skate, though. I also practice martial arts.

SLUG: What has skating done for you in your life? Why do you stick with it?
Bosch: Thanks to skating, I have sponsors and I get lots of stuff, and I’ve won prizes and money by skating. But the most important thing for me is that I feel fine when I skate, it makes me happy!

SLUG: Where do you hope your skating career will be in five years? Ten years?
Bosch: First, I wanted to be famous by winning a lot competitions, and my purpose was always to turn pro. But now I just hope to get a lot of fun in the upcoming years. I think winning and being famous are no longer as important. If I start winning competitions, it will be a bonus! And if I ever become a pro skater, it would be a super bonus! I just want to have a lot of fun, especially with skating.

It is nice to know that there are still skaters out there who do this great sport simply because they love it. The awesome feeling of cruising down a sidewalk or bombing a big hill is all that Bosch needs. Don’t think that means that he takes it easy though, when it’s time for business, Bosch will lay down everything he has. With a First Place finish in one of the Element Make It Count contests and also placing Third in the DC Agents of Change contest under his belt, Bosch is well on his way to establishing himself in the skateboarding world. His career is doing nothing but continuing onwards and upwards especially, with his part that will come out in the new True Skateboard Magazine video. Keep an eye for this kid.