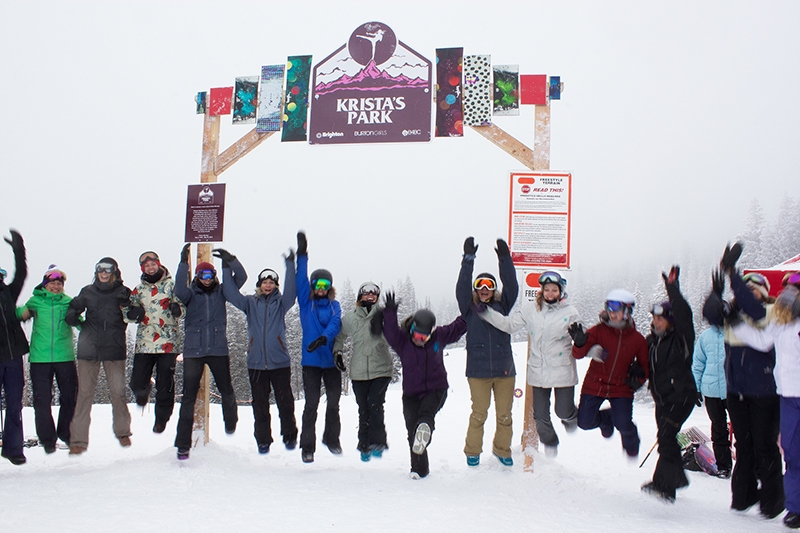 Naturally, I arrived at the event early to prepare myself for the opening and grab some interviews from those who were closely acquainted with Krista. After a short while, the impact she had on her surroundings during her life became evident. Not only was I hearing how amazing and talented she was from her friends directly, but I also caught conversations between others about her beauty, camaraderie and athleticism. As I kept talking with people about Krista and learning about her positivity, unique personality and giving nature, I felt humbled. I believe a lot of “tomboyish” females feel like me: So often, in our years of sports, we end up “playing with the boys” because finding a female friend whom you can compete with, joke with and have fun with enough to actually call a friend (sans jealousy) is hard to come by. To be honest, getting to know Krista vicariously through the stories I was hearing made me wish I had a role model like that in my life—a good friend to share in the journey of the sometimes-uncomfortable territory of male-dominated sports. During her life, Krista was that role model for fellow females as well as males. “She was such a good friend and leader. She showed me the ropes of the industry,” said Josh Fisher, owner of Four Horsemen Sales, the distributing company for Burton and predecessor of Krista’s SLCK sales agency. Inspiration and love for life set Krista apart from others. She didn’t seem to be arrogant about her talents and popularity in the outdoor recreation scene. She just seemed to be a very kind person, which is why she was so well liked. “I never heard her say a bad word about anyone,” said Krista’s snowboarding friend, Jenna Waite.
Krista was diagnosed with breast cancer in late 2007, after deciding to go see a doctor when a snowboarding injury wouldn’t heal. It was a hard question to ask, but I had to get the details on Krista’s cancer—not only for the sake of the article, but for the sake of the many women out there who could find themselves in a similar situation. “So, please tell me, from the beginning, about Krista’s battle with cancer,” I asked Kim Doyle, Director of Retail at Brighton, good friend of Krista’s and brainchild behind Krista’s Park. Doyle began explaining how one day, Krista was snowboarding a terrain park in Park City. “She hit a rail but missed her landing and fell on her chest. The bruise was unusually large and the pain seemed unusual, too. She was worried and went to see a doctor. They initially dismissed the injury, but the pain and severity never subsided. She went back again and found breast cancer. She was in her early 30s, and healthy!” My heart sank, knowing that breast cancer is every female’s fear. It is a scary thought that you keep in the back of your head in order to not let it worry you, because the experts tell us we don’t need to think about it until our late 40s. “The cancer metastasized quickly,” Doyle went on to say. “Krista kept her condition quiet for as long as she could, but eventually, it was changing her life, [and] she couldn’t participate in the activities she once loved. [Friends] didn’t understand what was going on.”
Krista’s husband, Park Beutler, was at the event as well, honoring his late wife. His reverence for the situation was apparent, and each question I asked him about Krista was hard for him to answer. He paused and let a few tears fall with every mention of her. “How would Krista have responded to this terrain park if she were here today?” I asked, knowing it would be another tough question. As he wiped his cheeks, he said, “She would have been embarrassed. She was a modest person.” He wiped his cheeks again, looked to the ground and smiled. “She was beautiful and amazing,” he said. “We met right here, right where this park is. This used to be a half pipe; this couldn’t have been a better location for Krista’s Park.” I smiled as I listened to Beutler reminisce about his late wife.
Krista fought cancer hard and, like many cases, the cancer moved to other areas of her body, and eventually took her life in the spring of 2010. “She was an unbelievable person—my boss, my mentor and my friend,” says Stacey Adams, former SLUG Games coordinator and one of Krista’s besties who was there to share her love and support.
Krista’s Park came about this last July when Doyle, longtime associate of Brighton (her family owns and operates the resort), realized how very few events were around for women and how very few women even entered contests. She called Fisher and told him the idea of creating a women-only terrain park at Brighton in honor of Krista. Anticipating how well received this would be by female athletes, as well as the entire sports community, Doyle and Fisher then collaborated with Burton and Boarding For Breast Cancer (B4BC), a non-profit organization, to make it happen. Krista’s Park opened Dec. 21, 2013. “The park will always just be for women. Not only can we honor one of our dear friends by building this, but it is a chance for females to approach park obstacles without feeling the intimidation of male snowboarders. The features are smaller, and for beginning to intermediate riders, but really, the best part about the park is giving females this opportunity to progress and feel safe exploring their talents,” says Doyle.