00:00 / 13:13
Spotify Stitcher
RSS Feed
Share
Link
Embed
Working for a design firm is kind of like being a CIA operative. Everything is on a need-to-know basis. Whom you’re working for and your exact task at hand are between you and the client—everything else is cloak-and-dagger.There is one agent or agency that comes with referrals and recommendations for their expertise in creative intelligence: Super Top Secret. 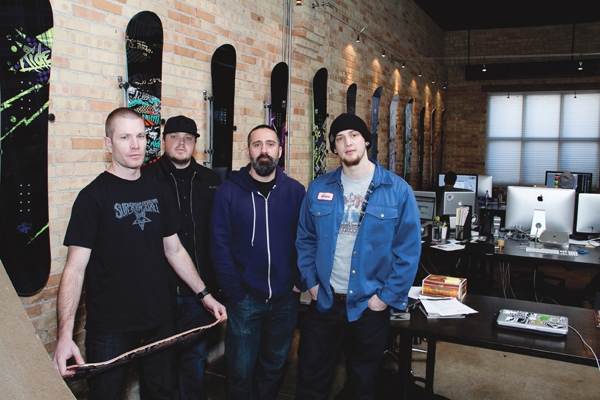 Working for a design firm is kind of like being a CIA operative. Everything is on a need-to-know basis. Whom you’re working for and your exact task at hand are between you and the client—everything else is cloak-and-dagger. You are contracted out for a mission—how you accomplish it depends on you. Like James Bond, there is one agent or agency that comes with referrals and recommendations for their expertise in creative intelligence, Super Top Secret. As a mole, I was able to manipulate the one Jared Strain into exposing STS for what it truly is. What follows is a confidential bio of conspiracy, passion and triumph, strictly for SLUG readers only—burn after reading.

Entering the headquarters of STS is unlike most offices. There are no cubicles or water coolers. In their place are rows of Mac computers and mini fridges stacked full of soda, energy drinks and beers—the latter not to be consumed during business hours, of course. Instead of heading out to the nearest coffee shop to unwind during a lunch break, you’ll find a ping pong table and mini ramp (thanks to friends at Celtek) to help you unravel when suffering from brain cramps. This is what sets STS aside from any other company out there: These guys live and breathe the lifestyles they portray in their designs. Strain told me that it was always his dream to have a skate ramp in his office when he grew up, and it was through this infatuation that this firm exists today.

Growing up in Lehi, Strain was like most action sports participants, skating everyday and brainstorming ways to one day be a part of the bigger things. “I was always that kid sending in sketches to my first influential brands: Vision, Powell/Peralta and Santa Cruz.” But things didn’t come to fruition until he enrolled in BYU to hone his skills. As his enthusiasm for design became his priority, he began to peddle skateboards at Proven Grounds in Pleasant Grove under the moniker of Declaration Skateboards. It was here that he met Milo manager and industry underdog Benny Pelligrino. “Benny has always been a huge inspiration for me and an even bigger supporter,” Strain recalls. This connection would be the one to plant the seeds of greater things to come, including this year’s MiloSport, Oakley, Cottonwood Canyon’s goggle collaboration.

It wasn’t until a vacation to Seattle that Strain would get his official break in the action sports design industry, more importantly. Randomly applying to a design firm called General Public would be his first industry job. “[General Public] was more involved with snowboard design, my second passion. I sent in my resume and was called back in to interview that day,” he says. With expectations of a pretentious design firm, Strain arrived at the firm to be greeted by one guy in a small room wearing camo boardshorts and a wife beater. Despite not having a portfolio on hand, the man offered him a job and Strain was in. Soon after, another designer was hired to work with Strain. Aaron Sather was fresh out of college and eager to showcase his talents. Over the next three years, Strain and Sather worked on designs for K2, Ride, Roxy, Morrow and Rossignol. With steady work, paychecks and a good client base, Strain was in professional bliss. One day, the anonymous man in black or green camo decided to toss the proverbial cog in the machine. He wanted out and asked Strain to buy his business. “[I told him] Hell no! I had zero interest in owning a business,” he says.

Within three days, the offices were cleared and the doors were shut. Fortunately, Strain’s and Sather’s work had spoken for itself and the clients were persistent on a sustainable relationship. Thus, Death and Taxes was born in 2007.  “All those brands we were servicing knew it was Aaron and I doing the work and asked us what we were going to do and why we didn’t continue doing what we were. So we set up shop under Death and Taxes,” says Strain. Like the name sugggests, it was inevitable. In order to secure payments for their work, they needed a title, not necesarily a business. In the meantime,  Strain made the move home and left Sather in Seattle to be the face behind the name for the local clientele. What started out as busy work turned into a career, and the two were churning out upwards of 40 deck designs a year. “We just basically started hustling. If you looked at our website, we looked like a big machine, but in actuality, it was just us two guys churning out an ass load of work.”

Requests for designs started rolling in from all over, including Atomic and Celtek, as well as the continued relationships with the aforementioned brands. Strain explained that the industry was pretty incestuous, but as long as they didn’t overlap ideas or designs, their potential work load was endless. As things started getting busier, certain aspects had to be outsourced. Eventually, the duo did a job with an interactive designer named Ryan Potter at Struck, another local firm, setting in motion the creation of STS.

“I was out to lunch with [longtime friend and advertiser for Struck] Ryan Martindale  and he was feeling me out on starting his own business. I told him, hell no, it’s a complete pain in the ass, the business side of things—especially when it comes to being that guy when it’s time to get paid,” says Strain. Despite the lack of encouraging words, Martindale still thought it would be cool to do his/their own thing, only if they had an interactive guy. Little did he know, but Potter, his co-worker sitting three desks away from him, was also in conversation with Strain over the same opportunities. Although never wanting to be more than an employee, Strain had to relieve himself of some of the operational duties of the D&T venture, and soon he became receptive to the idea. “We started to have ‘Top Secret’ meetings, as they still had their day jobs to deal with. Talks got serious enough that we brought an investor in as a partner and we were off to the races,” he says.

Since Colombus Day 2009, Super Top Secret has grown from a crew of five to 25. Over the past three years, the firm has been working hard on board graphics, iPhone apps, Facebook apps and web design for many major players in the snow sports industry including Burton, Celtek and Ski Utah. Currently, the team is working on 13-14 board designs and something special for Nike. With passionate team players, hard work and even better designs that speak for themselves, the cosmos are the limit for STS.  “There is an underlying spirit that runs throughout our shop, and it’s piss and vinegar. Something we don’t speak openly of, but fuels our fire,” says Strain. “It’s from years of people saying you will never succeed and you can’t do that. We have learned we can do whatever we set our minds to. We started this to afford all those around us with the same lifestyle we wanted to be a part of. As long as we have the passion, we will be that crew of misfits.”