Gregg Godfrey showed he’s the old vet by back flipping a tricycle right out of the gate while Crum took a more laid back approach, launching the La-Z-Boy. Tyler Roberts rode his cooler over the ramp and Chanler Godfrey front flipped a mini bike. Jolene Van Vugt, aka the toughest chick in the world, took her Barbie car for a 50-foot ride. This is the most talented and badass family around.

The Boys are Back in Town: Nitro Circus Live Hits the Salty City 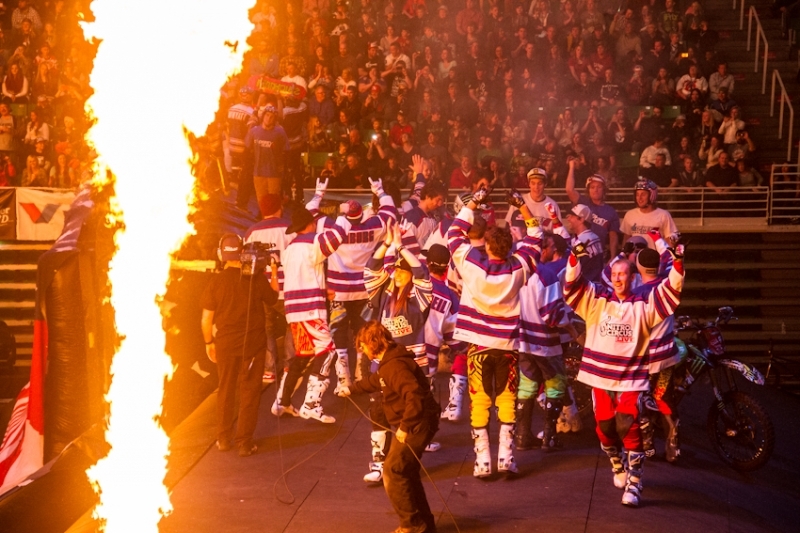 A couple of months back, I had the privilege to go spend some time with the brain behind Nitro Circus, Gregg Godfrey, and the blood related collection of civilian dare devils that call themselves The Godfrey Clan. Upon asking questions regarding their first North American Tour with Nitro Circus Live, Gregg explained how important the Salt Lake show was going be to him. I remember a conversation where Greg said, “If the crowd is not on their feet the whole time, then the show will be a disappointment.” This past Friday, Nitro Circus Live absolutely blew away the Energy Solutions Center with a hyped up crowd that only fueled the fire and excitement. Step aside, Barnum & Bailey—Nitro Circus is the new “greatest show on Earth.”

Upon walking into the Energy Solutions Center, I had to take a minute to get my bearings. Dirt bikes soared across what usually sits as a basketball court while riders of all types hucked themselves off the 50-foot Giganto-Ramp, and this was just practice. This was Nitro’s eighth show of the tour and a special one at that. With Salt Lake City being the home of Nitro Circus, the star-studded crew was ready to put on a show to remember.

As the crowd filed in and the arena filled up to its capacity for the sold out show, it was interesting to see all walks of life coming out to see the madness that is Nitro Circus. Friends and families, old and young, rednecks and hipsters, everyone was included. As the lights went down Nitro’s Aaron “Crum” Sauvage and Street Bike Tommy provided some pre show entertainment including a little kid dance contest for prize contraptions (that was obviously hilarious) and a Crum kiss cam that ended with a tackling smooch from an older patron in the crowd that got everyone cheering from the start. After that, the riders were introduced and horn was blown. To follow was a massive train of back flips by every athlete on the Giganto-Ramp. Pyrotechnics reflected off of my eyeballs and my jaw hit the floor like a brick. It was a kick to the nuts from the start, to put it lightly.

The show was sectioned into themed segments lasting roughly half an hour each. Mountain and BMX bikes were flipped and whipped around as skaters Chris “Beaver” Fleming and Lyn-Z Adams Hawkins Pastrana threw down some high-flying action of their own, including a double finger flip by Beaver and huge back three melon grab by Lyn-Z. Skis, snowboards and inline skates also lit up the ramp and some even went outside their comfort zone jumping on new equipment. The Godfrey Clan was sending it from the start on anything they could get their hands on. Ethen Roberts jumped from bike to skateboard with his doubles partner, inline skater Chris Haffey, sending him crushing down on the board, getting “ohs” and “ahs” from the crowd, as well as some comic relief when no one appeared to be seriously injured.

The FMX riders roared from the back of the stadium into the next part of the show, throwing the old school, new school, and just plain insane tricks that have developed over the years. An all-star lineup consisting of guys like Aussie Blake “Bilko” Williams, 18-time FMX medalist Nate Adams, as well as too many other legends to name. Ringleader Travis Pastrana was not riding in the show due to an injury on the first part of the tour but was still front and center for his show, hyping up the crowd and the athletes alike. “Travis pulls out the best in everyone.” Says Beaver, “He just has that personality to inspire everyone.”

The madness of the show continued with the fan-favorite contraptions. Gregg Godfrey showed he’s the old vet by back flipping a tricycle right out of the gate while Crum took a more laid back approach, launching the La-Z-Boy. Tyler Roberts rode his cooler over the ramp and Chanler Godfrey front flipped a mini bike. Jolene Van Vugt, aka the toughest chick in the world, took her Barbie car for a 50-foot ride and Brandon Schmidt double back flipped his snowboard, which was on wheels, of course. The jumps were complete madness and the Nitro science projects just kept coming.

As the show went on, the crazy/awesome/stupid antics continued. Volunteering to do these things is dangerous and crazy, especially when you are an inexperienced young spectator from the crowd. Volunteers Nick and Daniel ruined some perfectly good boxer briefs when their participation in the show amounted to a three-man motorcycle back flip with Cam Sinclair as the driver. Matt was the third volunteer, which sent him piggyback with Jed Milden in a BMX back flip. Both attempts were successful and everyone was beyond stoked when they stuck it. Lots of credit goes to those dudes for volunteering for probably the coolest and most terrifying experience of their lives.

The competitive nature of the Nitro family showed in the U.S. vs. World athletes part of the show. Both teams put on a clinic of absolute awesomeness for the crowd that resulted in the American team winning, of course. Pyrotechnics fired throughout the stadium in synchronization with the athletes, as the Nitro Bomb, which includes trains and back flips from almost all of the athletes, exploded throughout the arena. The trains continued after a slight break for both the FMX and Giganto-Ramp, probably as a warm-up before they pushed the ramps back a bit.

Big air was the name of the game for the last hour of the show, with every athlete going bigger and better every single time. Gavin Godfrey laced a huge double back flip on his man-trike and Adam Jones sent a double grab back flip on his motorbike. Trick after trick and run after run, these guys put on a serious show, stomping more than the majority of ridiculous tricks thrown. Being a live show, perfection is not always guaranteed. Aaron “Wheelz” Fotheringham showed his perseverance and determination stomping a perfect, second-try front flip on none other than his ramp-destroying wheel chair. Seeing something like that was an amazing experience and Wheelz is a master at what he does. Inspiration and absolute amazement flooded the building when hosts Bruce Robson and Jeremy Rawle told story after story of these athletes persevering through injuries to get back up and do it again. Guys like Jaie Toohey stuck a back flip triple tailwhip, a trick that put him out more than one time. James Foster threw a triple back flip on his BMX bike, one of the most dangerous in the game. Josh Sheehan threw an unbelievable FMX double back flip, a trick that put fellow Nitro Circus Live athlete Cam Sinclair in a position where he didn’t know if he would walk again. I could go on for days about tricks that they stuck and things I have never seen before in my life, but stories like these and the noticeable camaraderie between the riders is what gives Nitro Circus a family feel, as described by Godfrey and several other riders. This is the most talented and badass family around.

The night concluded with a finale Nitro Bomb and celebration by all of the riders atop the landings. As confetti and sparks filled the air, clapping hands and hoarse throated cheers chimed in as well. It was an explosive ending to an incredible show that you truly need to see to believe. Salt Lake is the home of Nitro Circus and the team showed how much they loved to be home. Until next time, keep your heart pumping with new seasons of Nitro Circus and search the live show online. I mean it when I say, “See to believe!” Check out SLUG’s photo gallery of the madness here.