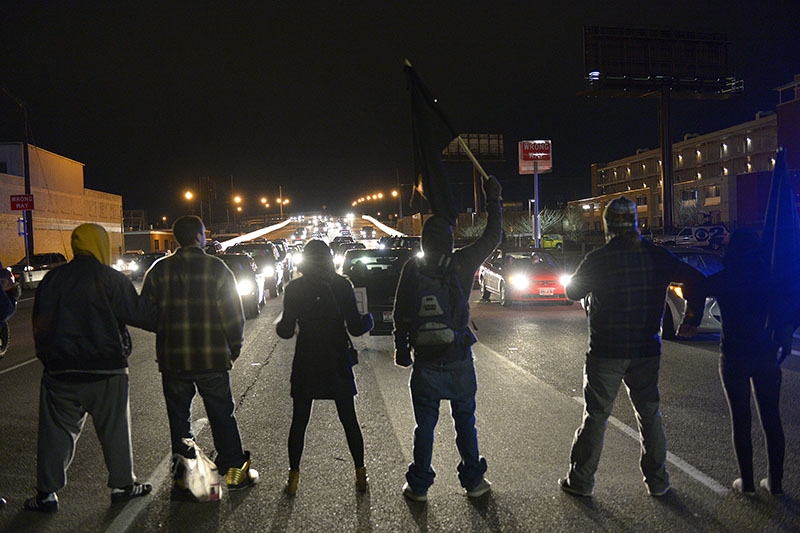 Protesters blockaded the freeway exit from I-15 on 600 South. Photo: Leah Hogsten | The Salt Lake Tribune

Tonight’s events [Dec. 19, 2014] make two things perfectly clear. The first is that tension toward the police is clearly present among a ragtag group of protesters braving the December cold. The second is that protesters are pushing the envelope when it comes to their methods of directing anger toward the police, using direct actions that have uncertain consequences for a movement seeking justice. Contrary to popular belief, the rally was not organized or endorsed by Utah Against Police Brutality. Organizer Chris Manor made this perfectly clear, saying, “This is not my show,” to anybody who inquired about Utah Against Police Brutality’s involvement during the initial assembly at the Wallace F. Bennett Federal Building.

Rather, the protest was orchestrated by a group called the Activist Corner that wanted to hold a demonstration in solidarity with what was going on in Ferguson and elsewhere in the nation. Organizer Ruddy Carpel described the group as having recently come together and not really having previous ties to other activist groups. They figure out the details of building a movement as they go and operate in a sort of democratic fashion—like holding flash meetings to build a consensus before acting. One such meeting that I overhear at the rally is to decide what do after the speeches, like whether to march or blockade.

The individuals that make up tonight’s cast are diverse characters who appear a bit disorganized. Among the groups I can identify are Black Bloc Anarchists and a guy holding a fishing pole with a doughnut dangling at the end. Having seen the latter gentleman before, one has to wonder if the pastry has gone off by now or if it’s newer purchase. Regardless, it is probably stale, thanks to the cold. While waiting for more folks to show, Carpel switches on some anti-police hip-hop. The music is awkwardly entertaining and gives the rally a more of a block-party feel.

Just as soon as the music is turned on, it is switched off. Finally, the speakers are getting on with it—well after the start time. The speeches all provide similar messages, like calling for the police to take independent accountability or the need for solidarity. Speaker Malik Dayo provides a message a bit more to the point. He calls for the disruption of everyday live to make the call for justice heard. He voices disgust with the grand juries, saying, “The Grand Jury is basically the police officer’s attorney.” He further highlights the keen relationships that officers have with justice officials as a point for concern.

While the speeches are being given, three individuals uniformed in reflective vests and dark clothes come up behind me. Equipped with batons in their holsters, they are a surprising if not an alarming sight. Initially a bit taken aback, I quickly learn they are with the Legacy Initiative, a group that provides homeless outreach. They’re here promoting the new lockers being proposed to safeguard homeless people’s belongings. Taking a deep breath, I am relieved that shit is not about to go down.

The conclusion of the speeches invites another consensus on what to do next. The protesters, some 40 odd individuals, acknowledge that they would not be able to hold a blockade like the previous demonstrations hosted by Utah Against Police Brutality. However, they decide to take the streets and march to blockade the freeway on 500 South. Wasting little time and riding a wave on enthusiasm, the activists march down State Street.

The march obstructs traffic as the Activist Corner  string out across the road—affecting a blockade. Looking back one could see the bright headlights of cars back upped for blocks. Unlike the other protests, which numbered in the hundreds, the pissed-off drivers who were backed up for blocks didn’t have that many demonstrators to get through tonight. Whenever the blockade lines faltered, angry motorists took advantage of the break and whizzed on by.

These blockade runners don’t get past the demonstrators without incident, though. There are many occurrences when a car comes too close for comfort or plows straight through, bumping people out of the way. One truck goes through the lines, taking a banner wrapped around the bumper. This happens during the last blockade in front of the highway exit on 600 South. In retaliation for these close calls with 2-ton metal objects on wheels, agitated protesters assault reckless cars with poles or fists. Some demonstrators make a point to try and hold back the advances by jumping on the hoods of the vehicles attempting to escape.

It is surprising that, with the clear and growing ire of the motorists combined with the agitation of demonstrators, that nobody is dead or injured. There are, of course, close calls. During the march toward the highway entrance on 500 South, protesters link arms, obstructing cars from getting past. Again, this causes a long back-up of motorists all along 500 South. When a break in the blockade line appears near a parking lot on 500 South and 300 West, one car takes its chance by zooming onto the sidewalk to get around the protesters. The hasty action of the ill-tempered driver nearly costs the lives of yours truly and two fellow journalists from the Salt Lake Tribune. Though this near-meet-thy-maker experience provides one hell of a shock to the system, with the way things are going, it’s only a matter of time before things get out of hand.

In another particular case of driver and protester exchange, a single activist tries to take on a motorist who has gotten through the lines. He makes threatening gestures and seems to lift the back of his shirt up. It is hard to tell exactly what the purpose of this action is from where I am observing. However, his hand moves toward the back of his pants in an intimidating sort of motion. It is a gesture that suggests drawing a weapon. This provocation on the part of the demonstrator is surprising and stupid. It continues until he is led away by another activist.

One might ask where the police are during all this commotion. Well, they didn’t get to the scene until the blockade hit the first highway. They only serve to direct traffic away from protesters or prevent activists from entering the highway. It is a wonder that no one has been arrested yet, especially with some motorists calling for the blood of the demonstrators a few very near misses.

After an inability to continue the blockade, the remaining protesters gather in a circle to hold another consensus meeting. Unlike before, there is an apparent distrust of the media, as one Black Bloc anarchist blocks the camera of a Channel 4 news crewman. While some participate, other demonstrators hang about. The conclusion of this hastily set up meeting inspires the demonstrators to depart the scene unchallenged.

The protest is celebrated as some sort of victory by the present demonstrators. The purpose was to show solidarity with actions all over the country by disrupting the functions of everyday life to gain attention to the issues of police brutality. Clearly, the only way to make this a visible issue is through methods of direct action. Let’s face it, when did simple sign-holding bring about a resolution to a controversial issue? It is through directly challenging the system do things actually happen. However, direct actions are also about gaining sympathy and support toward the cause. A good example is the sit-ins conducted by civil-rights protesters who directly challenged racism and segregation. Another great example would be when during the Eric Garner demonstration. Protesters did die-ins, marches and chants to bring the issue of police brutality into the lives of everyday folks doing their shopping. During this latter action, nearly everyone witnessing the protest had their phones out, documenting the events as they were unfolding, allowing the world to see.

That said, I’m not sure what the consequences of tonight’s actions will look like. These protesters didn’t necessarily challenge the police; rather, they obstructed the populace. While blockading is certainly an effective tactic to bring attention to the issues in question, what are the consequences of the reckless retaliations on part of protesters toward motorists? Will those actions sour sympathy toward the movement and cause a reactionary backlash? I’m not sure, and to be clear, on a purely emotional level, I sympathize with wanting to strike back after nearly being hit by a car. However, during these tense situations, there is a need for cooler heads to prevail in order to prevent reckless encounters and avert certain disaster. Also, while some may suggest the police presence to the blockades to be a weak response, the cops actually maintained an effective peace. Their presences can possibly even be attributed to averting a harsher reaction toward the protesters from the motorists, who, given the chance, may have sought a new blood-red paint job for their cars.

This night’s actions further demonstrated that when there is a lack of clear organization, stupidity takes the place of reason. There is an obvious, still-brewing anger toward the police, if not toward the existence of an entire unjust system. This is evident, as news sources just broke out with the story of two NYPD officers being shot over the weekend. It is clear that things are heating up and possibly getting worse. Unfortunately for the protesters, I don’t think the police or their masters in Salt Lake City felt any inconvenience tonight. Rather, I’m pretty sure only ordinary people got the brunt of that. The question now is: Was tonight actually worth it? Did the demonstrators actually show clear solidarity with their peers? I’m afraid I can’t answer this—it is a question that is best left to the public, and they are harsh critics.