Trisha McBride is a lady of endless energy. Her many talents include designing jewelry, clothing and costumes, choreographing and performing in a variety of dance styles, practicing and teaching yoga and even fronting experimental musical projects. This year at Craft Lake City, she will be performing with her belly dance troupe, Lunar Collective, as well as selling some home-crafted goodies at her booth.

The Crafty and Captivating Trisha McBride 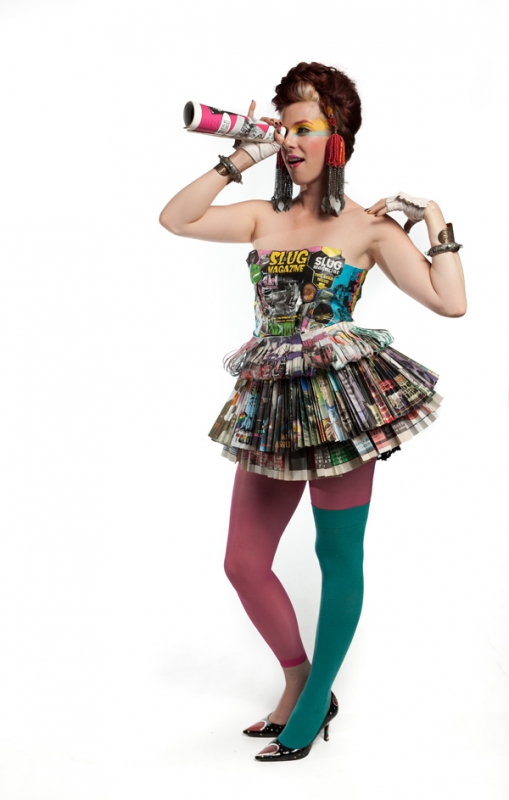 When Trisha McBride has her eye on a creative project, something beautiful’s bound to bloom. Photo: Brent Rowland

Trisha McBride is a lady of endless energy. Her many talents include designing jewelry, clothing and costumes, choreographing and performing in a variety of dance styles, practicing and teaching yoga and even fronting experimental musical projects. This year at Craft Lake City, she will be performing with her belly dance troupe, Lunar Collective, as well as selling some home-crafted goodies at her booth. “Every July, it’s lockdown time,” McBride says of her preparations for the fest. “Craft Lake City has become a fun dedication for me.”

McBride has participated in CLC for the past three years, ever since she returned to SLC after spending some time living in New York. “There were craft fairs like this happening [in Brooklyn] … but this is Utah! We are the craft masters of the universe!” she says of our homegrown craft extravaganza. This year, she is preparing to present a small collection of fall fashions, including capelets and skirts, as well as some of her staple favorites, like bloomers and hoodie dresses. She has accessories and trinkets to decorate yourself by day or bolder pieces for a performance by night. It was while living in New York that she was inspired to teach herself how to sew. Now her goals include hitting up Fashion Week in Ghana. She admires the designers there because they are still making it all by hand, rather than sending it off to factories to be made by foreign children. “If [a piece] has been made properly, you can feel it,” she says.

McBride also has a special performance planned for the entertainment part of the DIY craft fest. “[This year], I’m putting a lot of energy into the performance piece,” she says. McBride created the choreography inspired by Athenian playwright Euripides’ ancient Greek tragedy, “The Bacchae.” Lunar Collective, which consists of McBride and her duet partner, Kelly Brown, will be joined by over a dozen other dancers to perform the piece. If you are familiar with the tragic play, the idea of 20 or so women performing McBride’s interpretation of “The Return of the Bacchae,” as she lovingly dubbed it, might just scare the shit out of you. The Bacchae that Euripides wrote about are raving, drunken, dancing women who are driven to this state of frenzy by the God Dionysus, the central figure in the tragedy. The story gets pretty gory, decapitation and all, so the interpretation is sure to be captivating, and maybe even a bit disturbing. If you’re familiar with Trisha McBride, you know that she wouldn’t do it any other way. “I’ve had this piece in mind for five years, and it took the right women to come along and make it happen,” she says. The piece is her brainchild, but the collaboration with her dancers is important to her. They spent time together making their costumes, drinking wine and preparing to wreak beautiful havoc all over the CLC festival grounds.

McBride’s affair with the world of the art runs deep. Her love of tribal belly dance was ignited back in 1998 while living in San Francisco and studying under modern belly dance maven, Jill Parker. “I was just right for it. It was like lock and key,” says McBride. While the tribal style she originally studied may have been her first love, Lunar Collective now performs everything from traditional styles to modern styles, including cabaret, Turkish and American tribal variations. Their Craft Lake City performance will be the debut of McBride’s “Return of the Bacchae,” but she is hoping to perform it as much as possible after the fest in preparation for the upcoming annual Witches Ball.

This year, SLUG requested a custom-made, Trisha McBride original creation made entirely out of an assortment of vintage SLUG Mags. “I have never worked with paper before,” she says about the challenges of the project. “When they hit me with the challenge, I was like … OK guys, I dare you to dare me.” The adventure of creating a three-dimensional piece of clothing out of the not-so-pliable two dimensions of paper is nothing to scoff at. SLUG is proud to showcase her hand-crafted piece on the cover of this month’s issue, which is largely dedicated to celebrating the incredible crafting community that Craft Lake City continues to foster.

With all of this on her plate, along with her regular day-to-day obligations, the real question remains: how to do it all and still have balance? “I wanna live my life in harmony … and what gels it all is the yoga,” McBride says. “What brings the creative energy is the yoga.”  Lucky for us, McBride doesn’t just practice yoga, she teaches at Centered City Yoga where she numbers among some of SLC’s most dedicated yoga instructors, including our very own local yoga guru, D’ana Baptiste.

Next up for McBride is the adventure of tackling the Little Black Dress, so be on the lookout for new goodies in the next few months. For now, be sure to stop by her booth at Craft Lake City, and don’t miss Lunar Collective’s sure-to-be-tantalizing performance. Check out trishamcbridedance.com for all the goods, and to find out where Lunar Collective will be performing next.