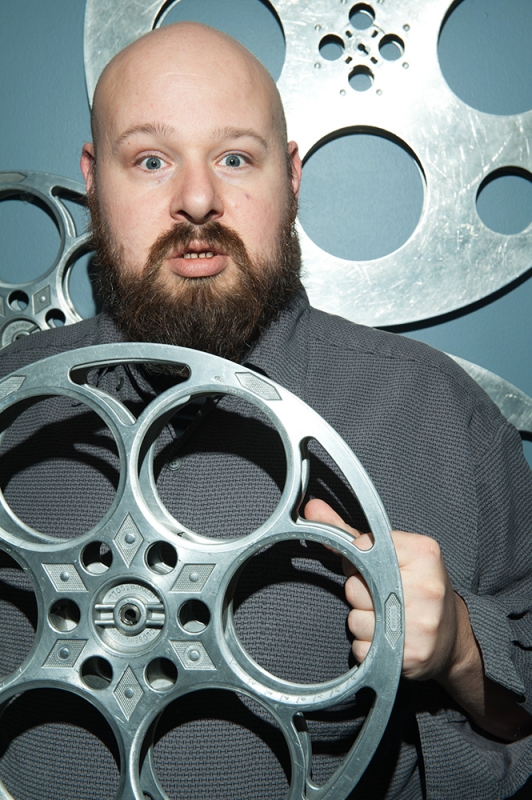 The Dying Art of Light

Over 100 years after Cinématographe was invented and used by the Lumiére brothers in France to show the first paying audience a projected film, Edward Norton looks directly into the camera as he explains the job of a projectionist in a scene from Fight Club. “Why would anyone want this shit job?” he asks as his alter-ego Tyler Durden splices pornography into family cartoons. “Because it affords them other interesting opportunities.”
Walking up the steps to the projection booths of the Salt Lake Film Society’s Broadway Theatre, I imagine what it would’ve been like, watching that scene from Fight Club when it showed in theaters in 1999, from a projection booth—like looking at a reflection, perhaps. Lance Walker, SLFS Head Projectionist, has been working in the booth since 2001, just before the Salt Lake Film Society came into fruition to save the Tower Theatre from demise. “There really wasn’t anyone else who could come here and do it, so they trained me and the other guy who was working the concession stand at the time … They showed me really fast how to do it, and everything else I’ve had to learn on my own,” he says. Walker speaks slowly and affirmatively—he reminds me of a more subdued version of Wallace Shawn’s character in The Princess Bride—a little bored, a little cynical, and his rare smile reveals an endearing gap in his teeth behind a full beard.

We walk through the hallway to the projection booths and Walker apologizes for the smell, but the overwhelming aroma of popcorn that fills the lobby below doesn’t seem to penetrate the dark upstairs. Instead, the winding hallways contain a light scent of dust among the organized clutter of boxes, tables and machines—very few people come up here, which is part of the magic. “I like the projection booth because it’s like a dark hole that no one really wants to go into,” says Walker. “It’s loud and dark and it’s not a place for people to go.”

Tyler Durden defines the employment opportunities of a projectionist as creative mischief, but speaking with Walker—and having worked in the movie theater business myself for nearly a decade—I realize that, though most projectionists aren’t using their position to terrorize children, there’s a certain character trait needed to draw someone to the booth: those who find solace in solitude. Walker tells me he’s not much of a film fanatic, citing The Shining as a favorite, and admitting he prefers B movies he can watch and be done with in the comfort of his own home. “ … I can pause [the movie], get food or drink, go to the bathroom and never miss any of it. I can have the lights on or off. I don’t have to come into work or any of the other movie theaters, now very demanding of you knowing exactly where you want to sit. I’m not into that,” he says. “I guess I might be a control freak.”
A few days later, Scott Farley of Brewvies Cinema Pub, and I sit in a booth at Juniors discussing his own film interests: “I think I have a fairly deep knowledge of film for a pedestrian, but not for a film buff,” he says. “I would say that I am an autodidact and there were times when it was necessary for me to know film … I sort of tried to surround myself with people who were real cinema heads and try to get them to educate me, but … I am pretty absent from my own personality, and what people tell me to think, I’m pretty easily convinced of … ” Having spent a few years’ worth of Friday nights with Farley closing up Brewvies when I worked there, I can personally attest to his above-average knowledge and understanding of film, having benefitted from a number of his recommendations—and anyone can call the Brewvies Movieline at 801-355-5500 to hear his forcibly optimistic and concise reviews for the current lineup.
Farley’s history in the booth starts in Logan, when he was attending Utah State University in 1985. “You try to have jobs, and since you can’t make a lot of money because there isn’t a lot of money to be made unless you’re having a miserable life, you come up with jobs where your perks also fill your social needs,” he says, explaining what led him to start working at a movie theater. “Dates were free, and I could hook up friends on any number of levels, so I had entrées of social significance greater than just my charming personality.” Farley eventually ended up at the Tower Theatre, working under Greg Tanner before the SLFS took over, making his way to Brewvies in 1997. “I kind of left being a projectionist when I came to Brewvies,” he says, admitting that the years he’s been at the cinema pub have been more fruitful as a bartender. Though it’s true that the job is now predominantly accomplished by the bussers, they’re trained at a very surface level, making Farley’s nearly three decades of projection experience crucial when it comes to troubleshooting impending film disasters—soon to be antiquated memories.