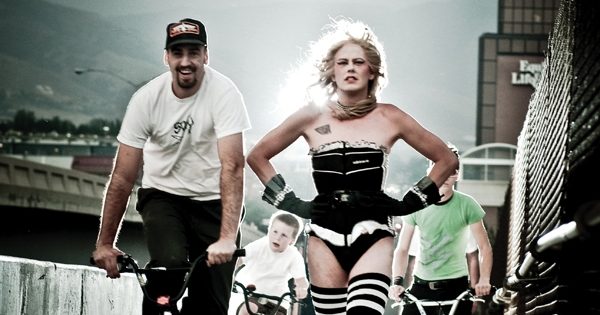 The Princess and the Pro

People constantly ask me how I keep my lithe stature and showgirl calfs. My answer is as simple as my regimen: a mix of bicycling with light jazz-handing on Tuesdays and Thursdays. I’m an avid cyclist 365 days. Like, haven’t-owned-a-car-in-15 years, rode-my-bike-across-Europe-twice kind of enthusiast. Riding your bike to the store or work or the corner allows you the freedom to eat what you want and not spend countless hours in the gym. In fact, I think that if you live, like millions of Americans, within a two-mile radius of your life, then you’re a total dumbass for even owning and wasting thousands of dollars yearly on an auto. One of the concerns about bike riding I’ve heard is people not wanting to be sweaty when they get to work. First off, if you bike a mile, to work and can’t recover with a change of shirt and a quick whore’s bath, then get to a doctor pronto and ride the bike a lot more. The city is wonderfully flat and you’d be surprised at how easy it actually is to get around in the winter. Just bundle up and take side streets, they get plowed in the morning and no one is on them.

I’ve decided to immerse myself in bike nation while I write this month’s column and find out the madness of the passion, hoping to talk at least one of you into winter cycling. I started by pulling inspiration, as I always do, with a photo shoot by the amazing David Newkirk. I asked two of my friends to be in the photos with me: one that has something to do with the BMX world, and one first time bike owner, seven-year-old Sawyer Evan. I asked these two in particular in an attempt to capture the spectrum from the beginning rites of passage of bike riding to the professional. High art!

“In fact, I think that if you live, like millions of Americans, within a two-mile radius of your life, then you’re a total dumbass for even owning and wasting thousands of dollars yearly on an auto.”

Next, I decided to hang with our friends we met at Pride for a couple of nights: the Salt Lake Bike Collective, who valets bikes for the Farmer’s Market and the Twilight Concert Series. The Salt Lake Bike Collective have been around for seven years and do a lot of good things for the community, including charity work, youth programs, community service provision and rights activism. Monday nights from 5 p.m. to 9 p.m. they have this really cool arrangement to come in and volunteer time working on bikes for people of all needs: refugees, missionaries, victims, low-income families and fellow care providers. I was totally blown off my stilettos by the laborers’ dedication and enthusiasm towards the cause. All types of talent from mechanical pros to former community service workers come back to use the Collective as a safe haven while learning a trade. They start with a class promptly at 5pm (usually of the volunteer lay-person’s expertise), then for the next couple of hours, you help and learn on the charity rides. The wall is filled with thank you cards from elementary schools and the numerous other organizations that they work with. On Tuesdays and Thursdays from 5-9 p.m., they offer an open workshop where the average tranny can come in and grease up with a knowledgeable professional that will help you understand and fix anything on your ride.

I next made the effort to go to the monthly Mayor’s Bicycle Advisory Committee pow-wow, which is held at the City and County Building in room 335 on the second Wednesday of every month. As dedicated to the cause as I am, I just can’t concentrate in this sort of structured environment. I did, in between nail polish daydreams, hear what I went looking for: they do take measures in the city to make cycling safer and friendlier for winter riders. For example: reflective tape on dangerous curb “bulb outs” that disappear in the snow.

“As dedicated to the cause as I am, I just can’t concentrate in this sort of structured environment.”

I searched in every nook and tranny of my life to find the people I know that actually live the life cycle. I remembered I had this friend with this cute hobby in the BMX world. I invited him over to find out about his little pastime and get him to help me work on my new dream BMX: hot pink with gold El Camino rims and pegs. Matt Beringer is this super nice, super hot guy I met at a party about four years ago. He looked so adorably vacant and I was instantly taken by his mellow nature and sense of humor. The Princess, after an uncomfortable 10-minute conversation, usually freaks out most boys of this brand. Matt was so genuinely nice, I knew that I had made a new friend. A couple months ago on a hike, I was surprised to hear that he had toured the world with his little trick riding. The story he told me over burgers and monkey wrenches completely took me off guard.

Receiving his first bike at the age of six, he promptly started racing the local circuit. Momentarily side-tracked by a skateboard, he retired until the age of 16 when he got back on and into the national races. It wasn’t until 1997 while working at Bingham Cyclery in Layton that he was spotted showing off his famed, what we queens call a gimmick, front flip. Like that, his career started. His heyday with Red Line featured him dirt jumping his magic across the world, competing and conquering such acclaimed events as: The X Games, MTV’s Sport and Music Festival, Vans Triple Crown and The Dew Tour, and snatching up sponsorships along the way from companies like Bingham, Schwinn and Airwalk. Moving over to S&M in Y2K, he’s been their team manager for almost ten years. On his first video trip for Road Fools 7, he started to discover he was losing his passion to compete and has now thrown himself head over wheels into stunt video, traveling city to landscape to skate park being recognized by his throngs of fans for the super-god that he is.

“The Princess, after an uncomfortable 10-minute conversation, usually freaks out most boys of this brand. Matt was so genuinely nice, I knew that I had made a new friend.”

Wow. I feel like a total asshole! Here is some guy that in a different circumstance, I ashamedly admit, I would have probably looked through totally for the sake of ‘different world’ bullshit. I thought I was being so cutting-edge coming out and surprising people that I’m a green queen with more than drunken war stories. What I’ve learned is that this super nice, super hot guy never once judged this trancycle by its frame. In all the time I’ve spent Google searching, Youtubeing and obsessing on myself, I’ve had an extremely accomplished friend that I never took the time to know and give the props he deserved. Matt, this article is for you and I apologize for talking down to you about “your little bike thing.” I get it. The pedals go both ways. Thank you for pulling my head out and helping me realize that maybe, just possibly, there are people more interesting than me.

Have a safe and fun Labor Day weekend. Don’t forget to check out the Paper Bag Princess blog on slugmag.com to find what your holiday plans should be.