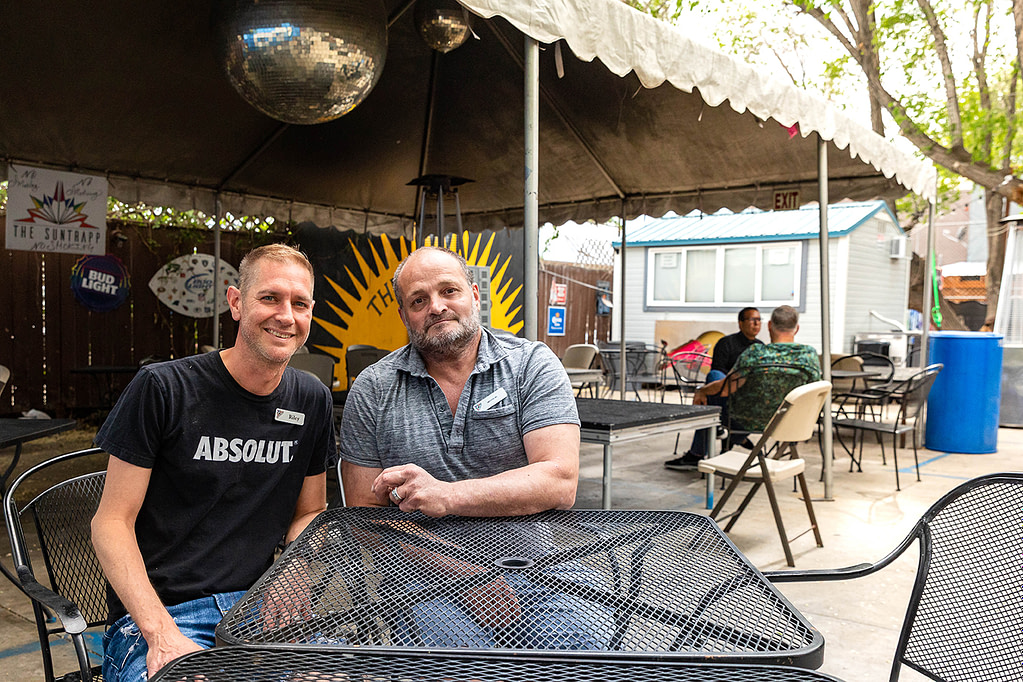 From the ’70s to the early ’90s, two iconic bars were at the epicenter of the gay nightlife scene in Salt Lake City—The Sun Tavern (The Sun) and The Trapp. The Sun was opened in 1973 by Joe Redburn as the first real gay club in the conservative state, and was also accoladed as the first “disco” as the bar housed the first ever disco ball on a dance floor in Utah. Redburn sold The Sun in 1990 and he opened The Trapp in 1991 as a country-western gay bar. Sadly, The Sun was blown over in the 1999 freak tornado that hit central Salt Lake, and The Trapp was sold around the same time.

Rob Goulding, a beloved member of the community, purchased The Trapp, which he renamed The Sun Trapp as a nod to the importance of both bars to the LGBTQ+ community. Goulding was diagnosed with pancreatic cancer and passed away in 2018, leaving the bar to close friends Riley Richter and his husband Micheal Repp. Goulding shared his vision for how he wanted the bar to grow with them, and the pair have done everything in their power to make that vision a reality.

Repp serves as the bar’s Community Outreach and Patron Liaison, and Richter had been bartending at The Sun Trapp for a while when Repp started working on the weekends. That was six years ago, and both Repp and Richter are still a part of The Sun Trapp family today. Repp says, “I never wanted to be part of a gay bar. I was more of a house party kind of guy growing up.” Knowing this, Repp was shocked when he became associated with the longest standing gay bar in Utah—and proudly so. Joining The Sun Trapp has made Repp more understanding of every color of the rainbow flag. He says, “When you’re a gay male, there’s a certain privilege within our inner community [where] you don’t take the time to understand [others].” Repp describes a beautiful feeling that stems from the inclusivity the bar has given him—the opportunity to develop and mature within himself.

“When you’re a gay male, there’s a certain privilege within our inner community [where] you don’t take the time to understand [others].”

Over its 20-plus-year tenure, The Sun Trapp has become an icon for the LGBTQ+ community in Salt Lake, a true haven. Though, all-inclusiveness was not achieved overnight: For some time, there was a reputation that this was a “gay man’s” bar, rather than a more broad, “LGBTQ+” bar. The scene slowly transitioned to an all-encompassing environment through Repp and Richter’s welcoming efforts toward all who step into the bar.  Repp is proud of The Sun Trapp, but he’s also ecstatic about the expansive support the straight and LGBTQ+ communities alike have shown toward the bar.

Supplementing The Sun Trapp’s rich history and inclusive atmosphere is the bar’s dedication to give back to the community that enlivens their dance floor every night. Repp exudes gratitude for the donations that they collect for nonprofit organizations across the board, one of the biggest being the PrEP program. PrEP stands for “Pre-Exposure Prophylaxis,” and it’s a way for people who are at high risk of getting HIV to prevent infection by taking a pill everyday. Repp says, “The younger generation is targeted for being really frivolous, and it’s important that they have not only the education but the decision to get on medication to prevent a horrific disease.” It’s easy for new owners of a business to lose the vision of their precursors, but Repp expresses the importance of The Sun Trapp’s rich history to him and Richter, actively choosing to embrace and expand upon it. Repp looks back fondly at that history and is thankful for how far the bar has come.

“Supplementing The Sun Trapp’s rich history and inclusive atmosphere is the bar’s dedication to give back to the community,”

As the light is starting to shine for each of us after the residual darkness of last year, The Sun Trapp is feeling the same effects. Bar service, dancing and drag shows were all stopped but are coming back in full force. An even bigger event is on The Sun Trapp’s radar—Pride. The Sun Trapp’s Pride festivities are going to be bigger than ever this year during the weekend of June 4–6. DJ Naomi and DJ Eddy V, who have been a part of The Sun Trapp’s culture for years, will be mixing top 40 hits most weekend nights. The Sun Trapp will also present drag shows during Pride—but also every night—at the bar. On Sunday, June 6, The Sun Trapp will raise funds for the Utah Gay Rodeo Association through the benefit of a laidback BBQ. The Sun Trapp has even managed to shut down 100 South in downtown Salt Lake City in order to increase the bar’s capacity for the Pride weekend, proving that there is no limit to the love that The Sun Trapp has for its community and the hoops they are willing to jump through in order to show it.

Find more information and keep up with their Instagram @the_suntrapp.