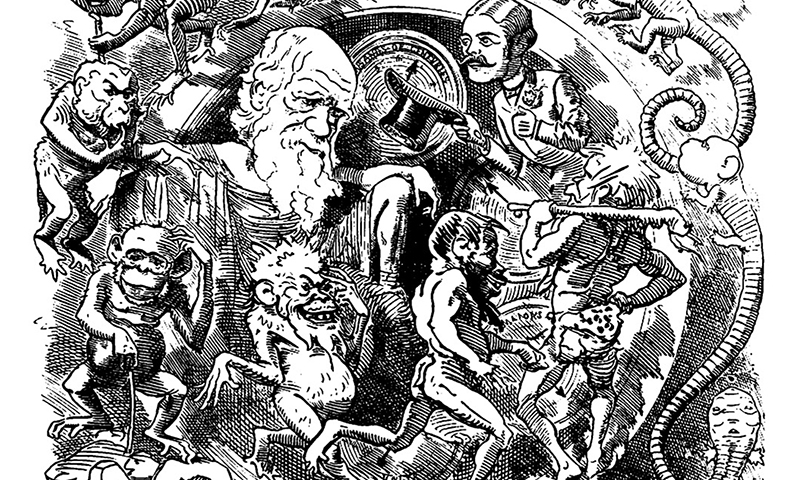 The Wardens of Darwin

Do science and philosophy belong in SLUG? What could be less UG? Well, some of the most exciting (and perhaps dangerous) action in SL is going down in public, funded by government bucks. Eager for risk, I headed to the Coffee Garden and pulled up next to Anya Plutynski of the University of Utah’s Department of Philosophy. We discussed Darwin and Darwinism(s), a new class which arose as Anya’s rebuttal to Utah State Senator, Chris Butters’ 2005 bill calling for the state-mandated teaching of Intelligent Design. By way of encouragement and support for this project, Anya received an Honors Professorship award.

With regard to Chris Butter‘s proposal that Utah’s schools should “teach the controversy,” Anya speaks definitively: “There is no controversy, at least not among practicing biologists.” She points to a growing cultural and political divide between academics and the rest of America. “We trust doctors and do anything they tell us,” she says, “but we don’t trust people who have had just as many, if not more, years of scientific training in medicine’s foundational principles … I find it baffling.”

I asked how Darwin relates to the godfathers of modern radical thought: Marx, Nietzsche and Freud? “Like this,” Anya says. She grabs my pen and spells Darwin above the three names jotted in my notes. Then she draws three arrows linking Darwin to each of them. “Each saw himself as Darwin’s legitimate heir,” she said. The connection to Marx and social progress seemed clear enough. Then I recalled that Nietzsche (the self-styled Anti-Christ) had read deeply in biological theory, and that Freud’s psychoanalysis grew out of his interest in how human consciousness could have arisen from simple cells.

Darwinism has become a diversified field. Anya belives the major conflict within the subject today is the debate between Selectionism and Evolutionary Developmentalism or as she calls it, “Evo-Devo, for short.”

“Selectionists,” Anya explained, “assert that species transformation is determined exclusively by genetic factors.” Each generation produces a wide variety of slight mutations, and environmental conditions blindly weed out the least fit. Here, change is directionless and species can adapt into a virtually unlimited diversity of forms. “Evo-Devos, on the other hand, argue that there are processes and forces aside from mere natural selection which direct the evolution along determined paths,” she said. These would be factors such as cultural constraints and sexual selection.

A key non-genetic determining factor would be morphological limitations. Here, a species is not free to evolve in any old direction, but can transform only within the limits of viable anatomical structures. Parts, or organs, are useless if they can’t be coordinated into working wholes, or organisms. Unusually off combinations will result in monsters, the genetic end of the line. “The term which appears everywhere in the literature,” Plutynski says, “is Bauplan, German for blueprint.” The form-follows-function rule underlying Bauhaus architecture and furniture design, might be instructive here. Crudely put, selectionists would argue that if the environment will support it, there’s nothing monstrous at all about the emergence of a species of two-headed birds; nature is free to go there. Evo-Devos, on the other hand, would argue that although such freaks do appear, a new race of this kind will never get off the ground, because a bird with two heads is simply structurally unsound.

Anya begins the semester with the traditional Victorian background readings: William Paley (champion of creationism), Thomas Malthus (over-population specialist) and Charles Lyell (the voice of slow geological change). The course also takes in some of today’s most radical Darwinists. These include philosopher Daniel Dennet (Darwin’s Dangerous Idea), who describes the law of natural selection as a “universal acid” corrosive enough to destroy even the most resilient traditional beliefs. “Richard Dawkins,” Anya says, “uses Darwin to defend a ‘gene’s-eye’ view of the world.” For him, all living forms (including you, DDH) are mere machines which DNA uses to maximize its chances of survival in the widest possible variety of environments. Meanwhile, Richard Lowinten, a veritable Marxist biologist, objects that most Darwinism today is unconsciously determined by bourgeois ideology. “Dick’s a great writer,” Plutynski assures me, “a biologist who does philosophy better than most philosophers.”

These various interpretations of Darwin might all seem threatening, though for different reasons. But what about Darwin himself? The misrepresentation of the actual man is exactly what Plutynski’s class combats. “Darwin was, above all else,” she announces cheerily, “a modest and reasonable man.” This claim might not seem so dangerous. But it echoes words art critic Douglas Crimp used in last month’s SLUG: to change the world you must be modest, understand clearly what is really feasible for you, rather than chase wild impossibilities. For Plutynski, this empowering realism emerges once we recognize, with Darwin’s help, our actual place in the world.

Darwin’s name has been associated with social control. Yet Plutynski insists that none of this was ever Darwin’s intention. Darwin’s modesty lies in his refusal to turn his research projects into social projects. “He was never prescriptive,” she insists, “but simply descriptive. Darwin doesn’t make loud pronouncements.” “In reading him,” Plutynski continues, “you find instead evidence of his intense curiosity, remarkable powers of observation and love of facts.” “After all, she says, “Darwin spent the bulk of his career simply conducting detailed analyses of earthworms, orchids and barnacles”