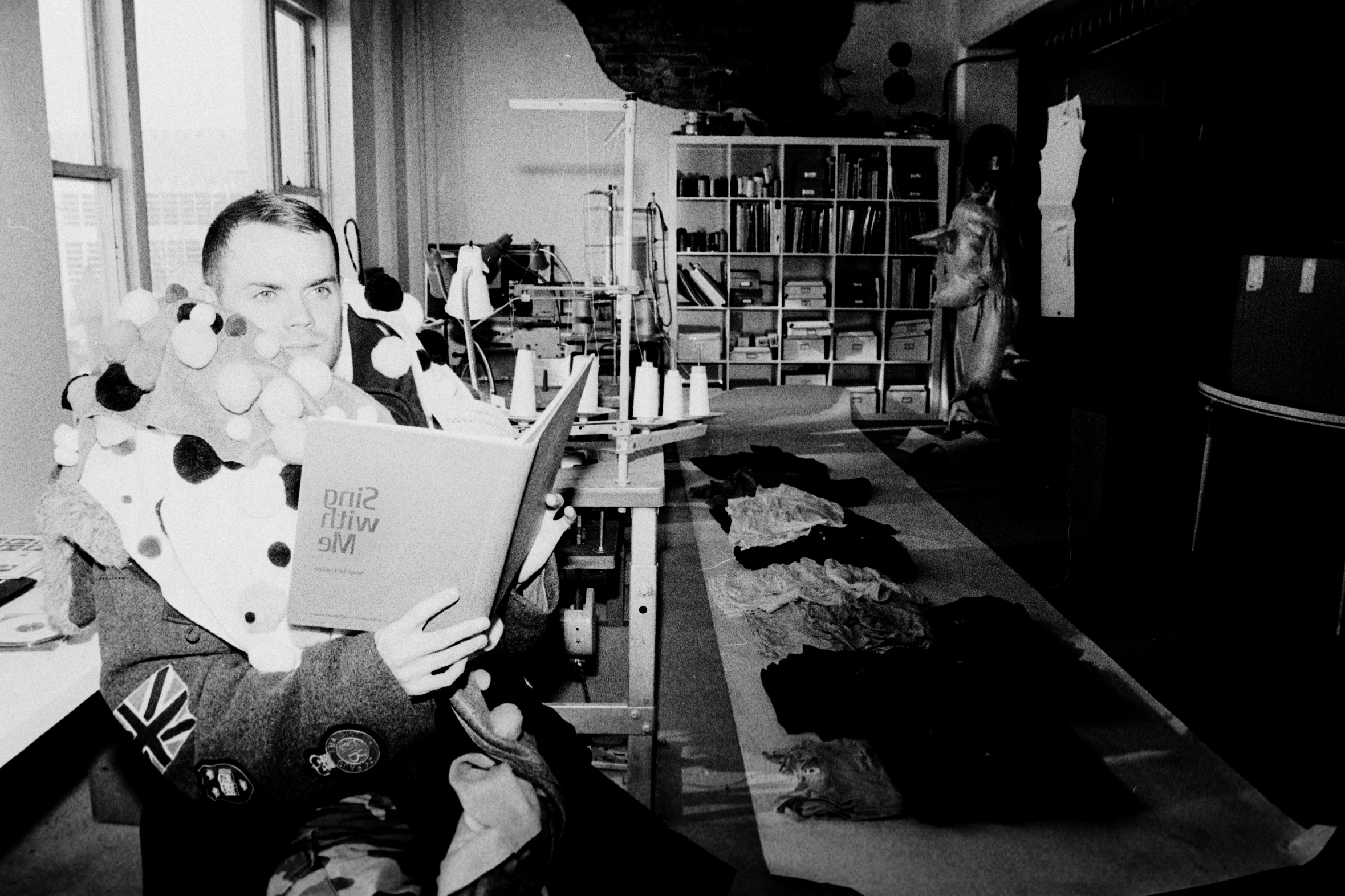 Touch It, Turn It to Gold: Jared Gold Brings Vivacious Couture to SLC

Yet, unlike other outlets of fashion and feel-good hipness, Jared’s scintillating designs will undoubtedly be kinder to your checking account than the Prada sweater you bought last year in New York.

After moving to an empty, spacious room above 100 South, Jared candidly discussed his unique career, his aspirations upon returning to Salt Lake with his business, the virtues and vices of contemporary fashion and the “over-the-top holistic environment” of the Black Chandelier store.

SLUG: Examining your resume that includes extensive music study, it seems that fashion wasn’t always your intended career path. What caused the career change? Was there any sort of epiphany?

SLUG: What was your first fashion success? What got the ball rolling?

JG: I was really obsessed with Andy Warhol in high school. I taught myself how to screenprint and I developed flavored inks. We then made shirts utilizing a transdermal medium; you sweat and drugs go directly into your body. This was 1992, so it was a perfect match for the rave scene. Then we decided to send some shirts to Perry Farrell and he was into it, so we started touring with Lollapalooza. The ironic thing was that they wouldn’t let us sell our shirts because they were selling their own. So we had to learn to make clothing. That’s probably how it started. No one at that point was making rave clothing, so we showed up in San Francisco at the beginning of the tour and sold everything in three hours. We drove back to Idaho with a roll of $100 bills.

(It seemed to me that he was glossing over a step in the process. We can’t all call the lead singer of Jane’s Addiction on a Sunday afternoon to talk about creative T-shirt production. So, how was the connection with Perry Farrell made in the first place?)

JG: Lecturing at art and fashion schools, I always teach people that the only thing between you and everything you want is a fear of somebody or something. All you need to do is overcome that one step. So I said, “Call him; let’s send him some stuff.” I just badgered people and did it.

Be that as it may, why would someone with such interesting successes want to move his company to Utah? Apparently, our little city has something Los Angeles doesn’t. JG: I lived in Los Angeles for eight years with a lot of time spent in New York or London. After traveling, you come home and it’s dirty and loud and some cunt in an SUV with a Frappuccino is trying to run you down. I just missed being able to wake up, go somewhere and have someone be friendly and helpful. You give up a lot leaving LA, but I feel much calmer now. I feel cloistered from outside design influences, which is important because in fashion, you have to do your life’s work every six months. You have to completely reinvent yourself and your work which is easier when you’re not surrounded by the fashion industry at large.

SLUG: In your marketing you present a “mantra of mass personalization.” Do you think that this type of grassroots image creation is possible in our current cultural environment?

JG: All I try to do is make beautiful things. For that to be possible, we have to make money. Yet I want people to feel that what we make helps them identify themselves as an individual. We try to accomplish this by having more forward design elements, dark humor and an aesthetic that isn’t based in sexuality. I’ve never made sexy clothing; I don’t think I know how. But the people I’m reaching out to are sexy in their own ways; their sexiness lies in creativity and intelligence. So, mass personalization allows someone a chance to put on something that is funny without it being stupid. Funny, then, means that I’ve got balls; I’ve got confidence. It is important to me and a lot of other people to say something about the inside on the outside without utilizing a mass-produced, blind, sexual product. We are pounded with imagery and body types. But I am able to make, design and market things. All I expect anyone else to do is find it and find something in themselves. It is really a symbiotic creativity.

At this point, I inadvertently touched upon a “sore spot” for Jared. In the form of a mini fashion industry expose, Jared regretfully stated that he had a designer from Bebe say, “Sorry, we stole a couple of your designs.” Yet he also seems to have come to terms with such plagiarism. He said, “Diesel knocked off from me directly. That’s just how fashion works.”

Considering such cutthroat competition, one would assume that most designers and companies would advertise as much as possible, relying on media exposure for financial success. Yet Black Chandelier doesn’t advertise within the typical fashion publications. What’s the secret?

JG: We make things that are very interesting. Magazines want their photo spreads to look interesting. You never see a pair of basic black slacks in a fashion publication. So hype is created. People want to come to your show; they want to see what you’re going to make next.

SLUG: It seems as if a lot of male designers primarily work with women’s designs. Is this a creative decision or more of a financial consideration?

JG: I’ve made men’s clothing before, but marketing is very difficult. The market for men’s clothing is incredibly traditional. Men don’t change their wardrobes seasonally as much as women. Hence, style and trend move much more slowly through men’s clothing. People always say, “There isn’t any interesting menswear.” But after you make it, reaching them can be challenging.

SLUG: People might say, “Jared, these are idyllic thoughts, but I can’t afford designer things. Hence, I shop at Old Navy.” How then do you respond to the complaint that fashion defies affordability?

JG: In Salt Lake, you really have to shell out cash to get interesting clothes. That’s what’s great at Black Chandelier; it is cheap and well-made. Good design doesn’t cost any more than bad design. We just do it more thoughtfully and creatively than Old Navy. Furthermore, we are going direct from cost to retail, so our prices stay in the range of The Gap.

Jared said his work relies on humor, irony and a play of opposites: “opposites exist for synergy.” For Salt Lake residents, this may become more evident when Jared’s new “well-dressed polygamist garage worker” line becomes available. But for now, we can cash in on a provocative substitute to door-crashers and layaway payments at the electronics superstore.

“I want to see how people react,” Jared finishes. “It is a test to reach out to people who are not exposed to things like this. I have faith that people will be excited.”

Opens Nov. 26, 2004 at Trolley Square. Be sure to stop by Black Chandelier for occasional performances and whimsical entertainment. For more info, call 801.746.3435, and isit www.blackchandelier.com and www.jaredgold.com.