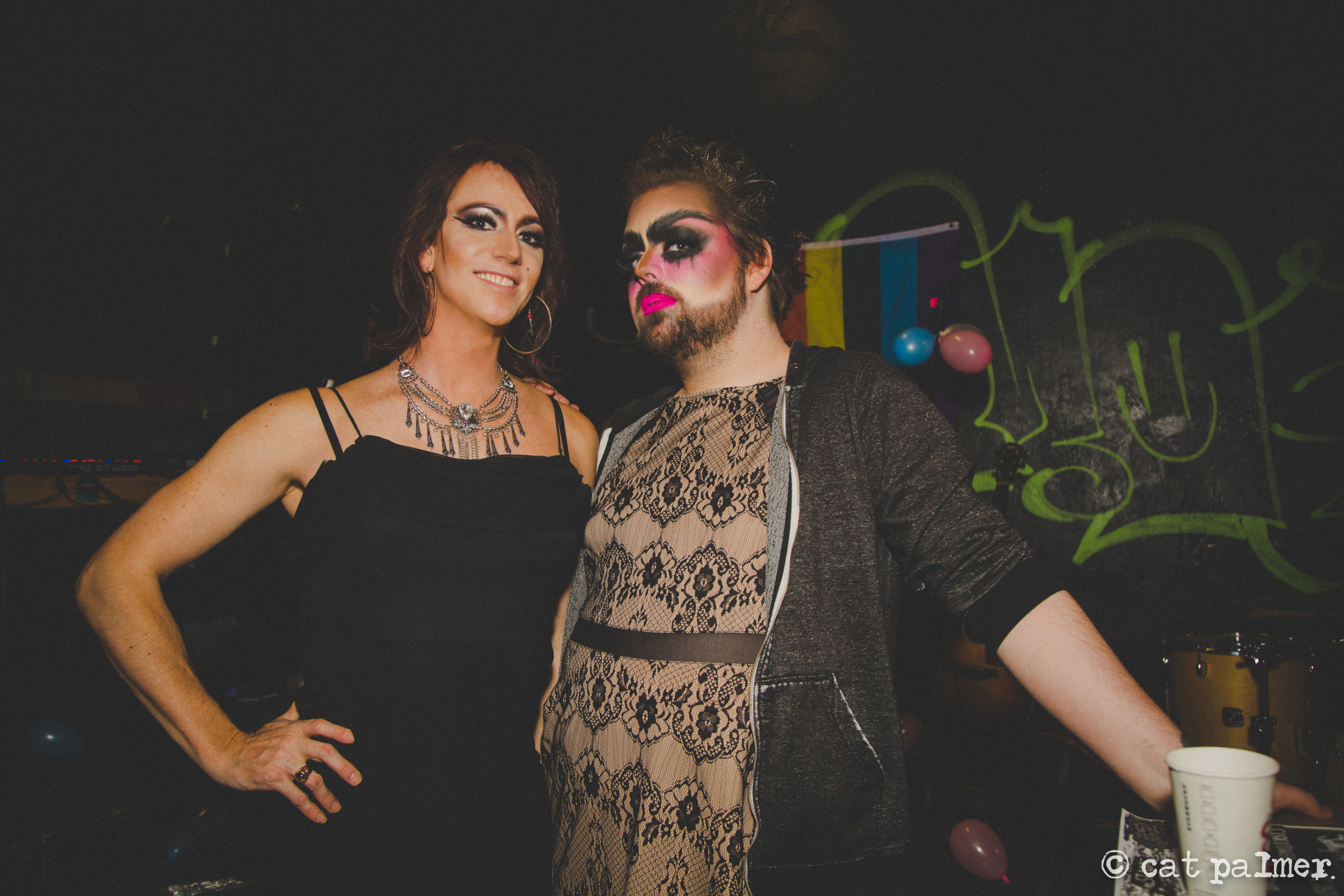 (L–R) Sofia Scott and Wade Leavitt aka The Harlot co-host both 2017 and 2018's Transgiving. Photo courtesy of Cat Palmer.

Transgiving 2018: Celebrating Community And A ‘Buffet of Queer’

Every year, we celebrate that apocryphal time in history when the Native Americans came together with the immigrant Pilgrims for a meal of thanks and communal gratitude. That turned into one of the greatest genocides of our young country’s history, so it should go without saying that it’s a pretty miserable day to remember. We as a nation have struggled to maintain any actual openness and support for outsiders. Salt Lake’s LGBTQ+ community  is trying to reignite the communal flame that once existed somewhere on this earth, with events such as Transgiving. This event is currently in its second year, and caters primarily toward the trans youth who need support and love. Its creators, Sofia Scott and Wade Leavitt, aka The Harlot, hope that their event can provide a safe space where the trans youth of SLC can come together with a chosen family on a day when they may not feel as included by their blood families.

Transgiving was created as a fundraising event to help a friend, Sam Bingham, who needed financial assistance for a much-needed top surgery. After deciding that food was a must-have, it was also suggested that music and performance art be included in the event, thus providing trans and other LGBTQ performers a space for their voice and art to be seen. After Sofia Scott, aka the Rock Princess, reached out to The Harlot to assist with rounding up drag performers to bring their unique magic to the stage, they both decided it would be the perfect place for all ages to spend time together during the holiday. Sofia says, “We really wanted overall to have a place for not only trans performers to have a platform to use their voice, but to make a place for trans youth to come and celebrate that stupid holiday with us and have a place to go.”

Creating a safe space where our trans youth can feel included is crucial in today’s current political climate. Trans people are belittled, attacked and murdered for simply attempting to live their truth. Providing a safe space for them is what our community needs. “The suicide rate for trans youth is really high,” Sofia says. All the facts back up her statement—particularly here in Utah. “Our overall goal is to make that lower. We want to make more trans-oriented functions and events to they can know they’re not alone,” The Harlot chimes in with a quintessential Cancer line, saying, “We can be your family when they’re not available!” I know she means it.

Sofia and Harlot both tell me that this event, while centered on the trans community, is for everyone. Whether you’re trans or simply a trans advocate, they both hope (myself included) that our community can show up, bring a snack or some good energy, and simply encourage those who need encouragement. Sofia says, “It doesn’t even matter if you’re trans or even trans-supportive; just come and educate yourself, and know that there’s more trans people out there than you realize.” She even goes on to say she hopes to bring out lots of kids (the event is all-ages), since you never know when a nugget might need that kind of encouragement during their formative years to help find their own identity.

Transgiving will be showcasing multiple bands and drag performances across two different stages. There will also be spoken word performers, poets and political and trans activists who will be there to share their knowledge. It is Sofia’s intention to have predominantly trans performers gracing the stages—“for the people by the people,” as Harlot so eloquently puts it. “Our main objective,” Harlot says, “is that we do drag performances that are very celebratory of who we are. We want to provide a very loving and positive message, that it’s OK to not be OK. It’s OK to have all these emotions, and we just want to create a general atmosphere of coming together and creating support … It’s a buffet of queer!”

The event will take place at The Beehive Collective on Nov 24 at 2– 8 p.m., and is free of charge. Food will be served immediately, and there are some incredible sponsors catering the event such as Rye, Bambara and Mark of the Bistro. If you would like to sign up and contribute to the potluck, there are signups on the event’s Facebook page, Transgiving 2018, along with other volunteer options if you’re feeling extra charitable this Transgiving season. There will also be donations taken at the event, and all proceeds will go directly back to Transgiving’s sponsor, The Pride Center. So come with an open heart and an open mind, get yourself some good grub and listen to some good-ass rock-and-roll and watch (and tip) your favorite local drag queens. Most importantly, regardless of your identity, get down and show support to the kids, show them that their voices matter. Help our trans youth know they are safe and loved, especially during this holiday season.