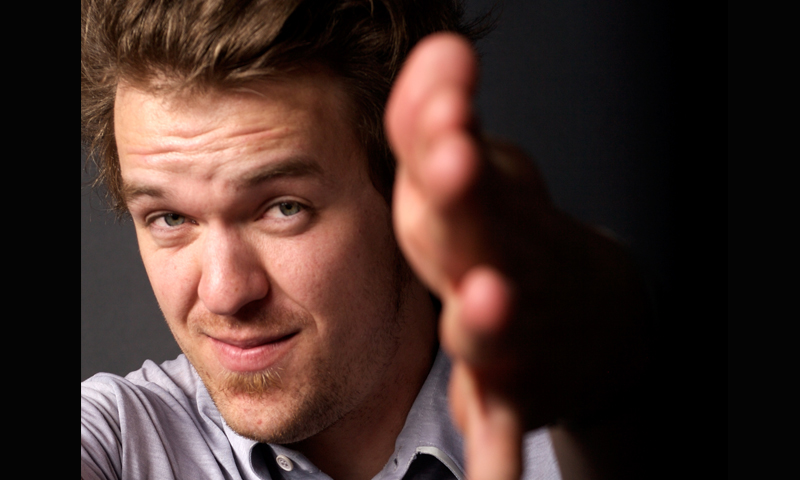 Trent Call’s work looks like something we might see if we put an entire metropolis under a microscope and start taking pictures. Urban texts, unforgettable faces, social debris and a miscellany of textures collide in time with incredibly controlled execution. Call employs everything from oils, spray paints, computers, pencils, acrylic and collage to realize his ideas. Not one to be bound to a typical canvas Call has put his work on everything from floppy disks to furniture. When asked if he thought his work had changed much over the last few years Call said, “I’ve experimented more with my technique and through that my technique has evolved.” What stands out in much of Call’s work are his textures. Whether it is a line drawing laid over a pattern he’s created in the background or his superbly stylized shading to create depth—there always seems to be another layer of detail underneath the last.

Not satisfied with just participating with the local art community, Call has been publishing a local artzine called Swinj since his first show back in 1999. What started out as just a collection of friend’s works has evolved to become a more inclusive chance for local artists to publish their images. Swinj itself has become something of a work of art, as Call explains “I try to make each issue unique.” From the paper type to the page size, each issue of Swinj is varied enough to make it singular, but still maintain the random assortment of images and writing like the original. Unfortunately if you didn’t get a copy when they were available you may be out of luck as each issue of Swinj is produced in a limited quantity.

Call has left his mark all over Salt Lake, his current exhibitions runs through May. Drive by the Don Brady Drive-thru Gallery 24/7 and check out his latest work. He has also done extensive work for SLUG. Call not only nailed SLUG’s typewriter logo, but also did the cover art for Fat Mike and all the art for the Death by Salt II compilation. Until its demise Call was also involved with the Poor Yorick Studios. He not only participated in, but also helped publicize their open studio shows. Besides this Trent has done a myriad of group exhibitions, album artwork and various other projects, won some awards (including an award for his work with on a Kiosk Project on Main Street in 2005) and has even done some teaching to boot.

Trent Call has been making art in Salt Lake his entire life, which gives him the unique perspective of someone who has witnessed the maturation of the Salt Lake art scene. “It’s nothing to complain about, but it could be better. Anything can become better.” Call points to establishments like Nobrow Coffee and Tea, who have come forward and given many emerging talents the opportunity to get their work up on the walls and into the minds of patrons, as champions of the unfolding scene. As a graduate from the University of Utah in 2004 with a BFA Call has indeed run the gauntlet of the Salt Lake art scene and remains a unique and truly local talent.