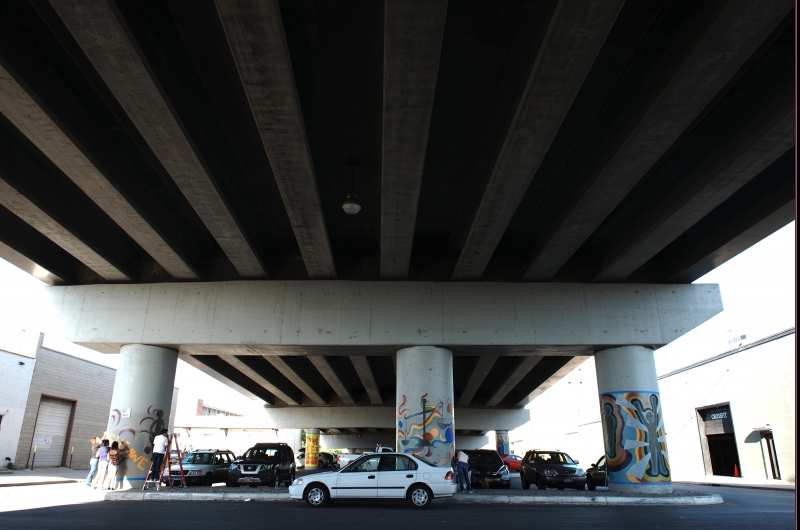 Volunteers have been helping to complete the 9 Pillars murals at 600 S. 600 W. Photo: Michael Portanda

The core values and aspirations of Utah’s homeless youth are now proudly decorating the underpass of 600 South and 600 West in Salt Lake City. What started as Lesly Beck’s graduate thesis while studying at Westminster College has grown into a visual voice for a population often looked past and ignored. Beck has been working with homeless teens since January 2014 in an effort to come up with mural designs for the underpass’ columns—a project appropriately named 9 Pillars. The project has transformed into an awareness movement, and Beck has hopes to continue developing the space into a safe place for homeless teens to be inspired in.

Beck explained that her thesis was supposed to encompass art and community, and how she became enthralled with the stories and projects around the country that revealed how art can strengthen homeless youth programs. These programs help give the youth a sense of identity and hope. “There is such a need to express,” she says. 9 Pillars began as an outreach program with the goal of providing a creative, safe atmosphere for the youth to engage in. Artists went to the shelter to help formulate the themes that the teens wanted to convey. Beck shared the messages of the images they came up with, “The 9 chosen messages are centered around the daily lives of homelessness: Hitting rock bottom, judgment, believing in yourself, community, past vs. future, trust, challenges, recourses and words of our lives.” Once the messages were chosen and the teens and artists compiled the designs, the next step was to get permits and licenses to begin painting.

Beck quickly realized that coordinating with the teens at the location site was a near impossible task. From issues transportation to being unable to meet up with them, it was extremely difficult to get the teenagers to the location to be apart of what they had created. Not all of the hiccups were with out reward—Beck received good news: “I heard that some of the youth I had been working with had gotten jobs, which is great. … I knew from the beginning that their lives were so difficult. They’re in constant survival mode because of all the challenges they have in day-to-day life.” One of the things she noted was the kids’ determination in improving their situations, and to see them achieve was rewarding. Although Beck intended for the project to be a hands-on experience, it ultimately wound up being an awareness mural.

The mural is a visual representation that creates a sense of place for the youth, as well as starts a dialogue about the homeless population. Beck saw that there was a need to be fulfilled, and she believes that the mural helps aid in that. She says, “It provides a permanent way to express their voices, as wells as a permanent reminder to the community of their presence.”

Although Beck’s thesis is now complete, she plans on continuing the development of 9 Pillars. The community has suggested that the underpass be further developed into a small park with benches, so that the youth and other members of the community can enjoy the mural and its messages. I asked if she worried that there would be any issues with the paintings being vandalized, and her response was one I had never considered: “It’s really cool, because, in most cases, taggers will leave this stuff alone—they respect it.” Beck has taken her thesis to a level of extended dedication and commitment with 9 Pillars, and doesn’t plan on leaving it behind after graduating. “I had a really hard time getting my project getting approved by the school—it was a huge undertaking, and there were a couple of times when I almost gave up, and I’m so glad I stuck with it. I’m really proud of it and I’m really happy for the youth and I hope they have ownership of it and are also proud of it,” Beck shared.

Ideas on expanding the space to hold small events and shows are being tossed around, and the progress and future happenings of 9 pillars can be found on the project’s facebook page.