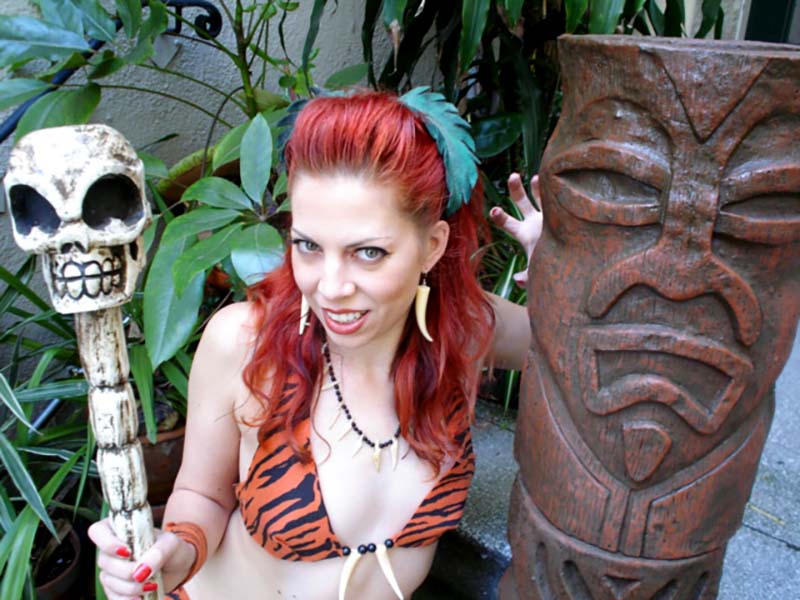 Va Va Va Voom: The Fluffgirls are Coming to Town

When I get a hold of Cecilia Bravo, the founder of The Fluffgirl Burlesque Society, she’s putting the finishing touches on some outfits for their upcoming tour, which will include a stop at our own Burt’s Tiki Lounge on August 7. She sounds damn pleased to be working on costumes, too, like she wouldn’t want to be spending her afternoon any other way.

“What is Salt Lake City famous for? Is that where all the Mormons live?” she asks.

I inform her that yes, the Mormons did indeed start up our fair city some 158 years ago and that yes, they still have their headquarters here.

To this, assuming that she’s assuming that her show is going to be controversial in our town, she informs me that “Down in The Bible Belt, picketers actually created more of an interest in our show.”

I tell her that there probably won’t be much opposition, seeing as how we have a few strip clubs and a couple of sex shops, and then I proceed to tell her about our strip club laws—you know, no nipples, no lap dances, that sort of thing.

Cecilia Bravo started performing around 1997 in Vancouver, BC. The Fluffgirl Burlesque Society began touring in 2001 and relocated to Toronto in 2003. The mission statement on their website reads, “Our goal is to bring back the burlesque circuit … from the different burlesque styling of young strip-teasing starlets to accomplished performers across the globe, a burlesque connoisseur will always be exposed to an innovative show from Fluffgirl!” They incorporate jokes and music as well as scantily clad ladies into their traveling show.

I ask, “How did you first get interested in burlesque?”

“Back in 1997, I was record shopping and I found a series of Las Vegas grind records—there was some art on the back cover that really piqued my interest—pictures of 50s-style burlesque dancers,” she says. “The music is actually really good, but I’ve lost the CDs and apparently they’re all out of print now.”

To this I ask, “So how did you go from being interested in it to starting up your own show?”

“Well, I would put on my records and perform my own burlesque shows for an audience of one (laughs),” she says. “I had a friend over and we were listening to the records and she was looking at the photos and we were like ‘Oh, this is so cool—why don’t people do this anymore?’ Look, you can dress up in these gorgeous costumes with sequined bras and genie outfits. You know, the whole style appealed to me. At the time, I had a lot of vintage lingerie and sequined gowns and I loved to wear the stuff, but the only time I could was—well, my friends had this lounge night and I would go out, get really done up with my hair in a beehive, wearing a prom dress. And then one night my friends were taking me to see The Vandals show and I was like ‘I’m leaving my hair like this.’ Everybody thought I was a freak, but I didn’t care. And then I guess I just wanted to create this atmosphere where I could have an excuse to dress up and, you know—who doesn’t like to see dancing girls?”

We start to talk about dancing girls and strip clubs and I then ask her what she thinks about stripping compared to burlesque.

“Things are changing. There was a time when strip clubs wouldn’t even hire girls with tattoos. But I know that there is still this cookie-cutter image of ‘the stripper’ and it’s just so unappealing. I mean, even though they may look beautiful, they just look like everything else—like, they go to a plastic surgeon and they pick a pair of breasts off the wall … it just doesn’t appeal to me … and I hate spandex. Burlesque costumes are made to fit your body and so much detail goes into it. I mean, I have seen some cool pole activities at strip clubs, but there isn’t much variety, and it’s kind of boring.”

At this point, I tell her about Burt’s and what to expect from a typical crowd there. She sounds pretty stoked on it.

“Like any performer, we feed off the energy of the audience. It makes the atmosphere more electric if the people are into it. It’s interesting to play the same show in so many different cities and venues and to watch how the audience affects it.”

So come one, come all to Burt’s on the first Sabbath in August and show these lovely girls of burlesque just how rowdy Salt Lake City can be. Oh, and bring the whole family.