00:00 / 18:49
Spotify Stitcher
RSS Feed
Share
Link
Embed
Under last Tuesday evening’s brilliant waning moon, the magical emporium on S. Main Street, Crone’s Hollow, opened its doors to the public for “Which Witch is Which,” a panel discussion featuring about a dozen representatives from different realms of Salt Lake’s pagan subculture.

Which Witch is Which: A Pagan Panel at Crone’s Hollow 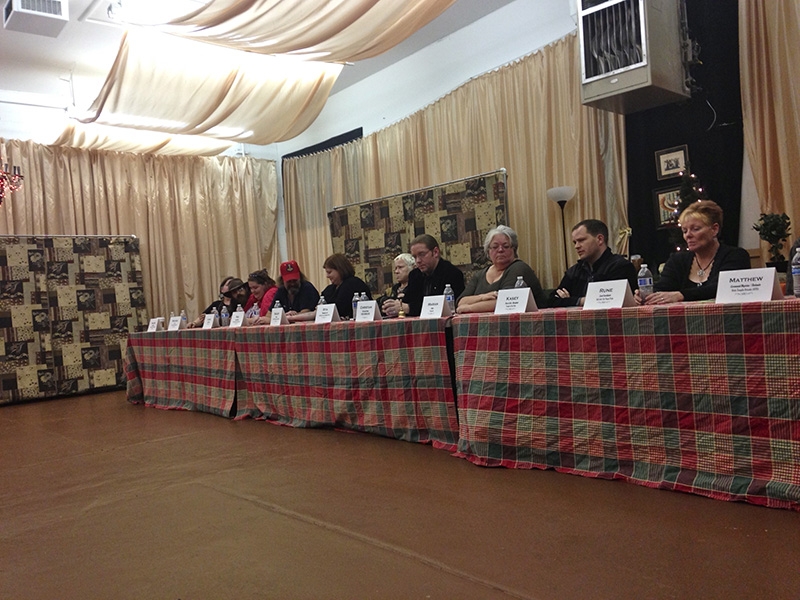 Under last Tuesday evening’s brilliant waning moon, the magical emporium on S. Main Street, Crone’s Hollow, opened its doors to the public for “Which Witch is Which,” a panel discussion featuring about a dozen representatives from different realms of Salt Lake’s pagan subculture. The event, an introduction to the views and practices of witchcraft, Wicca and Druidry, was just in time for Halloween—or Samhain, the witch’s new year.

Crone’s Hollow, according to its website, is “a place that’s not a place, in a time that’s not a time.” It is the “…home of the Crone who shows you how to embrace gray hair, house cats, the art of drinking tea and real magic.” Indeed, the space, which opened in March 2011, defies a precise definition. A visitor enters the building into a warmly lit room where tendrils of incense wrap around crystals, capes, jewelry and decks of colorful cards for sale. Venturing further into the sprawling building leads to a second expansive space featuring a tiny café selling tea and coffee and furnished with inviting couches. To arrive at Roy’s Room, the site designated for the panel, one must pass deeper into the building through another threshold.

Roy’s Room, named after a prominent deceased member of the witchcraft community, was arranged on Tuesday evening to facilitate connections between the pagan world and its curious outsiders. A long table for panelists was draped with a checkered cloth and positioned underneath little black chandeliers wrapped in orange twinkle lights that decorated the ceiling of the 2,500 square foot room. Simple chairs were lined in rows for guests.

A diverse group, the panelists wore anything from flashy capes to baseball caps and each sat behind a nametag designating his or her role within the pagan world. There were, for instance, high priestesses and a priest, a magician and a witchmother, all hailing from different clans or covens. Admittedly, with words like these on display, endless Harry Potter/fantasy literature comparisons were fluttering through my mind—so I asked the panel: Do you embrace these comparisons or shun them? Responses differed from member to member, but the consensus seemed to believe that if fantasy entertainment helps cultivate a person’s interest in witchcraft and promotes genuine inquiry, it’s ultimately beneficial.

Other attendees asked panelists for elaboration on witchcraft vocabulary (such as, “what is necromancy?”) or clarification of beliefs on deeper issues like the afterlife or dreams. Answers were rarely unified amongst the contributors, but still provided a cohesive glimpse into the pagan belief system—a system that seems to value reason, common sense, ritual and spirituality.

I had the opportunity to speak individually with TaMara Gold, hedgewitch and crystal ball seer, who is one of Crone’s Hollows owners. Tired of renting space for rituals, Gold along with co-owner Rita Morgan opened a space where witchcraft ritual and activities could be practiced without inhibition. “What we did is we got our own space where we can be naked and we can have candles and we only have to answer to ourselves,” Gold said.

She also explained to me briefly the complexity of witchcraft. A traditional witchcraft annual cycle, for example, follows six-week periods beginning on October 31 and each one of the year’s eight periods has its own Sabbath and accompanying ritual. Gold recommended that anyone interested in learning more about the basics of witchcraft read Scott Cunningham’s Wicca: A Guide for the Solitary Practitioner or The Complete Idiot’s Guide to Wicca and Witchcraft by Katherine Gleason. They might also take advantage of what Crone’s Hollow offers—tarot card readings, a variety of classes teaching yoga and meditation, and rituals open to the public. Notably, on November 1, Crone’s Hollow will host a Dark Moon Drumming Circle, a monthly event open to the public held during the new moon.

To explore the mysteries of Crone’s Hollow fly your broomstick over to 2470 S. Main Street or check out the website.