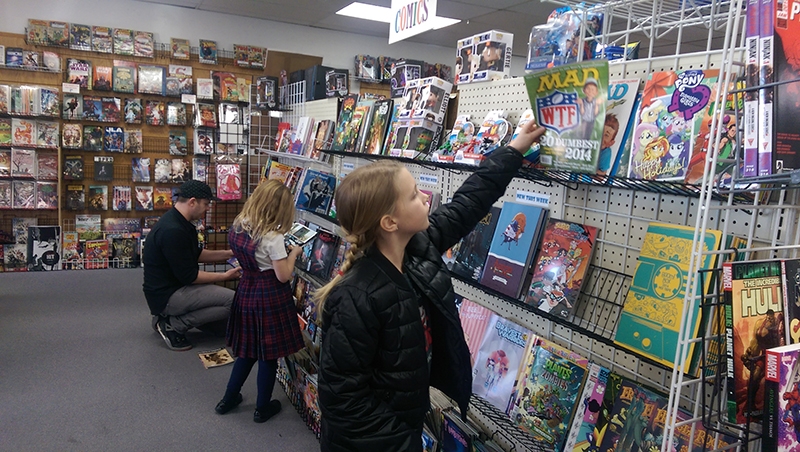 Women In Comics: A Girl Walks Into A Comic Book Store…

The other day, a friend of mine posted a link to an article and wanted to hear feedback from a female perspective. The article was written by a father who, for the first time, takes his seven-year-old daughter to a comic book store. His five-year-old son accompanies them and has no trouble finding books he is interested in. The daughter, however, takes quick notice of the scantily clad women and asks, “Where are the real comics?” The father has an “a-ha” moment. He realizes she notices “sexy” and is upset that he has to have THAT conversation with her, because he shouldn’t—because she’s seven.

It wasn’t an article that pointed out something. It wasn’t an argument. It was an article from a father who actually noticed something that occurs in a girl’s everyday life. Girls are constantly comparing themselves and others. Of course she’s going to notice that the comic books feature curvy, busty women in poses even the most advanced yoga instructor couldn’t do. The situation was a good starting point for the father to help his daughter grow into a secure woman, all while understanding the ridiculousness of the representation of women in comics.

There is a small part in the story, however, that upset me the most. This father went to the store owner, the man who should know his inventory the most, and came back with two options: Hello Kitty and Monster High. What kind of shop is this guy running if he only carries two kid-friendly books? I thought to the store that I frequent, which has a crazy array of books that are suitable for kids and young teens. I know the guy who owns my comic book store would be a wealth of information because he’s helped me find my niche. He’s always recommended books that he thought I would like. This guy could only come up with Hello Kitty?

I commented and ranted on the post my friend had made with this article, getting mad at people who still don’t quite understand the point of feminism, and went on with my day.

My day consisted of hanging out with my eleven-year-old cousin, who is a total geek. She’s the smallest Whovian, a fan of Batman and Deadpool, eager to get into anime and overall pretty dope for an eleven-year-old. She had never been to a comic book store, and I knew a ton of titles I wanted to get her started on to help her grow into a geeky yet strong and confident young woman, so we went to Dr. Volts.

We arrived, and I introduced her to the store owner and two guys who work there. They know me, I know them, so they were awesomely friendly to her. She wandered around, looking at figurines and toys while I talked about the upcoming convention with the guys. I took her over to the books, where she ooh-ed and ahh-ed at books with Harley Quinn on the cover. I immediately thought back to the article I read earlier and noticed just how sexy Harley Quinn was drawn. Don’t get me wrong, I appreciate the female form and think sexy women on covers is cool, but when I see it all the time, I get mad and want something to be done about the way women are represented in comics. I had a pre-teen with me and I didn’t want her thinking that this is just how things are. Women are more than busty caricatures. I was so in-my-head that I immediately suggested we find the Deadpool trade I wanted her to read because at least Deadpool doesn’t have giant bewbs.

I found the Deadpool I wanted for her, and tried to find something in the DC area for her. She likes Teen Titans and Batman, but I am more of a Marvel gal so I had no idea how to navigate the DC books. I asked the guys for a suggestion of a book that my cousin would be into. They. Went. Crazy. Everyone started throwing out suggestions—the owner grabbed a copy of Marvel’s Runaways and explained the premise of it to her. They all decided Batman: Hush was a good book too, and still accessible for an adolescent. I was so blown away by their knowledge and considerations. We left with Deadpool (I put Hush in my hold to purchase another time) and she was stoked. She even told me as we were driving home that she wanted to remember Dr. Volts so that we could go back. Girl, if only you knew how much time I spend there.

The days before this trip, I was running through my comics inventory and kept finding books I wanted her to read. My Captain Marvel trades, the new Ms. Marvel, Ultimate Spider-Man, this little one shot I read recently called In Real Life. My list goes on. I ran through what I remembered was in the youth section at the store, stuff like Adventure Time and My Little Pony. Books still wacky enough that adults could enjoy but totally aimed at kids. I made a point to thank my store owner, telling him that I was so grateful for his considerations for the youngin’s and for being aware of what I’m into and how to steer my cousin in that same direction. That is how a store should be run. That is how you introduce a young girl to comics. While my cousin was not concerned about the representation of women at the time, if she keeps hanging out with me she will be, and I am so glad for that.