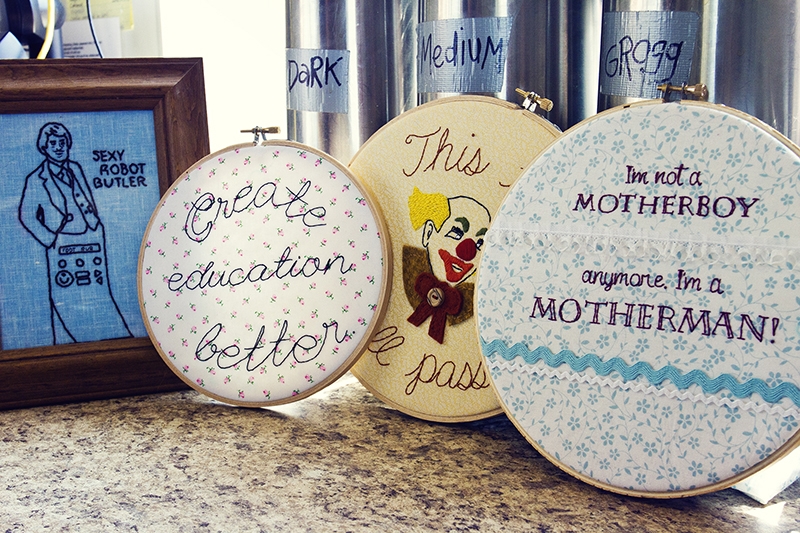 Another year of craft explosion is right around the corner. Four seasons of preparatory functions have led up to a fifth year of artistry, which is sure to be the most successful and fulfilled Craft Lake City DIY Festival yet. Artisans from around the Salt Lake valley will coincide at the Gallivan Center from August 9–10 in a smorgasbord of handmade objects and mind-melting performances. The Craft Lake City DIY Festival, brainchild of SLUG Editor Angela H. Brown, brings out the quirkiest and often most impressive elements of the salty city’s underground DIY culture. This year, I was lucky enough to quiz four distinctly different artisans participating in the event.

First, I chatted with Lars Burrows of Lars Love Letters, a fully recycled set of unique paper and cards. Burrows began making cards about three years ago, and the most impressive aspect of his creative process is his involvement in the entire operation, from making the paper to the final embellishments on the masterpieces. “I love making my own paper for projects—it gives me really unique paper for my cards and prints,” Burrows says. “All of my cards and posters are made from junk mail and scrap paper. I make notebooks from reclaimed ledgers out of day planners and frames for my art from old fences.”
Even with a name like Lars Love Letters, don’t expect the typical greeting card mentality here. This project is full of original and refreshing snippets. “The cards I make are mostly just things I would say: usually nice, if not a little off the wall. All the artwork is my own,” Burrows says. His themes are varying and dependent on the feel you’re trying to go for, from love and friendship to thank yous and get wells. “I’m trying to open things up more and make cards you can give to a friend as well as a girlfriend. Lately, space has been an influence. It quiets the mind and broadens the perspective,” Burrows says.
This is Burrows’ third year at the DIY Fest, and as such, he has a good grasp on its social impact. “This festival is one of my favorites because it’s a great venue for local artists that’s so accessible. After my first year attending, I decided it was time to start creating. I’m sure there’s a lot of people, like me, who are more involved in the DIY and craft community because of it, adding more unique creativity and awesomeness to our culture,” he says.
As a card-making hobbyist, I was extremely impressed with the drive and inventiveness of Burrows’ paper products. Cards have a propensity to be tawdry or cliché when mass produced, but finding a perfect one from a local artist puts the human back into the card, and makes for a genuine and rare gift. For more information, or to purchase wares outside of the festival, go to larsloveletters.com, facebook.com/larsloveletters or etsy.com/shop/larsloveletters.

Next, I conversed with Marie Brian of The Cotton Floozy about her intricate embroidery work. With many years of experience under her belt, Brian has one thing to say that sets her apart from other stitchers, other than her fantastic sense of humor: “My embroidery is more badass than other artists’ embroidery,” Brian says. “I mostly make subversive needlepoint samplers, either finished in wooden hoops or in traditional frames. I have a fear of sewing machines called bobbinphobia, which is in no way a made-up phobia.”

Cotton Floozy is open to requests if you’ve had a perfect sentence or portrait for embroidery mulling around in your brain, just waiting for an outlet. “About half of my needlepoints are custom-made. One of my favorite customers asked me to stitch, ‘Calm your tits. –Buddha.’ At the bottom, I embroidered a picture of a very serene Buddha with man boobs,” Brian says. Along with silly and fun pictures and sayings, the style of fabrics used is humble. “The majority of the fabrics I use come from my mother’s craft room closet. I have found some wonderful, vintage fabrics while hand-trawling through her stash. Fabrics that are weird or fugly are my favorite,” Brian says.
As another third-year veteran, Brian has a plan and a lot to say about this year’s DIY Festival. “I am considered to be a ‘CLC Alum,’ which I take very seriously. I plan on wearing full academic regalia to this year’s [DIY Fest],” she says, teasing. “My favorite thing about CLC is that it celebrates counterculture. The artists, crafters and DIYers challenge the social norms of Utah. Everywhere you look at CLC, there are crafts and artwork promoting diversity, peace and marriage equality. The most creative, talented and funny people share their work at Craft Lake City.” Check out Brian’s embroidered sense of humor at the festival, or go to www.cottonfloozy.com or facebook.com/thecottonfloozy.
Nick Price of Bolt Lighting creates a steampunk-style line of desk lamps. Bolt Lighting has been up and running since January, but Price has been inspired by light fixtures from a young age with help from his father. More recently, Price was drawn toward industrial interior design through an experience with a trade-show technician. “My journey started when a lovely woman [CLC artisan Meg Frampton] traveling to New York for a trade show asked me to build her a display for her jewelry for sale,” says Price. “Her jewelry is made of various metals, the majority of which are shaped into robot characters, so this is where the industrial flare came in.”
Even with a high demand for exact styles of fixtures, Price still makes an effort to use recycled materials. “A small percentage of my supplies are from a recycled source. In the beginning, I was using all recycled pipe, but as the demand for specific fixtures grew, so did the need for exact parts instead of whatever recycled pieces I could dig up,” Price says.
Bolt Lighting focuses on small-scale lamps usually meant for a desk, featuring vintage, Edison-style bulbs. “My current fixtures are all desk/table lamps. The largest is the Three Amigos, which is 20 inches tall and fit with three vintage tube lights,” Price says.
This is Price’s first year at the DIY Fest, and he is happy to be participating this season. His outside perspective on CLC gives an interesting viewpoint: “Salt Lake seems like a pretty crafty place, maybe because of all those scrap-booking Mormon mothers. When people are creating unique things that intrigue and inspire others, that’s always a benefit to our culture!” Price says. To read more or purchase products online, go to boltlightingdesign.com or facebook.com/boltlightingdesign.

Last, I spoke with the aforementioned Meg Frampton of Chandler the Robot, a lineup of metal jewelry focusing mainly on robot designs. Frampton has been working with metal jewelry for three years, after being inspired by a random class of female metal workers she walked into. It seems that Frampton’s entire experience leading up to her current robot jewelry project has been a series of wonderful freak chances. “I wish I could say I had some sort of elaborate plan, but the reality is, I saw a similar idea in a magazine and I recreated my own version. I’ve always enjoyed art that was a little off the cuff, and I wanted to make something unique,” she says. “I suppose since the medium I was using was metal, it seemed kind of natural to me to create a little robot guy.”

Chandler the Robot is customizable when it comes to the type of metal she uses. “When I first started out as a jeweler, I wanted to create crazy-looking engagement rings using white gold and platinum. I very quickly realized how expensive those kinds of materials are, and I didn’t have the cash handy in the beginning. So, that’s why I chose to work with aluminum, nickel and real copper. Copper is great because I can change that raw, bright copper into any shade I want using a sulpherizing technique,” Frampton says.
Currently, Frampton is working on a new line of robot-style jewelry with a new medium. “I’m working on a new creature series out of polymer clay. They are supposed to be robots, but my boyfriend [CLC artisan Nick Price] commented that they didn’t look much like robots based on how I did the detail work,” Frampton says.
This season will be Frampton’s first experience as a vendor at the Craft Lake City DIY Festival. As a customer of the festival for a few years, she has a good outlook on the entire experience: “I think Craft Lake is fantastic for the community! It gives artists a chance to step out of their studios and interact with people and get some great feedback. It makes the city more connected on a deeper level, and the art community in SLC is fantastic,” she says. To find Frampton’s work on the net, go to chandlertherobot.com.
After speaking with four interesting artisans who will be present at the DIY Festival this year, I am feverish with anticipation to see what else the 2013 festival has in store. From handmade paper and embroidered axioms, to metallic lamps and jewelry, CLC is a breeding ground for incredible artistry and imaginative collaboration. “Craft” means anything made with your hands, so even if you aren’t participating this year, stroll by and check it out at the Gallivan on Friday, Aug. 9 from 5–10 p.m. and Sat., Aug. 10 from noon–10 p.m. You might just find yourself inspired like these crafters and surprised at how far your crafty inspiration can take you. At the very least, you can find some early Christmas presents for a friend and revel at the expansive DIY counterculture in Salt Lake.