The San Francisco-based Zerofriends creative collective has become known for their creepy art, largely inspired by classic horror movies. A friend recently asked Zerofriends artist Alex Pardee where the darkness of his art comes from. “I honestly don’t know—I never know how to answer that question. This is just something that has always been in me,” he says. It turns out that Pardee and Dave Correia just like scary shit. 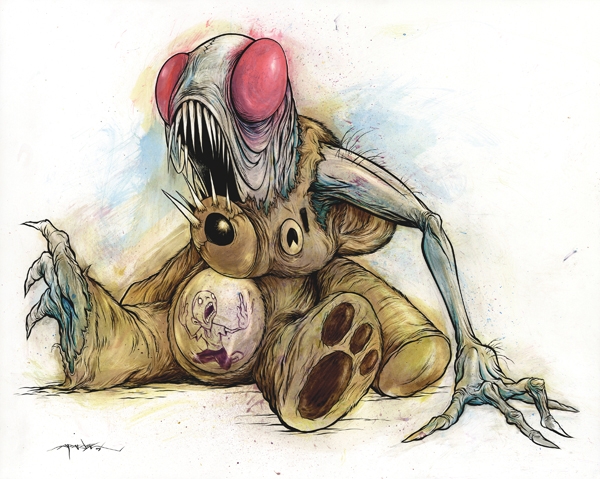 The San Francisco-based Zerofriends creative collective has become known for their creepy art, largely inspired by classic horror movies. Alex Pardee’s signature style incorporates unsettlingly elongated and contorted figures, often contrasted by splotches of bright colors. Dave Correia’s ink work is stark and highly detailed, while his paintings present a horror aesthetic, sometimes with a disarming absurdity. A friend recently asked Pardee where the darkness of his art comes from. “I honestly don’t know—I never know how to answer that question. This is just something that has always been in me,” Pardee says. It turns out that Pardee and Correia just like scary shit.

Pardee and Correia have similarly humble beginnings as artists: influenced by the media they were consuming, and interpreting it in their own way. “I’ve been doing art as long as I can remember. I was just always drawing. I spent all of my free time reading comics, playing video games and drawing whenever I could,” says Correia. “I’ve always been into scary movies and horror films, and that’s where most of my inspiration comes from, the darker, creepier stuff.” Pardee grew up wanting to be a comic book artist or an animator for Warner Bros., but he started taking his art more seriously out of necessity. “When I was 14, I got diagnosed with anxiety disorder and panic disorder and depression, so I actually went into a mental hospital for a while. I hated it, but during that time I was encouraged to do different activities to take my mind off of things,” he says. “The one thing that worked for me was sitting down and drawing. The act of doing it made me feel better … So I’ve just kept doing it.”

Around this same time, Pardee was becoming bored of the superhero comics that had initially inspired him. When he discovered Image Comics series The Maxx (“It was disguised as a superhero comic, but it wasn’t a superhero comic at all,” he says), it changed his outlook and set the trajectory for his artistic career. Pardee began submitting his art to various comic companies, but it was always rejected. At this point, Pardee was a headstrong teenager, and rather than accepting the rejection, he adopted a “fuck everybody” viewpoint and started self-publishing his own comics. “I started this company just to print my books, and from there I thought that I needed to create some T-shirts to promote the comics. In order to promote the T-shirts, I had to learn to make a website, so it all snowballed into this self-business that I wasn’t aware that I had started when I did,” he says.

When Pardee became the art director for The Used in the mid-2000s, he found himself spending much more time in Utah, where the Zerofriends collective already existed. CW Mihlberger, Caleb Barney, Darren Scott and Quinn Allman brought different things to the collective table, but it wasn’t until they began using the infrastructure that Pardee had created to promote his own artwork that Zerofriends became a brand. The group has changed throughout the years and now consists of artists Pardee and Correia, Rob Neuman, who handles the group’s warehouse management, and Scott, who handles the business end of things. “People come and go, but they never really go. We just expand parallel to each other,” Pardee says.

Zerofriends have always been about making their art accessible, producing an unlimited amount of prints after the limited initial run of a larger-size print has sold out. “I’ve gotten some flack for it, but I came from a place where I didn’t have a lot of alternate art available to me for cheap, so once you start limiting stuff, it ups the cost and it ups the retail price of it. All of a sudden, less people can afford it and there’s less of it out there,” Pardee says. This same notion of accessibility led Pardee and Correia to embark on a cross-country trip in 2009 for a project called Sketch 4 Sketch, where they would set up shop at comic stores, toy stores and art galleries, and trade sketches with whomever showed up and was willing to draw with them. “We thought we’d spend an hour and a half at each location, tops, and maybe 10 people would come by, but at the very first stop in Sacramento, we were there for six-and-a-half hours just drawing for people,” Correia says. “It was a really cool thing. We made about 15 stops to and from New York.” One of these stops was at Blonde Grizzly, owned by their friend, Barney, then located in a kiosk at the Layton Hills Mall. It was the first time that Pardee and Correia had been in Utah together, and both of them are excited to come back to share their work—and possibly catch some Sundance movies while they’re in town.

Pardee plans on creating a few new pieces for the show in Salt Lake, while Correia will be displaying the originals of the pieces collected in his series of art books (he’ll be displaying all new art in a show at Upper Playground in Portland next August). Blonde Grizzly will be hosting a reception for Pardee and Correia on Jan. 20 at 6 p.m.