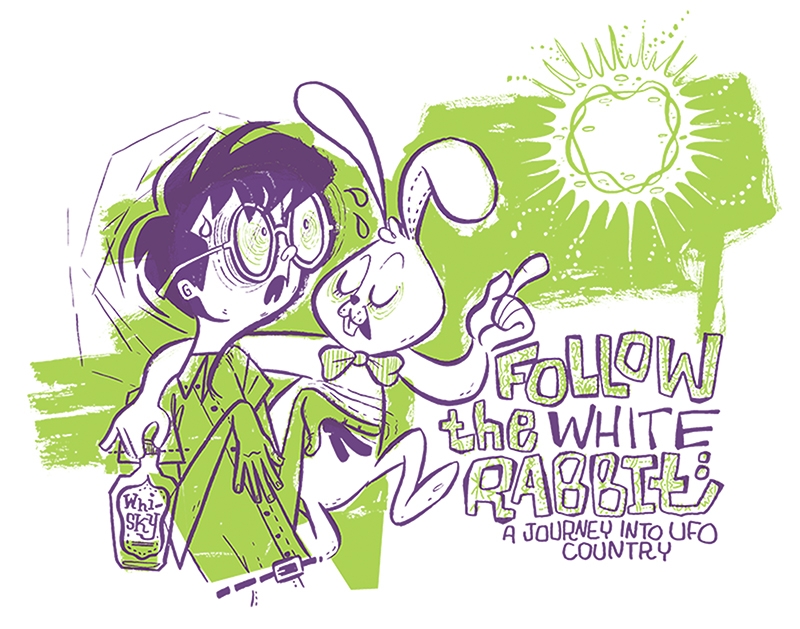 “'How does that explain what I saw?' Serawop says."

Follow the White Rabbit: A Journey Into UFO Country


Before dawn on the morning of Feb. 12, 2012, security guard Corey Serawop was halfway through a graveyard shift at a Fort Duchesne alcohol abuse treatment center when the power went out. Serawop saw red-and-blue flashing lights outside the building. Assuming the police had arrived in relation to the power outage, he went outside to meet them. Instead of a police cruiser, Serawop saw something unimaginable—something he had only seen in movies.

Fort Duchesne is a town on the Uintah and Ouray Ute Reservation in Northeastern Utah. The nearby Sherman Ranch, eventually dubbed Skinwalker Ranch, was the purported location of numerous paranormal sightings, peaking in the 1990s. Disembodied, flying spotlights, sentient mists, indestructible wolves, Bigfoot, multidimensional portals, cattle mutilation and skinwalkers are among the things reported to be seen in the area. This caught the attention of Robert Bigelow, founder of NIDSci, (the National Institute for Discovery Sciences) and Bigelow Aerospace. In 1996, Bigelow bought the Sherman Ranch and NIDSci began investigations there.

In the interest of hearing Serawop’s first-person account of his experiences, I planned an overnight trip to Fort Duchesne. After interviewing Serawop, I intended to stay up all night, waiting for something paranormal to happen. On Wednesday, Sept. 10, I left Salt Lake City in search of insight. What follows is my log of the trip.

Wednesday, Sept. 10, 2014
5:09 p.m. – Somewhere on Highway 40. Apparently, the only CD I brought is Surrealistic Pillow by Jefferson Airplane—on repeat since I left. There are multiple versions of “Somebody to Love” and “White Rabbit.” I have heard “White Rabbit,” like, six times so far. I’ll see how long I can handle this.

7:05 p.m. – I just met up with Corey Serawop in the parking lot at the entrance of Bottle Hollow. He’s a large, personable man, 37 years old and of Ute descent. Sitting in his security patrol truck (he is a security guard for the Ute tribal office), I ask him what happened on that morning in 2012. “I witnessed a UFO, up close,” he says. It was a cloudy morning, still before dawn, and it was snowing. The power went out at the rehab facility at which he worked. He saw red-and-blue flashing lights outside the building, then he and a coworker went outside to investigate. They saw a large object hovering above their building, and the flashing red-and-blue lights changed to solid red. “I had to put my hand up to cover the brightness of it,” Serawop says. “It wasn’t a big ship—probably the size of a small plane.” He says it must have been 25 to 30 feet up in the air, and it was circular. “There was something in my head that was telling me we needed to get back inside the building, which is odd,” he says. “After we started walking back into the building, it started moving south,” he says. Serawop and his coworker went inside, locked up, and checked on the treatment center clients. Serawop realized that while he was outside, a half hour had passed. “After that, this big flash of light just hit—you could see everything like it was day … It was really bright white, and [then] it was gone,” Serawop says. When he got home from work, Serawop’s wife interviewed him about what he’d seen. He posted the video interview to YouTube, and started a Facebook group called Fort Duchesne UFO. Three months after the incident, which he described in detail in his security report, Serawop was let go from his job.

7:52 p.m. – Getting dark. Still sitting in the truck. Serawop showed me a photo that his friend took two weeks after the incident in 2012. Apparently it’s a portal in the sky over the Bottle Hollow Lake/Reservoir. He says people saw helicopters chase a UFO near here and it dove into the lake to evade pursuit. The photo shows a convoluted, blue-white ring in the night sky with a dark center. It sure looks like a portal. We drive to the rehab facility where Serawop saw the UFO. He said it was about as big as the building or smaller, so about 30 or 40 feet across. Headed south, we pass an electrical substation—the one that local authorities said had failed and caused the incident in 2012. It’s at least a mile away from the rehab facility. “How does that explain what I saw?” Serawop says.

8:39 p.m. – Serawop says people in this area sometimes hear scratching at their doors. Some see strangely behaving lights in the sky, like the one several people reported seeing during the Ute powwow on July 4 of this year. I ask him about Skinwalker Ranch—he knows all about it. We talk about skinwalkers—even though they’re part of Diné (Navajo) lore, Serawop is familiar with the concept of people using dark magic to change their form for evil uses. He shows me where his friend saw a shadow person at one of the tribal government buildings. He points out the road leading to Skinwalker Ranch.

We circumnavigate the ranch, stopping on the south end to look at the gigantic, orange moon beginning to rise. We spend a while standing beside the truck, looking upward. Serawop points out an orange light in the distance, above the Uinta Mountains. The light fades in and out, starts moving laterally to the east, then disappears. It’s out of the ordinary, but not unexplainable. On the way back to the parking lot, Serawop tells me about a time a few years ago, on this same road just west of the ranch, when a floating, blue orb followed his brother’s car. As the orb got closer, his car shut down. The orb disappeared but the car wouldn’t start. His brother left the car and walked to a nearby friend’s house, where he let his fear subside before going back for the car, which started fine afterward.

9:24 p.m. – Standing in the parking lot again, Serawop and I see a bright-white light appear in the sky overhead. It moves slightly north, flashes red and blue, and fades to nothing. He says that he often sees things like this, but many times, the light will suddenly shoot straight up before disappearing. Serawop bids me farewell and I’m on my own.

11:08 p.m. – I sat in the parking lot for a while after Serawop left, but I got a weird feeling, so I started driving around. I don’t usually get feelings just driving around. I’m going to check out Skinwalker Ranch.

11:22 p.m. – Stopped on the side of the road just west of the ranch, watching. On the way here, something dashed across the road in front of my car and I almost hit it. It was a white rabbit. I’m fucking terrified. I don’t know why—this sort of thing doesn’t usually scare me. Trucks kept following me and that makes me nervous, too. I’m afraid to get out of the car. Good thing I brought whiskey. I’ve checked the door locks twice.

11:30 p.m. – Getting more freaked out. Same spot. Got out of the car to get the crowbar out of the trunk and hear weird sounds just southwest of here. There are three mosquitoes in my car. I keep thinking I hear voices and footsteps in the gravel behind my car. I think I’m going crazy.

Thursday, Sept. 11, 2014
12:08 a.m. – When I step outside the car, the sound to the southwest sounds like a helicopter starting, revving up like a Harley Davidson, idling, stalling and starting over again. It’s about a 10-second cycle, but it’s irregular. It sounds like someone kick-starting a helicopter. The surrounding area is flat. The sound seems to be coming from nearby, almost overhead, but there are no lights at all. It could be an oil-drilling operation. That is common in this area, but it sounds like it is right here and I don’t see anything. Stood listening for a half hour.

2:33 a.m. – I spent the last two hours driving around, investigating the sound and then standing on a remote stretch of road in the middle of freaking nowhere, just looking around. On the way back to the parking lot, I decided to try driving closer to the ranch’s entrance on the north side, which Serawop pointed out earlier. I found the road and headed west. As I neared the entrance at the end of the long dirt road, I saw the concrete barricades illuminated in my headlights. I was suddenly filled with complete dread, and immediately overhead, a bright-white light shot above me, travelling the same trajectory as my car, and disappeared. That’s it, back to Salt Lake.

3:01 a.m. – I found my way back to Highway 40 and headed west to go home. I felt really sleepy, though, so I’m back at the Bottle Hollow parking lot. I’m going to take a nap before I leave so I don’t careen off the road and die. I park facing west, recline my seat, and bundle up with my knife in my lap.

5:20 a.m. – I just awoke suddenly to a bright-white light shining into my car. My heart felt like it stopped. The bright-white light of a tribal police cruiser spotlight shined in my face as it drove quickly past my car. Oh my god, I thought, I’ve had enough—it’s time to go.

6:29 a.m. – Stopped at a rest area off of Highway 40. I’m sitting on a bench overlooking Starvation Reservoir, drinking “Mountain Roast” gas station coffee, facing east toward Fort Duchesne as the pink beginning of daybreak begins to push away the darkness of the previous night. I don’t know what it is that’s happening in Fort Duchesne. There is definitely something strange going on there, though.

10:50 a.m. – I got home at 8:30 a.m. and slept until now. I got undressed to take a shower, and I have a large, irregular rash covering my right knee and thigh. On the middle and ring fingers of my left hand, where both fingertips touch each other, my skin has an orange discoloration. In the shower, I scrub it vigorously, but my skin is still orange. I haven’t touched anything that could have stained or irritated my skin.

Whatever I experienced in Fort Duchesne—or whatever I imagined I was experiencing—was ultimately inconclusive. I mostly spent the night alternating between driving around and working myself into a terrified frenzy. I saw and heard some things that I couldn’t explain, but I wouldn’t consider any of those things to be evidence of paranormal activity. It’s hard to ignore Serawop’s stories, though. The orange on my fingers faded within a few hours, and the rash disappeared after a week, but those stories stayed with me. I’m beginning to think that Serawop is right—there must be something out there.