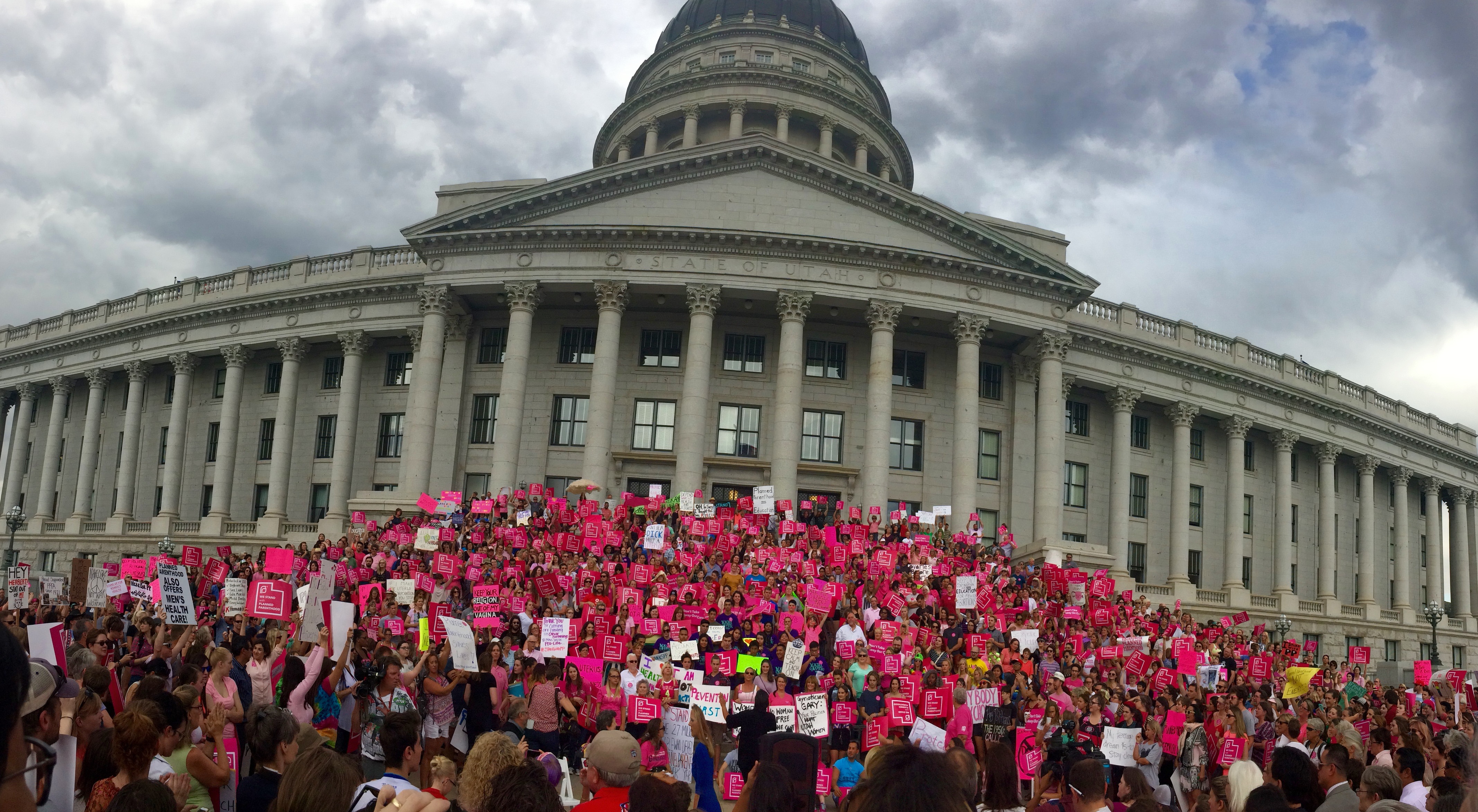 This is not the actual caption for this image. On Tuesday, Aug. 24, Planned Parenthood advocates and supporters met at the capitol for an official press conference and rally as a response to Governor Gary Herbert, who announced on Aug. 14 that he intended to issue an executive order which would ban Planned Parenthood from receiving any funding from the state. By 6 p.m., over 4,000 pro-choice Utah residents had congregated to the stairs of the Capitol, which had become a sea of pink, the color representing the support of Planned Parenthood. The event organizers handed out signs to those who did not bring their own with the quote “We stand with Planned Parenthood.” For those who did bring personal signs bore clever, but mostly serious messages such as: “Punishment without proof equals tyranny,” “Stop the war on women,” and “If I make my uterus a corporation, will you stop regulating it?”

During the rally, there were a number of important speakers, each sharing their personal message to the crowd and, in the end, asking for continued growth in support of free healthcare and sex education. Some of these speakers were peer sex educators who spoke outwardly about sexual assault and how Planned Parenthood offers aid for those who have been sexually offended or have had sexual trauma of any type. The motto that permeated with this particular group was “I wasn’t afraid to ask questions,” something that most of Utah’s youth seems to have trouble with, considering that Utah has one of the highest teen pregnancy rates in the United States. Many of the pro-choice advocates’ signs claimed that the governor has chosen politics over women’s health, many of these women being teenagers and/or victims of trauma.

Though a few pro-life protestors had a small gathering of their own (both in front of Planned Parenthood and at the press conference itself), their numbers were nothing in comparison to the thousands in support of affordable healthcare and education. Many of the pro-life protesters were surprised to hear the actual facts about Planned Parenthood’s services, and that only 3 percent goes toward abortions, which are indeed funded by the patient, not the government.

Utah House Representative Angela Romero was another speaker who shared her story. “It is important to get involved with the political process,” she says, “and vote!” Her story involved going to Planned Parenthood because, at the time, she had no insurance or information regarding birth control and sexual health. Planned Parenthood offered her affordable healthcare and easy access to the necessary information she needed to make adult decisions about her sexual life. State Senator Jim Dabakis made a passionate speech commenting on the tactics our current government is using in order to move forward in the elections. “Planned Parenthood will never throw your life under the bus for political gain,” he says.

As the designated speakers finished, the mic was opened up to members of the crowd who wanted to share a part of their story. This was the most beautiful moment: seeing so many young people (women, men, trans and genderqueer youth, and others) line up and take the considerably huge, brave leap into sharing their story in front of 4,000 people. Some stories were tragic; others were humorous. Regardless the nature of the speech, each one was powerful, impactful and, though short, brought together the spirit and purpose of the rally. Members of the crowd were also invited to write a personal letter to Governor Herbert at the south end of the capitol to ensure his mail would be crowded with letters demanding that the state continue funding the services of Planned Parenthood.

Whether it be STD testing, mammograms, cancer screenings, family planning, sexual education information, affordable birth control or—in very rare cases—abortion, the Planned Parenthood in Utah will always be here for its residents, to provide the healthcare they need, to educate those who seek it, and to help those who feel as though there is nowhere else to turn. This is one organization the state cannot afford to lose.