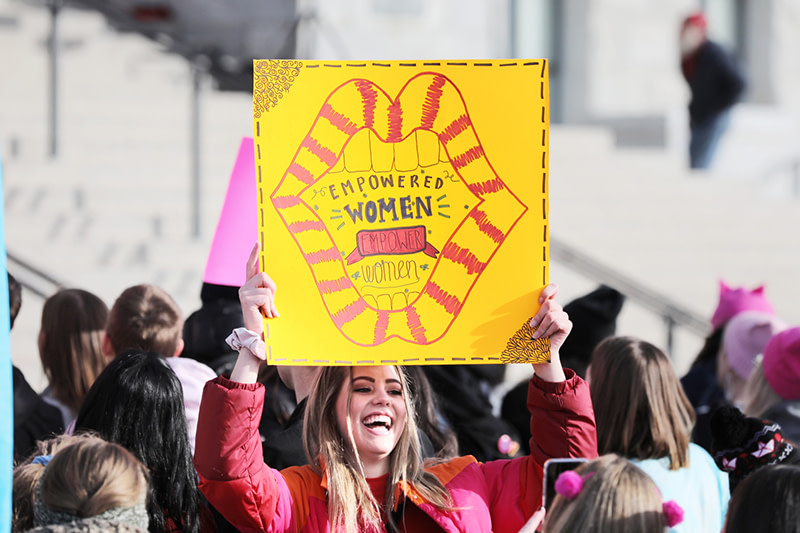 The Present is Female: The 2020 Womxn’s March

If you work or live Downtown, you may have heard some opinionated words emanating through the streets on Saturday, Jan. 18. The shouts of a few hundred Utahns were honoring an annually held event: The Womxn’s March. This nationally occurring demonstration saw people all over the country raising their voices against ongoing injustices against women, and Salt Lake was no different. Organized by the Salt Lake City Womxn’s March Committee—a student-led group unaffiliated with the national organization—the theme of the 2020 march was missing and murdered indigenous women. Several organizations worked with the committee to create a powerful display of dissent including PANDOS and Missing and Murdered Indigenous Women(MMIW).

It was a crisp morning when the crowd gathered at Washington Square Park in Downtown Salt Lake City. The energetic collection of activists were eager to begin the day’s events. After a brief prayer from a member of MMIW, we began our journey to the State Capit0l with steeled determination. Members of the Native American community led marchers with an eye-catching banner reading “In Memory of Our Stolen Sisters.” They carried posters of Kailey Rain, a 12-year-old Native American girl who was killed five years ago and has yet to receive justice. This new face of the Womxn’s March is an indication of the ongoing push toward inclusivity in local activism and feminism—a movement that has been so historically whitewashed.

Following this group was a wave of proactive protesters, their colorful and clever posters conveying messages of anger, hope and solidarity. Some shouted, some sang and others were simply present. I could smell a hint of burning sage as I echoed the powerful words shouted through megaphones, and I was pleased to notice the diversity of the crowd. Individuals both older and younger, men and women, and even a few dogs joined the lively demonstration. The Salt Lake City Womxn’s March Committee prides itself on being an all-encompassing organization that advocates for the rights of women of color, queer women, immigrant women and disabled women—an ambition realized through this gathering of various religions, ethnicities, sexualities and abilities. A feeling of camaraderie swept over me as I moved with this body of people, all of us marching toward the future we were determined to create.

“HEY HEY, HO HO, THE PATRIARCHY HAS GOT TO GO”

As we ascended the final push to the Capital, I felt a sense of urgency. The cold white building looming over us was a reminder of the many systems in desperate need of revision. In this time of uncertainty marked by the impending impeachment trials, the march seemed to carry extra weight. I reflected on the first National Women’s March that took place in 2017: a powerful response to Trump’s inauguration. It would seem we have come full circle—now more than ever we must make our voices heard.

Nearing the end of our march, the group settled at the foot of the Capital where community leaders gave impactful speeches. Members of the Salt Lake City Womxn’s March Committee were adamant about ADA services available to the crowd which included accessible seating and ASL interpreters, another marked improvement from national marches where disability services are often absent.

Yolanda Fransisco-Nez from Restoring Ancestral Winds began with a prayer, filling the atmosphere with spiritual cadence. The first speaker was MMIW’s Michelle Brown who gave a passionate speech spotlighting violence against indigenous women, a group that is killed at 10 times the national average. Shedding light on the unfair treatment of these cases and the inconsistencies in Utah’s laws, she ends her speech by asking those with women in their lives: “Listen to her, protect her, respect her. She is our future.” Following her was the Women’s Issues Director of the Utah Prisoner Advocate Network: Brittnee Webb, who spoke about a group she calls “The Forgotten.” These mothers, sisters and daughters are the incarcerated women in Utah’s prisons and jails. She shared harrowing stories of the treatment of these women, and urged the crowd to vote for leaders who will make changes for this group that is so often left out of the women’s rights conversation.

“Now more than ever we must make our voices heard.”

Lex Scott from Black Lives Matter Utah spoke powerful words to the group, highlighting the importance of intersectionality and, quite frankly, telling white feminists to pass the goddamn mic. It was refreshing to hear white activists being called out like this, myself included. It was a reminder of all the work still needed to pave the way towards a truly equal society. She discussed the significance of racist systems like the school-to-prison pipeline and police brutality, bringing the crowd to a crescendo of passion.

Student activists Jenessa Jimoh and Neve Lahy led the second half of speeches with messages of acceptance and action, offering the crowd an inspiring vision of what future leaders will accomplish. Ermiya Fanaeian, co-founder of March For Our Lives Utah and appointed member of the Mayor’s Gun Violence Prevention Commission, spoke on the unfair treatment of immigrants and once again highlights the importance of voting.

The event ended with words from Lisa Bullcreek, a member of the Goshute tribe and friend of Kailey Rain’s family. She thanks the crowd for their support and shares memories of the young girl who was taken long before her time. After a few closing words, the crowd gave its final cheers of support for the bold speakers and resilient Native American community.

Feeling solemn, yet galvanized, I left with Lex Scott’s words ringing in my head: “We are fire, we have been fire and we will continue to be fire.”