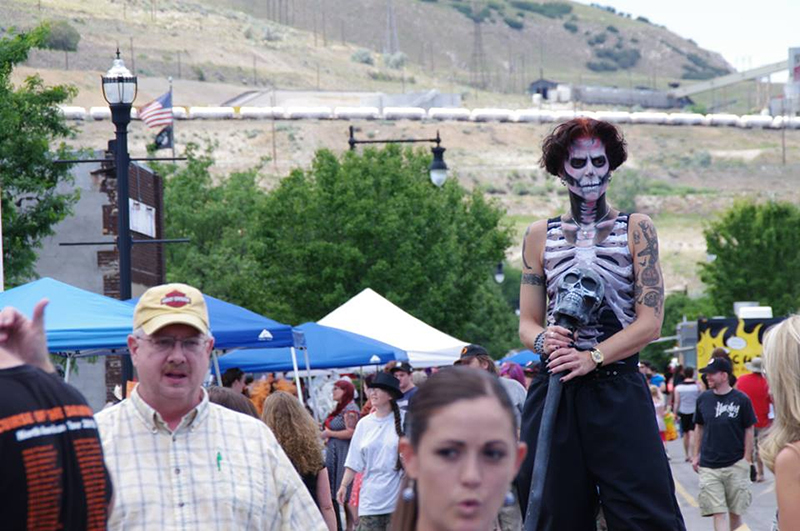 In addition to offering local ghouls the opportunity to celebrate their favorite holiday more than once a year, the Halloween in Summer Festival has led to the added bonus of creating community among businesses on Magna Main Street and the town’s residents. “The trick-or-treating draws people into the actual brick-and-mortar locations and allows people to explore what they’re doing,” says Storm. “We have one business that is here in Magna in some fashion directly because of the festival. They had a booth in the festival the past two years, and earlier this spring, We Witches 3 opened up on Magna Main, and it can be directly correlated back to the festival.” In 2014, around 5,000 people attended the festival, with 15,000 attending last year. The festival is expected to host 20,000 attendees this year, rivaling the 4th of July parade in Magna as the town’s largest annual event.

The amount of vendors has also rapidly increased, with over 100 already registered to participate in 2016. There will also be a performance stage in front of Magna Library, a second stage at the Power Plant bar’s Boo-dacious Beer Garden, a Little Monsters Area at Copper Park featuring rides and games, an all-ages cosplay contest, the annual Costumed Spectacular Shindig at the Filling Station to close the night and much more. The biggest new addition to the rapidly growing festival is having Salt Lake Comic Con as a sponsor. Comic Con will provide a pair of VIP passes to their convention as grand prizes for the cosplay contest and the closing party costume contest, and will also have a booth at the festival. “Of course, Comic Con is going to have a gigantic booth,” says Storm. “At this point, they haven’t confirmed what they’ll be bringing, but you know it’s going to be spooktacular because they’ve said they need a lot of space for what they’re bringing about.”

The event also holds a special significance for Storm this year because he will be releasing his book, 365 Days of Halloween, featuring 365 spooky illustrations completed over the course of the year—a feat he says he will never attempt again. Two documentary filmmakers, John H. Shaw and Marlene Shaw, will also be following the Andersons and the rest of the Art on You staff with “cameras up the ass,” as they so politely, put it to create a documentary about the festival that will be released later this year on DVD. “It’s neat to see this many vendors come out to the festival,” says Storm. “We are thrilled. It’s been a lot of work, but it’s gonna be a huge rewar.” As for what the future holds, Renee says, “The progression of the event has been so surprisingly rapid that I don’t really have time to think about what we want to accomplish next year—I’m just trying to catch my breath from what’s happening right now. The biggest goal is just to get some nice, solid attendance and who knows? Maybe we’ll start catching the eye of some famous people—maybe we could get a famous horror icon to come out.”

The Halloween in Summer Festival festival kicks off on July 15 at Pleasant Green Park in Magna, where Storm Van Ghoul will present a screening of Abott & Costello Meet Frankenstein. The event continues on July 16 with the Halloween in Summer Street Festival on Historic Magna Main Street from 10 a.m. to 8 p.m. For more information, visit halloweeninsummerfestival.com

Halloween in Summer: Building a frightening Magna Main
<<< Page One