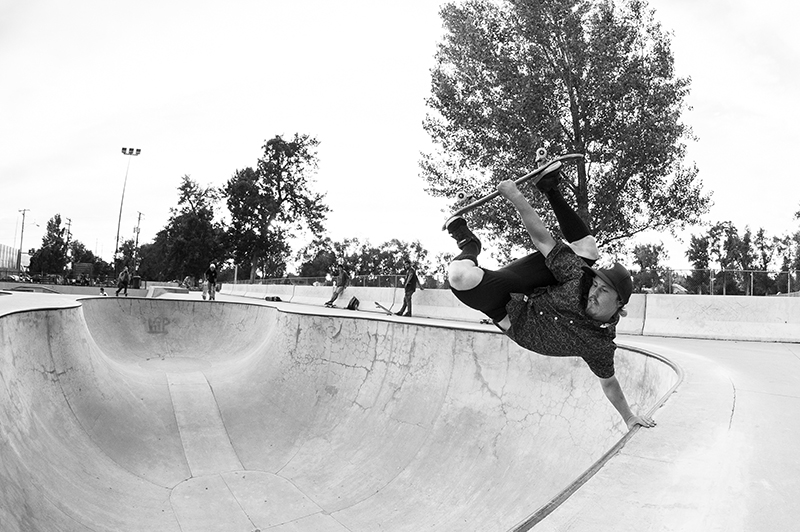 Clark Thomas: For The Love Of The Board

I first caught sight of Clark Thomas about a year ago when he took home the gold at the Fifth Annual Roughside of the Tracks contest, Roughside V. Though there were plenty of dudes killing it, I kind of knew from the start that Thomas was going to get the top spot. I first noticed Thomas at the bump off of 1300 South. Thomas rode away with a 360 flip right off the bat, and I want to say that he followed that up with a frontside 360. Those are two good crowd pleasers to start the day off with. Thomas kept that kind of shit going all day, ultimately earning himself the crown and a bunch of free gear. “That was a really good experience,” he says. Needless to say, my first impression of Clark Thomas was a strong one.

Now, I’m a bit old-fashioned, so I’ve never been too enthused about those wild, double-flip 360 super tricks. I’ll tell you what, though: I can’t deny true talent, and Clark Thomas has plenty of it. As showcased in Roughside V, Thomas can and will throw down hammers, flipping his board an extra time or two if needed. “I want to do certain flip tricks that people see and are like ‘Whoa, what was that?’” he says. “I just want to do things a little different.” He can throw out the gnarliest, most confusing trick at Liberty Park’s three-block, or pull a boned-the-fuck-out hand plant in the bowl—see @clarkthomicide on Instagram. While I’d like to see a lot more posts, Thomas’ Instagram provides us with a good look at him on the board, proving that he’ll ollie twice as far as you at Sandy Skate Park as well as helicopter spin the hell out of his board and catch that shit!

Though born in Utah, Thomas first stepped on the board when he was 11 in Oklahoma after getting a fresh pair of skate kicks. “I got some Vans one day, and my friend asked me if I skated,” he says. “I said, ‘No, but I want to.’ He had a board, and we just skated every weekend on his board.” Sharing a board? Now that’s commitment. Thomas eventually got his own ride and took skateboarding as his own. Once you see his skating, his early influences won’t surprise you. “The first video I watched was Almost’s Round 3,” he says. “You know, Daewon Song, Chris Haslam, Rodney Mullen—they all just inspired me. Chris Cole really inspired me, though.” Seeing a video like that at such an impressionable age would have any kid chasing those jaw-dropping tricks, and Thomas has definitely caught some.

What I like about Thomas is that he just wants to skate. That’s it. The dude has heart. He loves everything skateboarding, whether it’s the Oklahoma parks he got his start in, or the abundant, close-ranged spots of Utah’s north. “I just feel so happy to be a part of it all,” says Thomas. He moved back to Utah three years ago and was taken aback by our ever-growing skate scene. “Coming back here, it was a completely new environment,” he says. “I had no idea how the skate scene was, so I was mind-blown. Everyone just kills it so hard.” Agreed, my friend.

On the day-to-day, getting out with the homies pumps Thomas up to skate—that and a little self-motivation. He says, “You know, I think about certain tricks, and I get out there and do it.” If only it were that easy for all of us. When I speak of homies, I speak of Eric Ferguson, Thomas’ main man with talent on the board and behind the lens. “He’s the one who has helped me out with skating,” Thomas says. “Kills it at skating, kills it at filming—just an all around good dude.”

I hope, by now, you’ve pulled up Thomas’ Instagram page to get a sense of the shit I’m talking about. He’s absolutely destroyed Sandy’s skate park and left some NBDs at plenty of others, though his Instagram is only a glimpse of what Thomas can do on a skateboard. Check out his first video part from Transcend, a rad video filmed and edited by the previously mentioned Ferguson, or Fergy, as Thomas calls him. (That’s FergyFilms on YouTube.) In Transcend, he proves that he can take a slam or five and still get the trick. He pieces together some tech lines and has hammers all day, but then he throws a goddamn hand plant in the middle of it all? Sorry for the spoiler, but I was just that stoked. That’s one hell of a part. Thomas is already aching for more, too. “I’m working on Transcend 2 right now—that should drop this winter,” he says, looking across the table for the nod from Fergs, “or this fall?” He’s not done there. We can look for a video from Mark Judd’s After Dark Skateboards, where we can see more Clark Thomas footy, alongside longtime ripper and our July issue’s profile subject, Caleb Orton. After Dark backs Thomas, and he backs the company just as much. “It’s awesome,” he says. “I want to give a big shoutout to Mark Judd for supporting me and just being a really good friend.” I’m sure the feeling’s mutual. Thomas has to give all this thanks to his mom, though. He says, “My mom was the biggest supporter of my skating. She gave me rides to the park and skate contests, and she bought me boards and shoes. I’m extremely grateful I had her support.” Aren’t moms the best?

I’m backing Clark Thomas 110 percent. He has drive, he loves skateboarding and he takes his own approach to it all. Thomas gives back to skateboarding everything it has given to him. He’s a full-blood ripper. His plans for the near future are to “just try to to skate and have fun and go as hard as I can,” he says. I mean, who says that? A dude who is down for fucking life, that’s who.