“Wrestling gives people an outlet,” says star Ultra Championship Wrestling (UCW) wrestler Martin Casaus. “They can forget about any other crap that’s worrying them and just yell at us for a while. It makes me feel good.” And yell they do, like a brawling chorus. They shout, growl and cheer with an unbridled gusto, while a real-deal muscular spandex soap opera, a bloody dayglo boot party, unfolds before their widening eyes.  They know what’s up, that UCW offers the highest quality in-ring product around.

All Marks Ringside: Ultra Championship Wrestling in the Valley 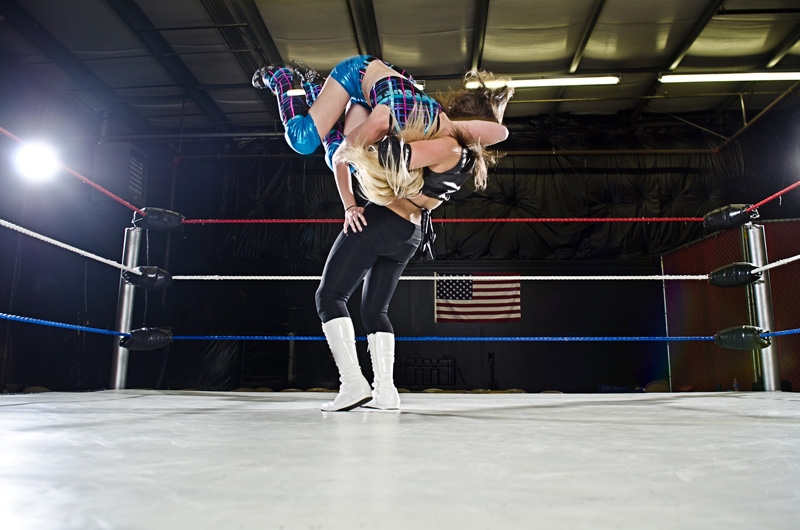 “Wrestling gives people an outlet,” says star Ultra Championship Wrestling (UCW) wrestler Martin Casaus. “They can forget about any other crap that’s worrying them and just yell at us for a while. It makes me feel good.” And yell they do, like a brawling chorus. They shout, growl and cheer with an unbridled gusto, while a real-deal muscular spandex soap opera, a bloody dayglo boot party, unfolds before their widening eyes. A full roster of colorful personalities parade their wares to these wrestling diehards, rookie and veteran, Mos Eisley cantina personified. They heckle greasy villains, cheer swaggering heroes and hurl obscenities at refs, enraptured by wrestling on the uppermost notch, too. They know what’s up, that UCW offers the highest quality in-ring product around. They know a UCW match comes packed with more high-flying luchadores, grappling muscle-heads, catty back-and-forths, sneering marauders and singlet colors than a Jim Helwig promo on loop. They know UCW is the real deal.

It’s not just about the violence for the dedicated wrestling fans (aka marks). They’re hip to the pre-written storylines and the choreographed fights. What shakes them to their gooey centers is the spectacle and the grandiosity woven into pro-wrestling’s very makeup. Watching these UCW matches is channeling the brazen living-room theater of The Iron Shiek spitting on an American flag, Jake “The Snake” Roberts taunting Macho Man with a 15-foot, de-venomed cobra. Mick Foley jamming a soiled gym sock down Vince McMahon’s throat, Bret Hart’s Montreal screwjob and Rowdy Roddy Piper bashing a coconut across Jimmy “Super Fly” Snuka’s snarling mug. It’s these images all wound together in an undulating pastiche of neon and canvas, spit and vinegar, sport and show, that works their very souls into corybantic frenzy. That’s what’s taking hold of them every other Saturday, wringing their inhibitions into a chokehold and spitting them into the wayside. To borrow from Jim Ross, that’s what’s putting “an ass every six inches.”

Local flavor isn’t lost on the fans either. UCW is a Utah born and bred organization, which spawned from company CEO Stevie Slick’s devotion to his own kids’ interests in the early 2000s. In this case, it wasn’t deconstructing toasters or collecting stamps, but bashing each other across folding tables in the backyard. “If there’s one thing I know about teenagers, it’s that if you tell them not to do something, they’ll find a way to do it behind your back anyway,” he says. With that mindset, he constructed a fully functional wrestling ring in his basement, complete with ropes and turnbuckles, and vowed to foster a supervised atmosphere for them to go about their matches.

The ring cultivated a spate of homebrew matches and led the boys to host their own events for neighbors, writing storylines and filming them. Slick eventually hooked up with an amateur wrestling promoter who invited his sons to come train with him, and the partnership led to a fundraiser at an Ogden high school, which looked to be Slick’s first break in wrestling.  Poor promotion and a low turnout dampened his spirits temporarily, but disenchantment gave way to resolve as he decided he could do a much better job on his own. With that experience, he set up his own wrestling school and promotion, and UCW was born in 2002. Though fresh-faced rookies in the early days of the biz, they quickly learned the ropes and rose to prominence as a well connected wrestling force in the area, enlisting interested parties, outside talent and a relentless grassroots approach to spread awareness in the community.

It’s never been easy for them, though. “Utah doesn’t really have a wrestling culture,” says Slick. Though pro-wrestling is a popular pastime in the Southern states, even into Texas and New Mexico, Salt Lake City offers so many entertainment options in such a small area that UCW has had to fight and claw their way to prominence. The heart and dedication of the organization shines through, though. It’s evident in the hushed reverence with which fans gather at the match and the way they explode on a suplex, curse at a ref-count and stomp their feet at the sight of such fast-paced visual artistry. Even more telling is the gritty reality, the in-your-face feeling of “now!” and the visceral exuberance that freely transcends the radon glow of a television screen or isolation of a nosebleed seat. In-ring thuds send shockwaves through our folding chairs, refs and wrestlers alike bristle at their cutting hisses, and they smell the sweat and blood, sweeter than a bowl of steamed crawdaddies. It is a full-on sensory experience: No wimps allowed.

It’s this sort of independent zeitgeist, along with the grassroots zeal of fliering, local ads  and word of mouth, which helped establish the company and beckon aspiring wrestlers to come a-knockin, like  Martin Casaus.  A tireless high school athlete-turned-stockbroker with a business degree and a devout wrestling fan since youth, Casaus called Slick to begin training and instantly found his niche. Impressed by his workhorse attitude, Slick began personally promoting him as a “heel” (that’s rasslin’ speak for “bad guy”), and the once introverted Casaus was able to come into his own. “Batman is only as good as the Joker is bad,” Casaus says with a chuckle. “Being a bad guy isn’t really my personality, but it got me out of my own little bubble.”

Working with Slick’s UCW promotion instilled Casaus with the technical wrestling skills to take his game to a national stage, even appearing on WWE’s network TV program, Tough Enough, which took aspiring wrestlers and promised to give one a full-on WWE contract, airing its fifth season on April 4, 2011. An injury sidelined him from the show on Episode Seven, but gave him the opportunity to come back to UCW, obtain co-ownership with Slick and share his upper-echelon wrestling experience with the company that started him off.

Through it all, UCW has grown tremendously in the last decade. “We were flying by the seat of our pants when we first started,” says Slick, “but now we’re held in very high regard in the wrestling world. Guys that train here can hold their own against anybody … and have!” Some of Slick’s students have appeared on RAW episodes, and Slick’s been able to work with such wrestling luminaries as Ric Flair, Triple H and Vince McMahon himself.

For $1,500 a year, students can enroll in UCW’s wrestling school if they can commit to training three to four nights a week. The class sizes vary depending on work and school schedules, but Slick works hard to bring in nationally recognized icons (Marty Jannetty and Trish Stratus to name a few) to work with his students and share their insider industry knowledge. Students get hands-on experience and an opportunity to hone their physical skills as well as their characters. Take Jason Bravo, for example. By day, he stocks produce at a Costco in Murray, but by night, he trots onto a wrestling ring in kelly green trunks, wrangling unsuspecting baby-faces (rasslin’ speak for “good guys”) in arm bars. With a background in theater and choir, Jason gravitated toward wrestling later in his life in a time of upheaval. “Sometimes I practice my promos in the mirror,” he says, “to keep my character alive.” Ultimately, he loves giving the crowd a good show, and for him, it involves walking out to a deafening torrent of boos and catcalls.

Sierra Rose, a student en route to becoming a paralegal, takes a similar approach in UCW. Being wowed by WWE Divas like Lita and Trish Stratus in her youth inspired her to start putting her neighbors in headlocks on the front lawn. “My parents are supportive,” she says. “I’m still Daddy’s little girl.” Though soft spoken on the outside, in the ring, she plays a narcissistic wrongdoer, pulling every dirty trick she can (even choking) to take down opponents. “I like pissing people off,” she says with a grin.

UCW hosts at least one show every other week, and sometimes more, one of their most successful events being the 10-year anniversary held back in March 2012. They’ve got their own YouTube channel, youtube.com/user/NWAUCWZERO, and by the spring, they’ll have a weekly television program through a station called Top of Utah TV, which broadcasts throughout northern Utah. They’ve got merchandising, color commentary and most of all, they’ve got a devoted core group of fans.

So here it is, a room roughly the size of a small airplane hangar, decorated by banners and strobe lights. A ring punctuates the center of a concrete floor, and 50 devoted fans perched on metal folding chairs fill the air with chatter. They’re throwing fists and elbows, stopping only periodically to funnel a Coke or dip a nacho, wholly captivated in this exhilarating moment, this dazzling conflation of “sport” and “entertainment.” There’s all manner of faces in the crowd: young-uns, college students, professionals, retirees. A defeated heel slinks off to the locker room and a triumphant face hoists the championship belt above his shaven head. This is the way it should be, good triumphing over evil with a flashy struggle to ease it down. These are raw Saturday nights. Dewey-eyed and charged to the hilt, it’s the spirit of youth, free for the taking. All hail UCW.

For information, check UCW’s website at UCWzero.com, and for high-octane fun, check out the matches scheduled for Dec. 15 and Dec. 29.