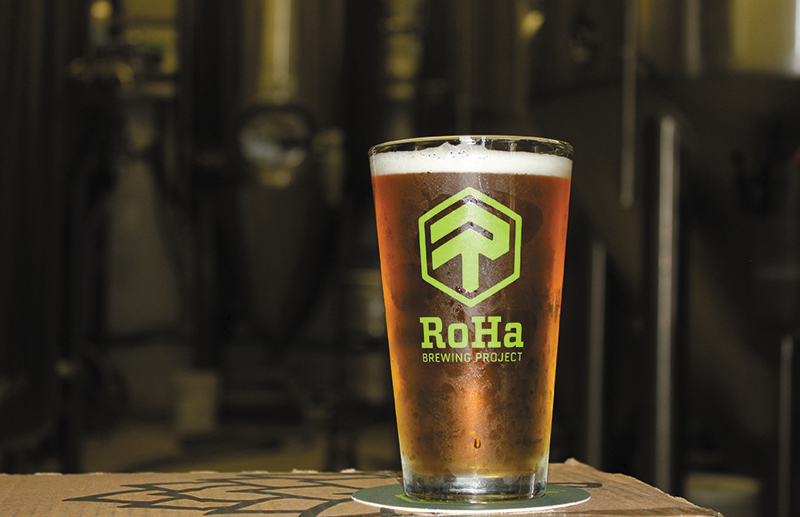 By Chris and Sylvia Hollands
October 3, 2019

Not picking up free beer is probably among the most tragic things beer people can do. When former SLUG “Beer of the Month” writer and current Utah Beer Blog guru Mike Riedel pointed out that we had not picked up our free beer from RoHa Brewing Project, we knew we needed to act straightaway. You see, RoHa has a fun strategy. Patrons can “pay a beer forward” by pre-purchasing a beer for a friend and posting their name on a bulletin board hanging in the taproom. Then, when the friend pops in, they can enjoy an ice-cold brew—free of charge.

We had perfect timing visiting the brewery—Roha re-released Freshies Wet Hopped Extra Pale Ale. This a brew made with 100 pounds of local, fresh-picked hops. Co-founder Rob Phillips says, “When [Co-Founder Chris] Haas was at Desert Edge Brewery, he always did what he called, ‘Radius.’” That is where the ingredients used in a batch are gathered within a certain mile radius of the brewery. For Freshies, the hops were literally picked that day, delivered to the brewery and immediately added to the boil. Timing was well-thought-out, ensuring that the golden liquid was ready to go when they needed to toss it all in—no adding hops later, just straight-up fresh.

We had Freshies on draft from the taphouse and took some home in a growler. This brew pours a crystal-clear gold. While pouring, disruption of the liquid forms a clingy but minimal white foam. Like many wet- or fresh-hopped beers, the oils from the hops seem to contribute to the foam sticking to the glass edges. With the hops added only during the boil process, the aroma is quite mellow with subtle hints of earthiness and floral notes. It has a clean body made primarily with 2-row malts to showcase the hops. Freshies has all the positive hop characteristics minus the harsh bitterness. Phillips mentioned that the hop grower tested the hops to get RoHa the alpha acids needed for this year’s beer. This may have led to the clean and refreshing flavor, avoiding many of the pitfalls some fresh-hopped beers face, such as grassiness or dirty flavors.

RoHa Brewing Project celebrated their second anniversary and will be at Boo!stillery at The Union Event Center on Friday, Oct. 18., With some recent additions to their brewing equipment, they have big plans for the rest of the year. Freshies is just the start of a line of seasonal specialty beers. Expect a grapefruit pale ale, for which they will take the Back Porch Pale Ale and add fresh grapefruit. Another is a porter called Project Porter. Additionally, a taproom favorite called Americano, which is Three Deep American Ale infused with cold-brew coffee, will make an appearance soon.

It sounds like there are many reasons to stop into RoHa. Overall, it seems this brewery is gaining newfound momentum heading into its third year, and there are plenty of things to get excited about. Make it a point to get into the brewery and check that bulletin board. You may just have a free beer waiting for you. Enjoy your free beer and/or pay it forward by adding a new name to the board because the only thing better than good karma is good beer karma.