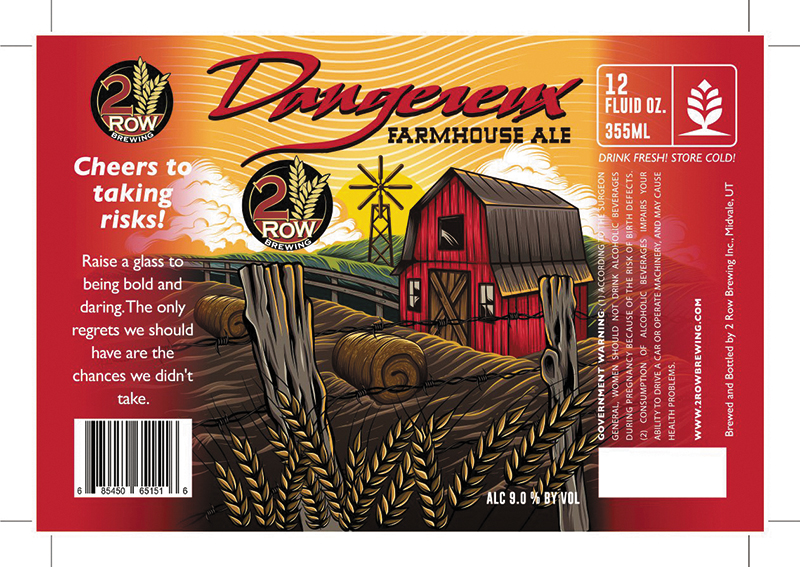 Each time we visit 2 Row Brewing, we rub shoulders and sidestep with other eager patrons pursuing fresh, hoppy beer in the cold case. The surplus of steadily streaming customers isn’t surprising, either, because there is no untruth in their tagline, “Little Brewery, Huge Flavor.” Head Brewer/Owner Brian Coleman has become a frontrunner in our state, locally dominating the popular IPA world of craft beer. Brian’s craftsmanship with brilliant, hop-laced concoctions is award-winning, easily creating a cult-like following for his beer. 2 Row has a knack for pumping out new brews that taste great. And along with continually fresh beer, frequent new-beer releases are common for this family-owned business. However, regardless of any “new beer” reason we visit the brewery, we certainly place a couple Dangereux Farmhouse Ales, a staple from their opening lineup, in our build-your-own six-pack. Coleman is an overall well-rounded brewmaster, and this beer is something special. It has history dating back to his home-brew days.

After picking up chilled 12-ounce bottles from the brewery, we like to enjoy Dangereux from a tulip or tumbler. Dispensing the liquid causes the tiny carbonation bubbles to surge to the bottom of the glass, creating an initially aggressive, white, foamy head up top. It dissipates quickly, but easily rejoinders with the swirl of the glass. The cloudy beverage settles into a clear, brilliant, gold hue. Often confused with sour beers, this farmhouse ale does have a familiar musky, almost dusty smell, and has often polarized people when first trying the style. Dangereux’s character profile is based on the French farmhouse style of beer known as a saison. Usually brewed to be light, lower-alcohol summer thirst-quenchers, brewers nowadays have kicked up the ABV levels without hindering the bright flavors. At 9 percent, Dangereux (“dangerous” in French) stomps on the old-world traditions—but here is the catch. This bad boy doesn’t drink like a monster. It is light and poppy in the mouth, with a familiar fruit and peppery taste. This is certainly a refreshing drink that simply goes down too easily. Coleman has perfectly crafted a flavorful beer that finishes dry, showcasing that the yeast has done its job seeking out every bit of sweetness while heaping up the alcohol content.

Dangereux is based on the French saison approach but as a loose interpretation. Though historic style similarities are present, 2 Row undoubtedly places an appetizing twist into it using American ingredients and saison yeast. We were lucky enough to try an early version of this beer when Brian was still winning home-brew awards and aspiring to get into the commercial craft beer business. Recalling this farmhouse brew from that sample alone, it was a noticeably winning formula. Our faces showed all grins when he included it in the initial launch of 2 Row Brewing. This beer is shelved perfectly in a cold case next to some of the best IPAs and barrel-aged stouts in the state and region—and it holds its own. We can attest, as the name suggests, that this beer is dangerously delightful. And we are not going to lie to you: The very first taste may surprise you (only because the style is so different from the most popular beers out there), but the proof is in the history. As 2 Row Brewing says, “Cheers to taking risks!”