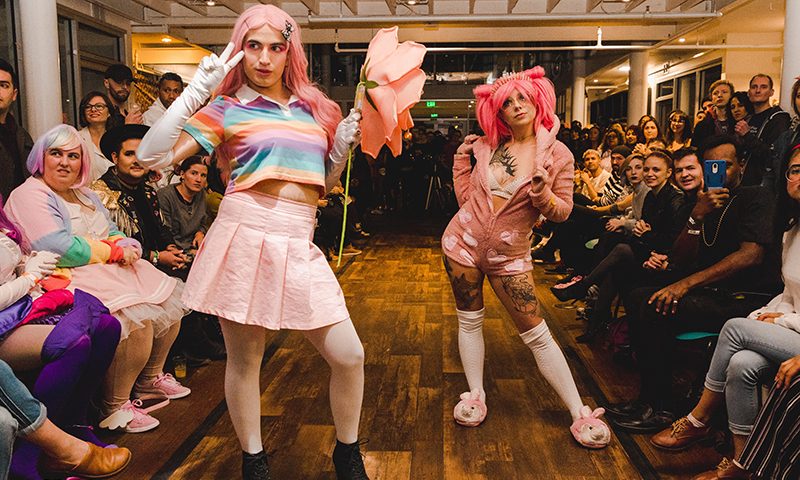 Creature Feature: Bring it to the Ball

The Anime Kiki Ball didn’t come to play—it came to SLAY. Never have I experienced an event like what took place at the SLC Slay event on the infamous night of Oct. 11, 2019. A night that won’t be forgotten soon. A night that looked, felt and tasted like a New York City warehouse in 1989. The categories were exciting and the participants enchanting during this celebration of life, love, dance and the artistry of the LGBTQ+ community.

For those unfamiliar, a “Ball” is an event highlighting the bodies of our community. If you’re wanting some additional education, check out the crucial documentary Paris is Burning, where a group of queer New Yorkers form their own self-chosen families and compete together in dancing and modeling competitions known as Balls. Although the Ball culture started back East within LGBTQ+ circles, Balls remain open to all under one condition—maintain respect for the competition. Whether that be showing respect for your competitors (present them with a hug or a kiss at the end of your round), for the judges (act right) or as an audience member (participate!), a Ball cannot function without all three.

SLC Slay has been throwing Balls in Salt Lake City for two years now. I had the pleasure of attending the first ball as well as the most recent Ball. The difference that two years have made is nothing short of incredible. Each Ball consists of different categories that competitors can walk in. Walking requires that a competitor take the stage and are then judged on their runway walks, their vogueing skills and other abilities to seduce the judges to rank them high enough to move on to the next round. This goes on until only two remain and one is scored higher than the other and a category is won.

The most recent cast of characters participating in and judging the Anime Ball were a vivacious group of talented entertainers—CC 99, Michael Elliot, Winter Rose, London Skies and the notorious Delores Ubetta (also known as Dolores Ninja of the House of Ninja). The judges were brought out one by one to a roll call DJ’d by DJ M*SC (who would be another star of the evening). This got the crowd so pumped and thirsty for the action. Each judge would observe and judge the contestants in the categories of “Runway,” “Hands,” “Vogue,” “Sex Siren” and “Lip Sync Assassin.” Each category emphasized a different aspect of the Ball culture, whether it be the face, the body, the look or the moves.

Performers would walk for the judges while either posing, modeling or dancing. At the end of the runway, the judges voted on you. If you get 10s across the board, you proceed to the next round. The final rounds had contestants walking two at a time. One performer is chosen in favor of the other until only two remain—the runner-up and the grand prize winner. It’s fast paced and the judges are a no-nonsense group of artists. They all, along with Tia Cakes and DJ M*SC work to keep the energy levels high and the crowd engaged for hours while the Ball is in session.

The audience was ravaged for entertainment, and my Lord did the Ball deliver. A cacophony of masculine, feminine and non-binary energy flooded that runway. I’ve never screamed harder, snapped my fingers louder, or been more turned on during an event. One of the events was called “Sex Siren” and the contender’s sole purpose was to, in the words of emcee Tia Cakes, “make us want to fuck you!” of which, they did. To us all. They really did it to us.

There is something so magical about the power of music, dance and art that can really bring a community together. During the evening, SLC Slay creator Michael Elliot introduced his first fashion line Futura//Futuro. The clothing was worn by dancers, friends and other community members. It showcased a masculine structure and a feminine flow with each garment. The line consisted of oversized fits and see-through materials that both highlight and obscure the wearers true form. The whole show felt distinctly androgynous, making it a standout part of the Ball that embraced all gender and identities.

Overall, the Anime Kiki Ball was a night of beauty, art and communal energy. We were graced by some of the most beautiful queer performers, models, dancers and eventgoers at the event. So much fresh, raw talent was projected onto that runway, so be sure to check out and follow SLC Slay’s Instagram @slcslay for a list of winners and video and photographs from the event. It truly was a historic night for the Ball scene and one of the largest events of its kind here in Utah in recent history. In a time plagued with exclusion and fear within minority groups, SLC Slay found a way to bring such a pure light and intense communal love to our big little city.

Creature Feature: Michael Elliott is a Diamond in the Rough
SLAY SLC: Celebrating Ball Culture in the Beehive State