As much as I hate to admit it, I’ve always been a dedicated Dungeons & Dragons (D&D) player, who never even bothered to check out what other RPGs the gaming world had to offer. 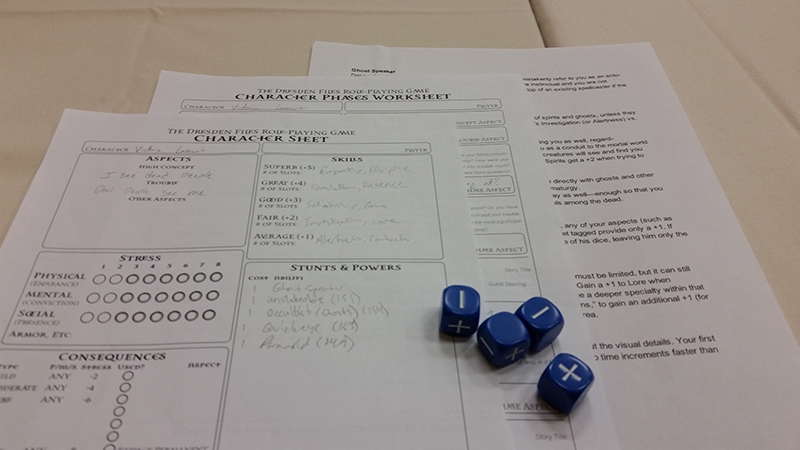 The Dresden Files allows you to play as any kind of paranormal creature you can imagine. Photo: Nicole Stephenson

As much as I hate to admit it, I’ve always been a dedicated Dungeons & Dragons (D&D) player, who never even bothered to check out what other RPGs the gaming world had to offer. I made it a point at this convention to try out a new RPG that would follow the same style as my beloved D&D. The Dresden Files did not disappoint. It featured a simplified version of the D&D dice rolling system and a different theme. The theme of The Dresden Files is supernatural—think ghosts, demons and were-cougars instead of dragons, knights and rogues. I really enjoyed the simplified dice system—instead of having a full set of dice that include a d20 and d12, all you had for this were four “Fate Dice.” These dice were your traditional six-sided dice with two negative sides, two positive sides and two blanks. Also, there was no need to roll for things like initiative and perception—you didn’t have to spend the extra time to figure out what ability you needed to roll for in order to move through the game – and that was just fantastic. The Dresden Files is a friendly RPG that any type of gamer with an imagination could enjoy. Just like D&D, The Dresden Files is open to interpretation as far as gameplay goes. You can play with a map, drawing out buildings and scenarios, or you can play in a storytelling type setting where each player contributes to the story through their own custom-made character. The Dresden Files is just as dynamic as Dungeons & Dragons without being so complex, and I love that they chose to go with a supernatural theme instead of the typical medieval theme that RPGs tend to gravitate to. I’d recommend trying out The Dresden Files if you are into the supernatural, new to RPGs, or were ever overwhelmed by Dungeons & Dragons.