Once again, SLUG hit South by Southwest (SXSW), the music festival that engulfed the city of Austin, Texas, for its 27th year. During the five-day adventure, we fearlessly messed with Texas and stayed hip to the music acts that dazzled our eyes and ears and munched on our hearts amid crack pipes, grilled cow hearts, topless bike cabbies and a rollerblading alien. 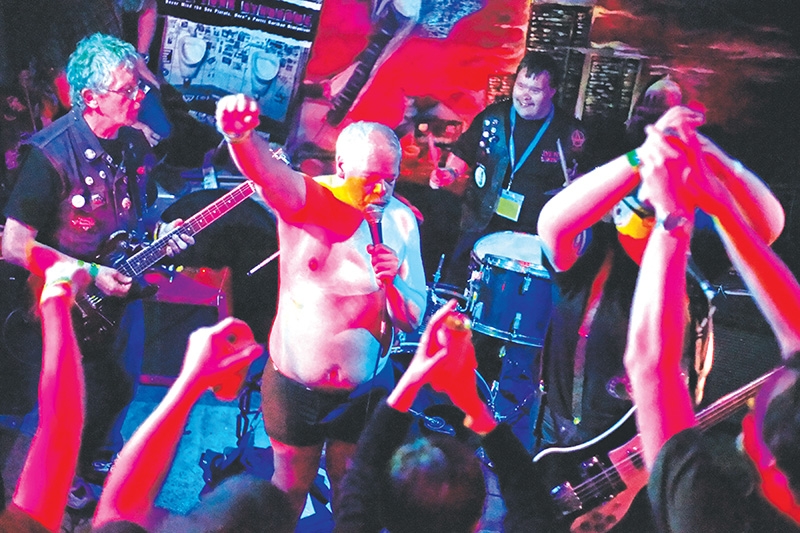 Call of the Void
Red 7 03.16
Chaos in Tejas & Relapse Records Official SXSW Showcase
Call of the Void = Gaza + Early Graves
Entering Red 7 in Austin, Texas for the Chaos in Tejas & Relapse Records Official SXSW Showcase, it was apparent that Call of the Void was given the perfect venue to help the crowd mirror its name. They used a combination of crust, sludge and infested grindcore to help drive the vile red substance forcefully through everybody’s veins. Onstage, Call of the Void was armed with Sunn, Orange, Verellen, Peavey and Ampeg amps, and Atlas cabs made out of Denver, Colo. as the keystone to deliver every range of decibel to hurt ears. Although drummer Gordon Koch said he doesn’t use metronomes in an interview with Blow the Scene, after seeing their live performance onstage, it’s clear that guitarist Patrick Alberts is a human metronome, swaying back and forth across both sides of the stage while moving in time with the music. Call of the Void’s new album has just been released on Relapse Records and was recorded by SLC’s Andy Patterson, featuring artwork by our own Anthony Lucero, formerly of Gaza (RIP). –Joshua Joye

Crooked Bangs
Beerland 03.16
Jolly Dream Records / Tic Tac Totally Showcase
Crooked Bangs = Misfits x (Bratmobile – riot grrrl + Julia Kristeva) + Sylvie Vartan x Bauhaus
Although Crooked Bangs are a three-piece outfit out of Austin, Texas, their overall sound transcended the sum of its parts. Drummer Phil Gonzalez’s solid rock n’ roll beats set the stage for guitarist Samantha Wendel’s distinct style: Something I noticed under the red Beerland lights was that, within her simple chord progressions, she often involved chord structures that went beyond power chords, which added a sense of melody to her vicious strumming as she hunched over in a brooding dance. Frontwoman Leda Ginestra stole the show with her volatile singing—her contralto voice would coast until it began to shake and warble, and she would then shoot shrill barks into the venue. Her stage presence was that of a possessed woman—she would stare demonically as she sang or paused in between vocals, then her eyes would pop out. Toward the end of their set, Ginestra’s shrieks became more frequent and her gaze more piercing, and she would collapse to the floor as if the dark, rock n’ roll melodies she sang in French sent her into convulsions. Catchy and ghastly, Crooked Bangs played sexy, vintage French garage-punk that chomped up my heart. –Alexander Ortega

Diamond Rings
VEVO TV Control Room 03.15
VEVO Showcase
Diamond Rings = (Ian Curtis + Elvis Presley) vocals + (David Bowie + Morrissey + Vanilla Ice) aesthetic
Arriving at the venue to see Diamond Rings, a gender-bending electronic pop artist from Toronto, I fully expected to walk in on a black stage covered in rainbow lights, a fog machine and John O’Regan in a futuristic, shoulder-padded ensemble and some lipstick. Instead, a pretty normal-looking dude wearing all black was perched on a stool at the edge of the stage cradling an acoustic guitar. As soon as his low, sultry voice came through the mic over some simple guitar strums, I set up camp. O’Regan kept his eyes closed during his entire first song, opening them with an “Oh, there you all are!” which set the precedent for his candid and relaxed demeanor between songs, speckled with funny quips like, “Tonight’s show is laser free.” The setlist included two of my favorites from his latest album, Free Dimensional: “Runaway Love”––chewy bubble-gum pop; and “Put Me On”––a darker, Soft Cell–”Tainted Love”-esque track. By the end of his set, the crowd was wrapped close and tight, doe-eyed, knees weak and demanding an encore—which, in a rare SXSW moment, was kindly performed. (The Depot, 04.10 with OMD). –Esther Meroño

Howl
The Dirty Dog 03.14
Metalsucks Showcase
Howl = (Amon Amarth x High On Fire) / Elitist
Having never heard Howl, I was totally shaken up by the earthquake they created live. Vocalist Vincent Hausman had the whole Dirty Dog bar clenching their hands and pumping their fists as he gesticulated about the stage in wolf-snarly roars, like a hype man for war. The dimly lit venue fostered exuberant sparks and explosions of energy as Howl worked through their songs that included rhythmic builds that slammed into hearty, chuggy sections. For being a new addition to the band, which Hausman pointed out, bassist Jesse Riley worked his five-string axe to help fill out the room with deep tones. Howl aren’t particularly fast, but their sense of rhythm—in large part created by guitarists Josh Durocher-Jones and Jonathan Hall—carried their songs for me to head bang enthusiastically, and their sheer intensity was underpinned by drummer Timmy St. Amour’s solid double-kick strikes, which deftly transitioned the band into different time signatures. The guitarists used melody sparsely, so when they moved beyond solely playing riffs, their catchy hooks lent the songs a vibrancy that transcended run-of-the-mill metal. Hausman’s stage presence, moreover, propelled this heavy band along with guttural euphony. Ultimately, I felt like a barbarian the whole time. –Alexander Ortega

Pertti Kurikan Nimipäivät
Headhunters Patio 03.14
Pertti Kurikan Nimipäivät = Rudimentry Peni + Aus-Rotten + Disorder
I find something therapeutic about going to a punk show in a dingy, dirty dive. I like watching the crowd swill cheap beer and fist-pump in the pit to a band that “just doesn’t give a fuck.” I bet Pertti Kurikan Nimipäivät, the crust punk band from Finland, would agree. Comprised of four adult males with developmental disabilities, Pertti Kurikan Nimipäivät played loud and fast, like it was the last show of their lives. They all looked like they were in their mid-50s, some playing their instruments better than others. At one point, the bass player was completely off-rhythm, but he powered through like it was no big deal. In true crust punk style, the band’s namesake and guitarist, Pertti Kurikan, played several songs with his back to the audience. Halfway through, singer Kari Aalto stripped down to his underwear. He tried to go further, but their manager suddenly appeared and coaxed him to stop. His low, rough vocals had a good hardcore-style rumble. He wrapped the mic cord around his eyes and channeled GG Allin. Before I knew it, Aalto was on the floor screaming undecipherable Finnish lyrics while the band played their last song.  –Angela H. Brown

Sound Mass
Salvage Vanguard Theater/The Hideout 03.14
SXSW Official Showcase
Sound Mass = (My Education + Theta Naught) x A night at the symphony
Looking through set times for Austin-based post-rockers My Education, I accidentally stumbled across Sound Mass, their side project with none other than Salt Lake legends Theta Naught. Watching them set up was an experience in itself: 12 musicians playing everything from the usual band setup to an electric cello, a vibraphone and a viola, combined with two drum sets that sat facing each other. The onslaught of music started slow and steady, layering flawlessly as more instruments joined in, the musicians watching and listening to each other as they built the song––Sound Mass, indeed. I was so blown away, I ended up at their second show of the day, which proved to be just as stimulating visually as it was aurally. At the Vanguard, a projection screen in back of the band showed moving patterns, but this time, those were projected straight on the band, and as my eardrums melted away from the wall of sound, so did the musician’s faces. I was later told that a lot of what they do is improvised, as they’re spread out across the country and have minimal practice time. Keep an ear to the ground for Sound Mass as performances are rare and far between––I must’ve picked up a lucky penny somewhere in Austin. –Esther Meroño

Stardeath and White Dwarfs
512 Rooftop 03.12
ACM Showcase
Stardeath and White Dwarfs = The Brian Jonestown Massacre – Anton Newcombe + Spaceman 3 +Velvet Underground – Lou Reed + magic mushrooms
Oklahoma psychedelia experts Stardeath and White Dwarfs are best known for their collaborations with The Flaming Lips, first covering Pink Floyd’s classic album, Dark Side of The Moon in 2009, and later in 2012, taking on King Crimson’s In the Court of the Crimson King.  These Midwest rockers aren’t just a glorified backing band: They’re chimerical songwriters in their own right. I was fortunate enough to preview their newest original material onstage during their second SXSW performance. They jammed for over an hour under a white tent crowded with around 100 fans. Several custom-built lighting triangles topped the band’s amps and cabinets, syncopating at all the right moments. Purple lights reflected off the tent’s low ceiling, casting a pink hue across audience’s faces. A smoke machine added to the surreal atmosphere, enhancing the visuals and providing a smoky screen for the band to hide behind. Their 60-minute set flew by, and before I knew it, the audience and I were screaming for an encore. Stardeath and White Dwarfs obliged, closing out the night with The Stone Roses’ “I Wanna Be Adored.” Let’s hope the next album Stardeath and White Dwarfs cover will be The Stone Roses’ self-titled record. –Angela H. Brown

Click here to view the photo gallery of SXSW!