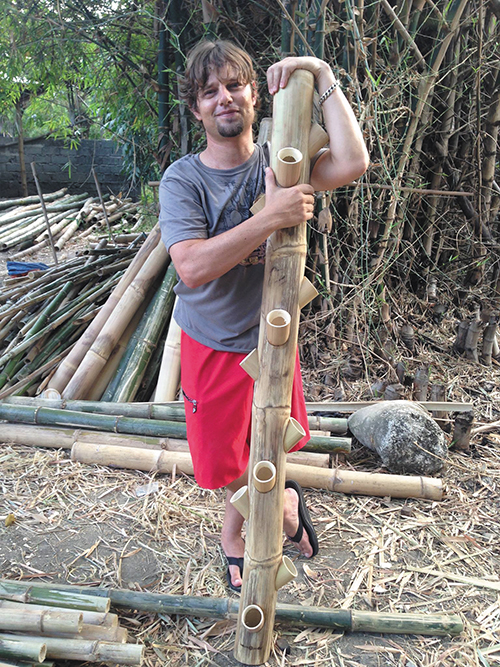 In the shadow of Mt. Timpanogos, Orem-based NaturePonics creator/founder Daniel Wagner reveals his plan to change the world: “We would like to have a similar effect on the food industry that Tesla Motors has had on the car industry,” he says, comparing his natural approach to vertical gardening to the electric alternative to using oil. His aim is to make self-reliance a reality for everyone, creating an easy approach to vertical gardening that both beginners and experienced green thumbs can use. They range from smaller bamboo “towers” that can be hung from windows for herbs for the less experienced, to larger, residential and commercial builds that can grow everything from tomatoes to kale and zucchini. These “Boo Gardens” reduce the amount of water, soil and space needed to grow most plants, and have the potential to feed a family or even a community.

For Wagner, the need for self-reliance through vertical gardening became a personal issue during the stock market crash of 2008. As someone who had been in real estate up until that point, Wagner decided to shift his focus to incorporating more sustainable practices in his own life. During the 2008 crash, “I thought, ‘I’ve got to reinvent myself, and the last thing I want to do is go back into the world of unsustainable,’” he says. Wagner’s inspiration for vertical growing came from the Tower Gardens at Epcot Center in Disney World, where a diverse mixture of plants grow indoors in a version of vertical farming that involves aeroponics, which uses little soil and recycles much of the water to simulate misting or raining, reducing the amount of water used in growing specific plants. “I love all vertical gardening,” says Wagner. “I didn’t invent any of this stuff.”

However, one of the major problems of most of the vertical farms in existence, for Wagner, was that most were created out of plastic, which is not sustainable. “Vertical towers were beautiful to me, but the white, PVC plastic … just didn’t cut it,” he says. Wagner’s solution was to use bamboo, which he calls “nature’s PVC.” Wagner sources his bamboo from places such as the Philippines and Indonesia, where it can take only about three years to regrow, making it highly renewable. The bamboo products at NaturePonics are also sealed with shellac, a naturally occurring substance made from the secretions of the lac bug, which he sources from India and Thailand. “We’ve done the research and development over the last six years,” he says. “We didn’t want to take a bunch of natural wood and seal it with polyurethane on it or something. Seeking out shellac … was about figuring out how to take the natural product and [make] it durable.” Wagner’s own towers have weathered the last six years remarkably, despite the harsh conditions in Utah. The result is a product that uses natural resources in a way that is beautiful and sustainable while providing quality food.

This model of sustainability is something that Wagner has been working on in his own life, testing out his Boo Gardens for his own use before filing for patents and going public with his idea. NaturePonics boasts their own fully functional vertical farm, where they not only grow plants such as tomatoes, peppers and a variety of greens year-round but also raise fish, such as trout, and combine these two elements to form a symbiotic relationship with hydroponics and aquaponics. As Wagner shows pictures of 9-foot-high walls of tomatoes that intertwine and produce a bountiful harvest, he explains that NaturePonics also supplies food locally for places such as Sundance Resort and The Communal Restaurant in Provo. It’s also the main source of what Wagner eats himself. “Farm to table is still doable; it’s just a matter of thinking outside the box,” he says. “You don’t need 100 acres and a billion gallons of water anymore—we’ve changed that. We just want to turn organic back into normal.”

Wagner’s goal for NaturePonics is not to make a bunch of money, but to revolutionize the way we grow and source our food. For him, this means eradicating practices that destroy the environment by companies like Monsanto, who are also known for genetically modified food, and empowering people to cut down on what they need from the grocery store by growing it themselves. NaturePonics is already working with clients around the world, specifically in agriculture-rich countries such as India, helping people start their own commercial farms that can provide a cheaper and more sustainable alternative to shopping the organic section at the grocery store. Wagner is also planning on moving his farm to Sebastapol, California, to be able to work with more chefs, reach a wider market, and possibly work with the wine and cannabis industries in addition to growing food. “We’re doing this to provide jobs for the world and food for the world,”  he says. “Their success is the world’s success. Our success is the world’s success.” While Wagner often claims that the unhealthy and unsustainable practices used to produce food in the U.S. are the equivalent of “driving off of a cliff,” he has hope that providing a solution, a natural and practical way to garden vertically, will get society to turn back to nature for their food once again. To learn more about NaturePonics’ mission or to pre-order a boo garden, visit natureponics.net.