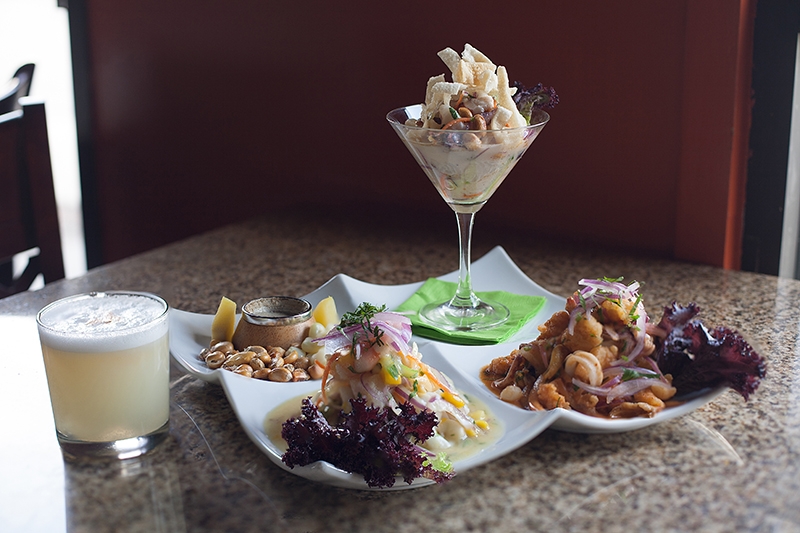 The Cebiche Fusion features three ceviches that will tantalize the tastebuds of ceviche connoisseurs and newcomers alike.
Photo: Garret Allen

Del Mar Al Lago: Bringing the Beach to the Beehive

Salt Lake City
Mon.-Thurs.
Lunch 11 a.m. – 4 p.m.
Dinner 6 p.m. – 9 p.m.
Fri.-Sat.
Lunch 11 a.m. – 4  p.m.
Dinner 6 p.m. – 10 p.m.
Sun. 11 a.m. – 5 p.m.
T. 801.467.2890
Despite the cold weather that plagues the  Wasatch Front during the beginning of spring, a trip to South Salt Lake’s Del Mar al Lago is a great way to speed up the seasonal transition—or at least fool yourself into thinking that summer has come early. The restaurant specializes in ceviche—a classic and refreshing Peruvian dish, which is a medley of seafood that has been marinated in a lovely mixture of citrus juices and spices (they call it leche de tigre or “tiger’s milk”) until the acidity permeates and cures the seafood. This preparation manages to preserve the meat’s fresh oceanic flavor while bestowing the morsels with a melt-in-your-mouth texture. It’s served chilled with thinly sliced onions and peppers, and each bite brings the diner a little bit closer to their favorite beach.
I’ve had ceviche before and, though I liked it, I thought that the acidity of the marinade overwhelmed the subtle flavor of the fish. This is not the case at Del Mar al Lago. The menu boasts a wide range of ceviche variations, and each one has its own special arsenal of well-balanced flavors. Since the restaurant offers such variety, the Cebiche Fusion ($23) is a great place to start. Touting three different ceviches that capture flavor profiles from three different countries, the Cebiche Fusion also demonstrates Chef Frederick Perez’s alchemical ability to infuse different flavors into the classic ceviche playlist.
Though each ceviche can be ordered individually, it’s much more fun to see a well-laden plate with perfectly formed dollops of mixed seafood ceviche come rolling up to the table. In addition to fresh fish, these ceviches contain marinated calamari and tiny octopi. My favorite of the three was the Cebiche Brasa, in which the classic Tiger’s Milk has been spiked with the smoky flavor of chipotle. Imagine spending a night on the beach while a campfire smolders lazily at your side, and you’ll get the general impression. I also took note of the fact that the octopus and squid—which are so often rubbery messes of disappointment—had achieved an ideal texture. The Cebiche Chifa is topped with a crispy wonton wrapper, which denotes the presence of Asian flavors like sesame and ginger. The ginger and citrus paired nicely together, but, again, were used with the right amount of moderation so the seafood could take center stage.
This ceviche world tour ended with the Cebiche Ghandi, which was very tasty, but my least favorite of the trio. According to the menu, the Cebiche Ghandi was spiced with curry powder, but either the tiger’s milk was too aggressive to let the curry flavor through, or there wasn’t enough of it to make an impression—which was a shame because I think curry would have been an interesting addition to the flavors that were at play.
If the thought of nearly raw fish and seafood doesn’t quite do it for you, Del Mar al Lago offers some other delicious options. For example, the impressively titled Arroz con Pescado al Grill en Salsa de Camarones ($17) was the sleeper hit of the evening. It starts with a generous filet of grilled, market-fresh fish that is slathered in a gorgeous, yellow sauce that is unlike anything I have ever tasted. The unique mixture of seasoning and rich, buttery texture was both unfamiliar and comforting at the same time. The dish comes with a heaping ball of rice that was quickly put to use, sopping up the remaining gravy after the fish and shrimp were long gone.
Like the Cebiche Fusion, The Piqueo Norteño ($19) is a great option for those who want to get a taste of multiple house specialties. The dish includes a serving of Cebiche Classico, a less adventurous but equally delicious alternative to the aforementioned ceviches; Jalea Mixta, a pile of deep-fried calamari, fish and octopus—crispy and light, despite its preparation method; and Arroz con Mariscos, which is a salty and flavorful paella-type dish that is prepared with the usual seafood suspects.
Though Del Mar al Lago prides itself on its selection of seafood, the Lomo Saltado ($14) is a hearty and satisfying option for folks who are craving a bit of red meat. Lomo Saltado is a sizable helping of a beef and vegetable stir-fry served on a bed of house fries and a baseball-sized scoop of white rice. The beef was cooked well, just a bit overdone for my taste, and the stir-fried tomatoes provided a nice pop of sweetness amid the beef’s umami flavors.
Based on my experiences with Del Mar al Lago, it’s no surprise that it has claimed the “Best Discovery” award from Salt Lake Magazine’s prestigious Dining Awards, along with a nod from City Weekly’s Best Of Utah Awards. It’s a great destination for all breeds of diner—from the casual folks who are looking for something unique yet accessible to the hardcore foodies who find themselves jonesing for some expertly prepared ceviche.