Up until recently, I never really considered Provo a place that cultivated any authentic type of food culture. It’s full of various chain restaurants, fast food joints and a few dives that offer a bit of local charm, but Provo’s food scene was almost nonexistent. That was until I attended Local First’s Celebrate the Bounty event, where three Provo sparkplugs brought their A-game: The farm-to-table virtuosos of Communal Restaurant, the Southwestern Native American pioneers of Black Sheep Cafe, and the regional comfort food experts of Station 22. 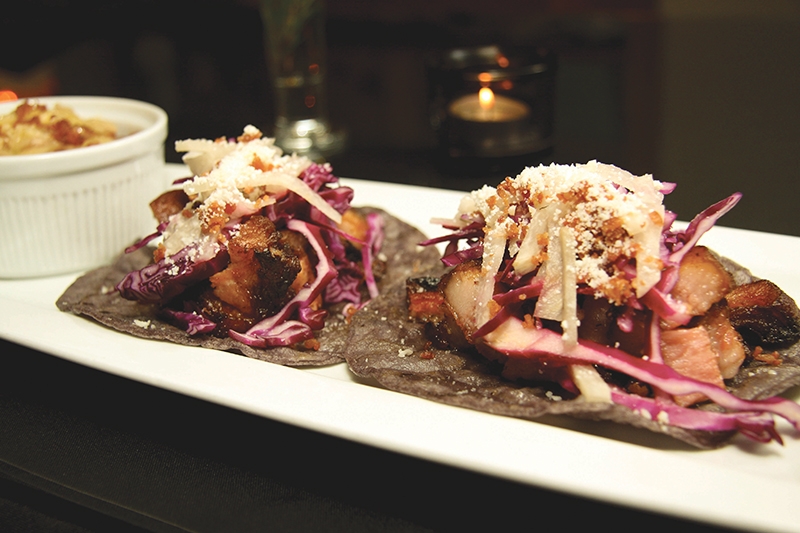 Up until recently, I never really considered Provo a place that cultivated any authentic type of food culture. It’s full of various chain restaurants, fast food joints and a few dives that offer a bit of local charm, but Provo’s food scene was almost nonexistent. That was until I attended Local First’s Celebrate the Bounty event, where three Provo sparkplugs brought their A-game: The farm-to-table virtuosos of Communal Restaurant, the Southwestern Native American pioneers of Black Sheep Cafe, and the regional comfort food experts of Station 22. I was fascinated by the diversity and presentation of their food, and, when Black Sheep took home the Best Taste award, I knew I had to make a pilgrimage into the heart of Provo.

All three of these restaurants can be found on University Avenue, between Second North and Center Street. Once you park, it’s no sweat to visit all three restaurants in one night—which I highly recommend. After sampling their cuisine and chatting with the people who make them tick, it wouldn’t be too surprising to see more independent restaurants start popping up in Utah County.

Black Sheep Cafe specializes in contemporary Southwestern Native American cuisine, which means fans of traditional Mexican food will be on familiar ground just long enough to get their minds blown by the Native American aspects of the menu. It’s owned and operated by Bleu Adams and her family: sister Katt Mason is co-owner and sous chef, her brother Mark Daniel Mason works as executive chef and their mother Alberta Mason is responsible for Black Sheep’s secret weapon—authentic Navajo fry bread. The venture began with the inspiration that Bleu and Katt gleaned from the traditional food that their mother would make while they were growing up on a Navajo reservation. “My mom is a great cook. When we were teenagers, I remember going around to the tribal administration buildings to sell burritos and desserts. These experiences made me really love and appreciate the effort that she put into making her food,” Adams says.

Adams’s decision to open Black Sheep in Provo was influenced by several different factors. Her parents went to BYU, and as she was already familiar with the culture of returned LDS missionaries living in Provo, Adams thought that Native American cuisine might appeal to the missionaries who have served on reservations. “The food’s a lot different than what you’d get on a reservation, but it’s familiar enough to draw them in and let us introduce them to more contemporary versions of the food they’ve already tried,” she says.

In addition to dishing up some truly authentic and delicious food, the restaurant itself serves as a living, breathing testament to the relevance of Native American culture in our society. “I wanted to create something that incorporated food, art and my culture, which are three things that I love,” says Adams. Just left of the entrance, you’ll find Winston Mason Design, where Bleu’s father meticulously crafts silver jewelry. The back of the restaurant has been converted into gallery space and has been set aside for the display of contemporary Native American art. And let’s not overlook the food. Black Sheep’s menu offers several authentic Southwestern options like posole and enchiladas, all of which are made completely from scratch. What makes this place special, however, is the Navajo tacos.

Black Sheep offers three variations of Navajo tacos: one topped with pinto beans that have been slow roasted in pork juices and topped with tangy queso menonita, and two topped with braised pork and either red or green chili sauce. Each of these is available individually, or diners can get the Navajo Taco Trio ($17.00) with smaller versions of all three—a great idea for date night. I opted for the Trio, and though I could have easily scarfed all three of these delectable dishes, I split the entrée with my wife. The anchor of the dish is the homemade fry bread ($4.00)—it’s warm and pillowy, yet more chewy than soft. You can’t really lose no matter what topping you get, but my personal favorite was the pork in red chili sauce. It’s this magically rustic blend of earthy spices distilled into a sauce that made the slow-roasted pork sing. The sauce is spicy, but not aggressively so—it strikes a comfortable relationship between heat and flavor, which can be difficult to achieve. The green chili sauce is less spicy and more herbaceous—it works with the pork in a completely different and delicious way.

If you’re lucky, Black Sheep will still be featuring the Hog Jowl Tacos ($9.00), which earned them the Best Taste award at Celebrate the Bounty. They consist of homemade blue corn tortillas stuffed with shredded meat taken from, yes, the jowl of a hog. Hog jowl has the same flavor as pulled pork, but it’s much more tender—the stuff melts in your mouth. The tacos are finished with pickled jicama and a sweet maple bay leaf barbecue sauce. A single bite fills the palate with the salty jowl, the acidic jicama and the sweetly smoky barbecue sauce—a combination that offers an ideal bite of food.

Desserts have always been tricky for me. I’ve been to many restaurants that offer great food, but see their dessert menu as an afterthought. Black Sheep offers a dessert that I still think about in the wee hours of the evening. It’s known as Pumpkin Chocolate Chip Bread Pudding ($8.00), and it’s fantastic—two triangles of pumpkin bread baked with chocolate chips from Orem’s Amano Artisan Chocolate, served warm and soaked with a caramel bourbon sauce. The warm bread soaks up all that gooey chocolate and caramel for a truly decadent taste of autumnal flavors.

Within the last few months, Black Sheep has added several local beer and wine options to their ever-expanding menu. Diners can now find beer from local breweries such as Epic, Squatters and Uinta along with a fully stocked wine list. In addition, Katt Mason has collaborated with Chef Mark Daniel Mason to create some unique cocktails to complement their menu. Diners can look forward to enjoying Cactus Pear Margaritas and Chipotle-Cilantro Bloody Marys along with their Southwestern menu.
During my conversation with Adams, I came to the realization that the reason Black Sheep’s food tastes so good is because of its rich cultural tradition. The food that you get here has been perfected with years of traditional preparation, and it’s made with ingredients that are all found locally. Black Sheep Cafe is definitely a restaurant worthy of a trip to P-Town.