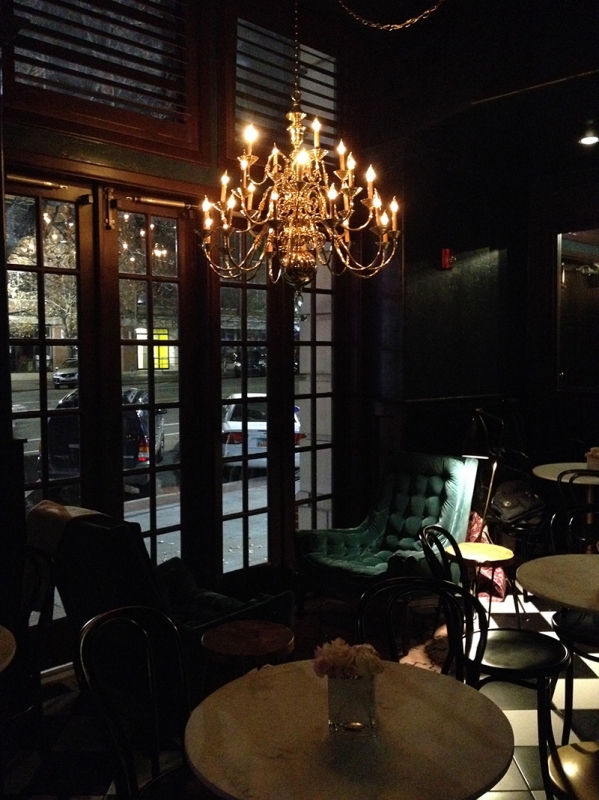 Finca, a locally sourced Spanish tapas restaurant, has moved from their 1291 S. 1100 E. location to 327 W. 200 S. Upon entering, I was mildly surprised by how pleasantly swanky the new digs are. The cityhomeCOLLECTIVE designed the space: The walls are a dark-blue hue with dark-wood pillars lending the space depth, and some of the checkered floor tiles are black and white. It’s beautiful, and the overall lighting was just right for the occasion. The bar is at the right once through the entrance, with a gorgeous, oval mirror—if The Rest is an enigmatic library of a bar, Finca is an elegant boudoir. Antique-looking green couches underneath a lavish chandelier are at the front end of the restaurant, and a lounging space is near the middle with terra cotta–colored couches that seem a bit more modern. Booths flank in the center seating area of chairs and tables.

Local coffee roaster Charming Beard has opened their coffee shop, La Barba, in a portion of the same space to share with Finca, which is to the left of the entrance, in the northeast corner of the space—where the churros could be found. Finca offered three types of dips for their piles of churros: Dulce de Leche, Guava and Spiced Mezzo Chocolate. My favorite was the Ducle de Leche, as its caramel-like sweetness recalled the heavenly delight that is flan; the Guava is sweet and fruity, and the Spiced Mezzo Chocolate invoked Christmastime cinnamon flavors. No matter the sauce, though, one couldn’t go wrong!

Finca has won awards for their cocktails, and they gave attendees a tease of their liquor magic. The St. Mary’s Rosary was the “house cocktail” for the evening, and its sweet tones brought out the contour of the Vida Tequila. The Limmer’s Gin Punch was a fizzy delight, and also sweet—ideal for a summer evening on the porch.

We sat in one of the seating enclaves at the east side of the new Finca, touting flower-print wallpaper, which is a nice touch. The lights were quite dim in this area—most likely for this specific event—and I imagine the turned-off above-head lights would be turned on for regular dining. Servers brought plates around with individual servings of a few of their tapas. The first nondessert I indulged in was the lamb-and-pork Albóndigas, my favorite item at Finca. They tasted as succulent as ever, dripping with hearty tomato sauce. We sat next to the paella station: The paella was adorned with mussels and clams, and included fennel and other seasonal vegetables. It was sticky but not soggy, and the mariscos complemented it well.

La Barba offered a decaffeinated light roast, which, rather than burning the coffee beans, had been decaffeinated by natural chemistry. Though the decaf wasn’t particularly dynamic for me, it stood as a solid brew and made for a good nonalcoholic digestif of sorts. Had I discovered the Crema Catalana station sooner (in the next structural enclave over), I’d have paired them together. The Crema Catalana is a custard (more or less crème brûlée) with a slightly burnt top for a campfire-marshmallow effect, and eating it with sage offered it some earthy tones. It’s to die for. Eating it with the white Lo Brujo Macabeo Calatayud 2013 wine lent it a banana-cream effect. Said wine was chilled and exuded white-grape flavors throughout, amid other fruity notes. The red-wine counterpart by Santa Giustina, in a giant bottle, had a cherry-like aroma, and was sweet upfront with a dry finish.

Cerdo Tirado y Piquillo, pork-stuffed piquillo peppers, also went around—another of my favorites, and it wasn’t even my birthday. The meat seemed even more sweet and juicy than ever, which made me rejoice that Finca now has a larger kitchen in which to work. The platter featured carrots cooked with cumin that included saffron aioli, and tasted sweet not unlike yams.

Their food has solidified that Finca will continue to be one of my favorite SLC restaurants. Downtown is an apt area for the restaurant, and I’m excited to see what the new space does for their cocktail program. CityhomeCOLLECTIVE did a fantastic, classy job with it. Although, the highly manipulated photos made to look like paintings aren’t my favorite—I would have liked to see something more in the vein of old black-and-white photographs (on film) that would bolster the classy vibe, but it is a small detail. I will definitely patron Finca much more now that it’s in Salt Lake City’s nucleus. ¡Bravo!