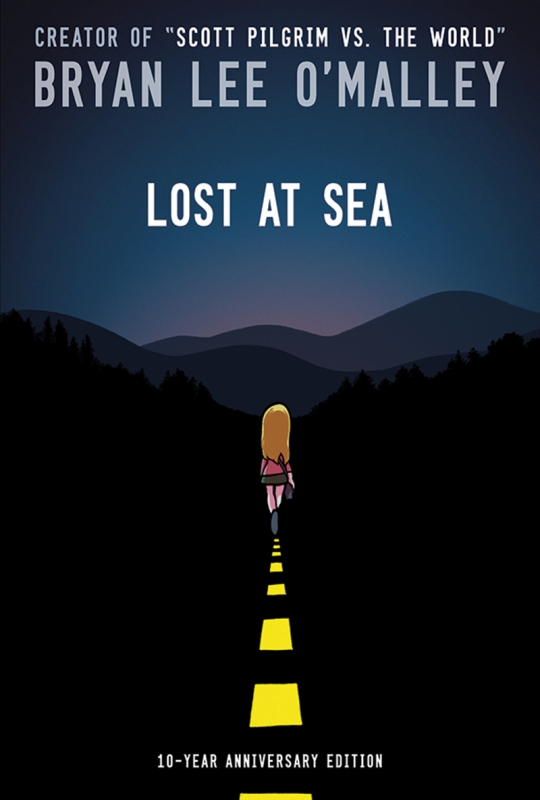 Before the Scott Pilgrim series came around and launched O’Malley into the mainstream spotlight, he was an artist producing work for Oni Press on various titles, eventually getting his own graphic novel in 2003 called Lost At Sea. The self-discovery story centers around an 18 year-old girl named Raleigh, returning to Vancouver after visiting her online boyfriend and her estranged father. Returning with fellow ex-high-school students she ran into on their own Pacific Coast roadtrip, the small adventure ends up in the group looking for her soul, which has been stashed away in a stray cat by The Devil. The story subtly but beautifully examines the post-teen angst of trying to figure out who you are and why you are that way. For this special hardcover edition, the artwork has been given a special faded orange/black look which only adds to the feeling of being on the open road and staring off into the distance as you ponder deep thoughts of love, loneliness, purpose and the future in general. Along with bonus short cartoons and artwork not used before in the collection, this anniversary edition makes O’Malley’s original piece shine brighter than it did a decade ago. –Gavin Sheehan

Full disclosure: I’m a card-carrying Metalli-basher. I paid fanclub dues, wrote an 80-page university-level thesis on the band, and though I can admit that St. Anger is one of the band’s (if not an entire genre’s) worst showings, I own it. What I’m saying is that I’m wholly biased on the Metallica story. The fall from grace has happened and redemption is highly unlikely, but it’s like a story that’s so goddamn Shakespearean, I just can’t stop watching it play out. Vol. 1 is the band’s early days (i.e. the “easy to like” period from inception to ‘92), and while there’re a few decent ‘Tallica tomes on the market (notably Mick Wall’s Enter Night), this one gets my vote for being heavier on the anecdotal nuggets and lighter on the bloated rock-philosophizing. The story about Cliff Burton moving fans aside with a ball-peen hammer gets my ultimate vote, and neither author skimps on calling out Lars Ulrich. There’s nothing to complain about and more than enough for heads to dig into. Seek it out. –Dylan Chadwick

Pedal Forward: The 10 Life and Business Lessons I Have Learned On My Bike
Trey Hall
Cairn Publishing Denver LLC
Street: 10.01.13

Trey Hall and his friend Ken Calwell were struck by a truck while they were on a long bike ride. Both riders were horribly injured in the accident, and both had astonishing recoveries. Trey Hall pulls from his experience riding his bike and recovering from his accident to share 10 lessons that teach us how to be more successful in business. He uses his experience to explore how cycling practices can impact business decisions and life choices as well as how they serve as a driving force in his astonishing recovery. Hall does a great job relaying why it is important to find what drives you and to use that as a motivational factor in your own life. His writing is casual and easy to embrace in this short read. As I read Hall’s encouraging story, I found myself being constantly reminded of lessons learned in my own life where I have found myself grasping the big picture: being patient and always moving forward. –Ben Trentelman