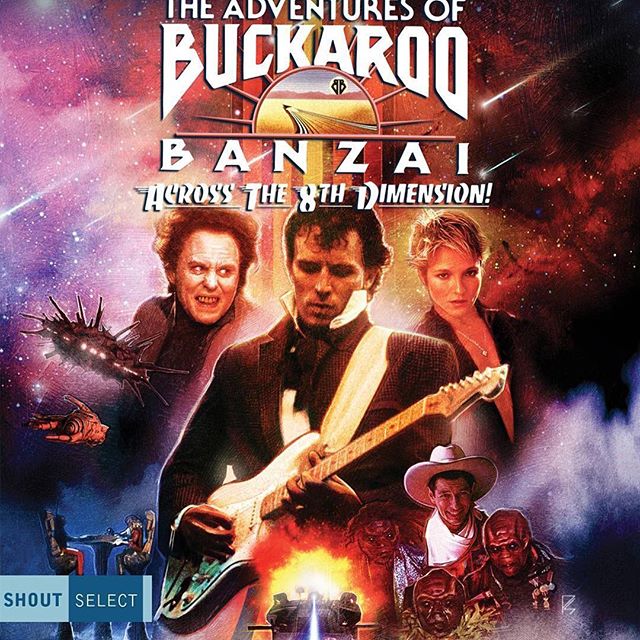 Review: The Adventures of Buckaroo Banzai Across the 8th Dimension

The Adventures of Buckaroo Banzai Across The 8th Dimension was first released in 1984 and stars Peter Weller as the title character, Dr. Buckaroo Banzai. Banzai is a modern-day Renaissance man. He is a multi-instrumental rockstar, physicist and neurosurgeon, and he leads a crack company team, The Hong Kong Cavaliers. The film revolves around the unintended consequences of the testing of the oscillation overthruster—a device that allows one to travel through solid matter and into another dimension. Due to the oscillation overthruster’s immense power and dangerous appeal, Banzai and his gang, along with the help of the alien Black Lectroids from planet 10, must save the world from the evil from the eighth dimension, the Red Lectroids, led by the maniacal dictator Lord John Whorfin (John Lithgow).

The plot is simple: bad aliens vs. good guys who are helped by good aliens who will obliterate the Earth unless the baddies are stopped. Banzai is the definition of cool, as he breathes charisma and seemingly always knows what he is doing in any circumstance. Buckaroo Banzai is a quirky watch but a must-see. It is overly silly, simplistic and utterly charming. No wonder it is deemed a cult classic. I mean, this is the movie that boasts the infamous and honest quote, “Wherever you go, there you are.” It’s a saying that can be pulled out of thin air or one’s back pocket and still maintains relevance, no matter the context. The Adventures of Buckaroo Banzai requires no serious or controversial thought, and it risks no mental numbing—it’s just plain fun.

If you haven’t seen The Adventures of Buckaroo Banzai Across the 8th Dimension, then make haste to pick up a copy wherever it may be available. The film features a star-studded cast that includes Jeff Goldblum, Christopher Lloyd, Ellen Barkin and Clancy Brown. This new release has some sweet bonuses, too. It includes a two-hour retrospective documentary with new interviews from the cast and crew and a “Buckaroo Banzai Declassified” featurette on the second disc. Other bonuses include deleted scenes, trailers and audio commentary from Director W.D. Richter and writer Earl Mac Rauch. There is even an alternate opening that has Jamie Lee Curtis.

Films like these have a certain quality and grace that is largely lost on today’s cinema, which prefaces stupidity and shock appeal over elegance. That, and Buckaroo Banzai is kind of silly, but in the best of ways. This is the kind of film that will always—providing good taste continues to exist—be timeless. Though the plot could be a little thicker, the delightful nature of this movie remains ever apparent. It’s really just something else, much like anything that must be experienced at least once. So, go out unto the world and acquire The Adventures of Buckaroo Banzai Across the 8th Dimension for your movie collection. Make some popcorn, sit back and dig this. –Nick Kuzmack