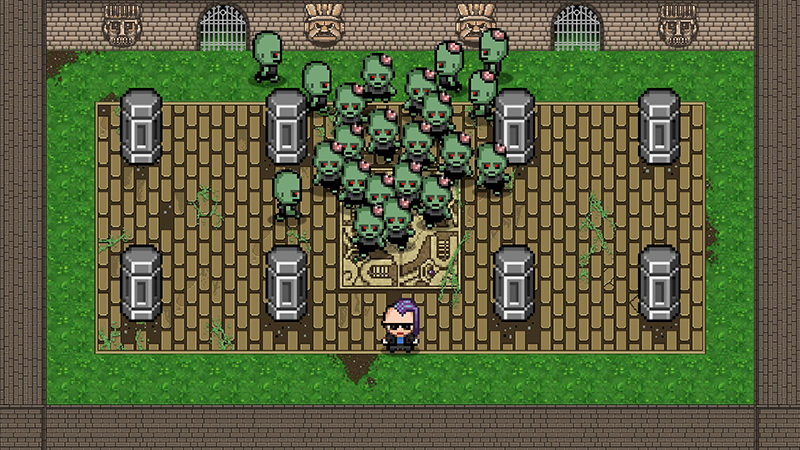 As far as retro, four-player deathmatch arena games go, DiscStorm only does a few things right. What it does get right, however, it gets really right. The game is sorely lacking in story and complexity, but its frenzied combat and nostalgic gaming landscape have been polished to a healthy glow. In DiscStorm, players choose from one of five different characters and are thrown into an isometric arena, similar to a level that one might find in the original Legend of Zelda. The purpose of being in this arena is to kill everything in sight by chucking frisbees at them—and that’s about it. The primary challenge of this frisbee-centric killfest is limited ammo. Since each player can only hold three discs, they have to find creative ways to retrieve their weapons while avoiding damage.

My biggest gripe with this game was the inexorable sameness of the available characters. Sure, they all look different when they hit the arena, but each character has the same amount of discs and the same ability to dash around the level when they run out. The joy of entering the glorious field of pixelated battle is doing so with an avatar that embodies a player’s strategic mindset, as in, “I’m not great with Ryu but I’ll yoga-fire your ass into next week with Dhalsim.” Not only does the lack of character abilities hurt the enjoyment of combat, but it also shortchanges the characters themselves. DiscStorm packs a roster of colorful characters, but the fact that none of them can show their individuality with secondary abilities makes them feel one-dimensional. The additional outfits that players can unlock by playing through the campaign are lovely, but they don’t quite fix the problem.

The game’s multiplayer mode manages to take the monotonous combat mechanics and whip them into a chaotic storm of discs—a disc storm, if you will. The discs rebound off of the walls and obstacles in a given arena, making the first few bouts merely about survival. The more familiar players get with the combat and movement mechanics, however, the more prone they will be to developing some interesting strategies. For example, if a player has a disc in their arsenal, they can execute a spinning shield move that sends an enemy disc back the way it came. Once this happens, all bets are off—that sucker can kill its owner just as easily as anyone else. It’s a great time to call upon any air hockey skills, as some of the most satisfying moments come from smacking an opponent in the back of the head with a well-placed ricochet.

From the single-player perspective, DiscStorm is not as strong. Levels consist of five waves of increasingly difficult enemies, punctuated by boss battles along the way. The levels range from haunted mines to hostile pirate ships, the enemies look awesome—artistic design is something that this game does extremely well—and the boss battles are unique enough to be memorable. The problem with the campaign mode is that the levels and boss battles feel just a hair too long. As great as the bosses look, fighting them seems like an eternity of toss disc, grab disc and repeat.

In many ways, DiscStorm is a great revival of the NES glory days. The controls, graphics and level design were laid out with a striking resemblance to the 8-bit era. Games—and gamers—did evolve, however. Revisiting the nostalgia of the past is great, but there are thousands of games out there that look like they were originally released in 1986. Let’s inject some freshness into that pretty little package, and we might have something.